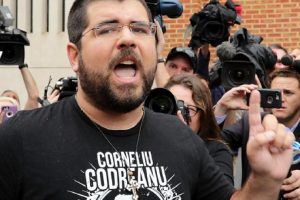 When I first wrote about the growing popularity of Eastern Orthodox Christianity among those on the far-right for Religion Dispatches in November of last year, I was regularly told that Matthew Heimbach’s excommunication from the Orthodox Church was the end of the problem. They told me that in making connections between the so-called alt-right and Orthodoxy I was overreacting.

But last week, there was Heimbach, at the center of those organizing the “Unite the Right” march in Charlottesville—and marching, as Inga Leonova writes at Fordham’s Public Orthodoxy, while “waving ‘Orthodoxy or Death’ banners.”

The events of the past week make it shockingly clear that with reference  to the growing threat of white nationalist groups, overreacting may not be the problem. I feel this especially because I spent the week before the events in Charlottesville researching the converts whom Orthodox Christianity and white supremacy share.

My guide into this world was Tim (who asked that I not use his real name). Tim inquired on Facebook  if I had written the article referenced above and I said yes, expecting the same apologia I had received before. Instead, I was introduced to dossier of evidence that suggests that the “nationalist problem” is far from contained and presents a serious, ongoing challenge for American Orthodoxy.

While the Neo-Nazis and Neo-Confederates may be relatively few in number, there is increasing evidence that Orthodoxy has become an integral part of the ideological and recruitment apparatus within some segments of the white supremacist movement. Importantly, these ideas and the converts to them are being tolerated, and frequently exploited, by much more powerful voices. This growing attachment to Eastern Orthodox Christianity  among a segment of white nationalists has serious implications for more mainstream currents in contemporary Orthodox life.

From the minute he first spoke, I couldn’t help but think that Tim sounds like a lot of guys I grew up with, if slightly more earnest. This makes sense as we both come from  the suburbs of Denver, Colorado. In fact, Tim became Orthodox  at the Assumption of the Theotokos Greek Orthodox Cathedral in Glendale, Colorado. That’s the church my family has attended since my grandparents arrived in Denver in 1959. And while Tim and I never knew each other, we knew a lot of the same people at“the Cathedral.”

Tim told me that he came of age in the “anti-racist skinhead movement” and spent a few minutes regaling me with his tales of street fights against various infamous Denver-area Neo-Nazis.  It was from this background, which undoubtedly leads to a sensitivity for finding fascists everywhere, that Tim started to notice that something was going on amidst in the world of the Orthodox internet.

While Orthodoxy tends to draw a pretty conservative crowd (especially among its converts), Tim began to see  Facebook posts and websites that crossed the line between very conservative and  dangerous nationalism. So, Tim did what people do in the 21st century when they discover something that angers or frightens them—he started a Facebook group. He made the group secret and carefully selected who he invited to it. It became a sort of Scooby squad looking for white supremacists of various stripes hiding in plain sight within Orthodox parishes across America, using the Orthodox Church to add legitimacy to their message.

When Tim invited me into the group (as an observer for this article—not as a participant), two situations had taken center stage. First, one of the people that the group had been tracking had threatened to sue. Tim and a few other group members sent me some of the posts that had first drawn the group’s attention and a screenshot showing that this man counted Matthew Heimbach among his Facebook friends. He also attends another mainstream canonical  Orthodox Church in America (OCA) in Ohio. This parish had an active prison ministry and Tim feared that that this was a fertile recruiting ground for a white nationalist.

There was also a  small upheaval about a Russian Orthodox Church Outside of Russia (ROCOR) parish in Lenoir, Tennessee. Members in the anti-fascist Orthodox Facebook group believed that known white nationalists, neo-Confederates and neo-Nazis were in the parish. The group members had left negative Facebook and Google reviews and now the priest’s son was trying to contact them.

I reached out to the priest’s son as well. His reply read,

There was a massive misunderstanding about our parish on the internet spread by people who have never been to it. I reached out to these people to correct that issue, not to talk about any conspiracies within Orthodoxy in general. Our parish is not Neo-Nazi or Neo-Confederate.

And despite some very questionable things posted by parishioners, I think he is basically right. The parish isn’t “Neo-Nazi or Neo-Confederate.” But there is much to suggest that the parish is perhaps a bit too tolerant of those who are.

And that extreme tolerance for some dangerous (and by the Church’s own standard heretical) views, may very well be the real problem.

One name that Tim mentioned early on was one that I had heard again and again: Matthew Raphael Johnson. Johnson was also present in Virginia this last weekend.  He has a Ph.D. from the University of Nebraska and is, for what it is worth, the intellectual powerhouse of Orthodox nationalism in America.

Johnson’s podcast is on the TradYouth website, the cyber arm of  the Traditionalist Workers Party (the political party founded by Matthew Heimbach and his political collaborator and father-in-law Matthew Parrott). For years, Johnson was a priest in a breakaway Orthodox group called the Old Calendarist Greek Orthodox Autonomous Orthodox Metropolia before being defrocked for phyletism (essentially for being a racist).

And yet, even from these far-off margins of the Orthodox world Johnson has managed to have an impact on the mainstream. His books are Slavophilic revisions of Eastern European history and completely marginalized in academic circles. His first book The Third Rome: Holy Russia, Tsarism and Orthodoxy, however,  enjoyed enough mainstream acceptance within Orthodoxy that it first came out it was sold at the canonical  Orthodox Church in America (OCA) parish I attended in college.

Johnson’s books and podcast, The Orthodox Nationalist, push the same brand of nationalism that adherents refer to as “traditionalism.” This ideology, which attempts to distance itself from more recognizable white supremacy, blends nationalism  with an anti-globalist agrarianism that in many ways does not sound dissimilar to the rhetoric coming out of the White House.

Yet among the traditionalists, one finds a whole host of other, far more rare, beliefs—many of which find more than a passing precedent in more conservative, but still decidedly mainstream, strains of Eastern Christian thought. There are, for example, monarchists, calling for a restoration of Imperial Russia or even a new Byzantine Empire.

While this may seem extreme, a strain of pro-monarchism runs through a great deal of even modern Orthodox thought, particularly within the Russian tradition where Tsar Nicholas II and his family are venerated as “passion-bearers.”

So how do teenagers in Appalachia end up advocating for a re-imaged medieval Eastern Christian empire? And why have these people been allowed to remain in ordinary Orthodox parishes around the country?

The best answer I can posit: anti-Semitism and homophobia. These are the shared beliefs that allow extremists to lurk in plain sight, co-opting whole parishes to their mission. This is, of course, not to say that all Orthodox Christians are anti-Semitic and/or homophobic. The vast majority are not. But the simple fact is that the institutional Church has been casual in challenging the most egregious public statements made by some of its more visible adherents, clergy and laity alike.

When high-profile, decidedly mainstream Orthodox converts like Rod Dreher promote the idea that modern society has become so corrupt that Christians should separate themselves from society completely and cites gay marriage as his “case-in-point,” what message does it send to other, less-refined discontents? What about when a respected theologians questions about the anti-Semitic nature of the Holy Week prayers becomes an internet firestorm of abuse?

There is no evidence that the institutional Orthodox churches in America, its clergy, and the vast majority of its laity has anything but disdain for these extremists co-opting Eastern Christianity. The episcopal hierarchy of American Orthodoxy has been slow to respond to the events in Charlottesville but there has, a week later, finally come a statement from the Assembly of Canonical Orthodox Bishops of the United States of America—a response that while delayed was unusually strongly worded for the Assembly

Before this, only one major jurisdiction released a statement: The Orthodox Church in America. It is worth noting that this statement makes, if not explicit, clear reference to those within the white supremacist movement who have attached themselves to Orthodoxy. The statement reads, in part:

At the same time, we exhort our clergy and faithful to reject any attempts by individuals or groups to claim for themselves the name of “Orthodox Christian” in order to promote racism, hatred, white supremacy, white nationalism or neo-Nazism.

If nothing else, this single sentence is the most clear and public official acknowledgement made by the official Orthodox hierarchy that there is a problem with nationalists within the church.

If this statement will manifest into any real action remains to be seen. But what cannot be ignored is that  when you are tolerant of some kinds of extreme hatred, it opens the door for other less socially acceptable forms of hatred. It sets the Church up to be a mouthpiece of white supremacy and extreme nationalism.

It is obvious why American Orthodox Christians want to minimize the problem as much as possible. It touches too closes to so many self-inflicted wounds. But if something is not done, there is a real danger that American Orthodoxy will be further implicated within the white nationalist movement. And ignorance, especially willful ignorance, is no defense.