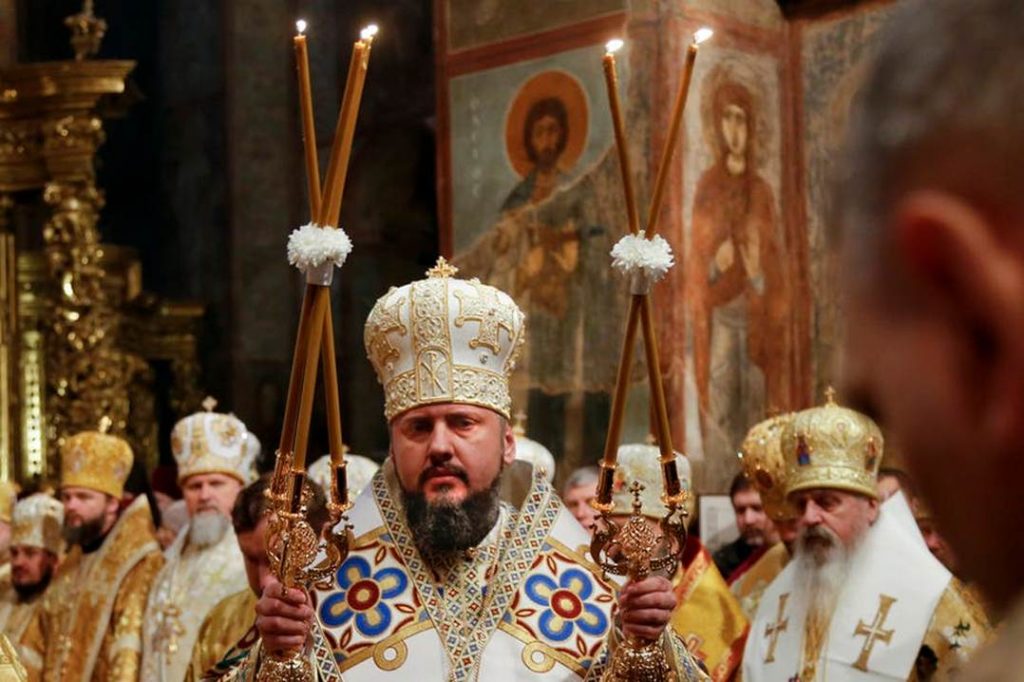 Metropolitan Epiphanius, head of the new Orthodox Church of Ukraine, which is newly independent of the Russian Orthodox Church. AP Photo/Efrem Lukatsky

A new Orthodox Church was recently established in Ukraine.

This competition between the churches of Constantinople and Moscow for dominance in the Orthodox Christian world is not new – it goes back more than 500 years. But the birth of the new Orthodox Church in Ukraine opens a new chapter in this history.

So what is Ukraine’s new church, and how will it change the global political and religious landscape?

The Patriarchate of Constantinople is considered the most important of the world’s 15 independent Eastern Orthodox churches. Although Eastern Christianity is less hierarchical than its Western Catholic counterpart, the Patriarch of Constantinople nevertheless has great authority over the Orthodox world.

This authority stems from Constantinople’s claim to primacy, which is rooted in its early history.

In the fourth century A.D., Emperor Constantine made two decisions that changed the world: he made Christianity the official religion of the Roman empire, and he moved the capital of the Roman empire from Rome to the then-modest city of Byzantium, later renamed Constantinople after the emperor.

With the fall of Rome in the fifth century A.D., Constantinople became the uncontested center of the Roman empire, making Byzantium the center of Christian power.

In the centuries that followed, the Patriarch of Constantinople challenged the universal authority of the Pope in Rome on both theological and political grounds. In 1054, this contest between Patriarch and Pope culminated in the “Great Schism,” which split the Christian world into the Catholic “West” and Orthodox “East” – a division that has shaped politics and religion to this day.

Constantinople retained its position as the imperial center of Christianity for a millennium, until the city fell to the Ottomans in 1453 A.D. Importantly, even after the fall of the Byzantine empire as a political order and the change of the city’s name from Constantinople to Istanbul, the church retained its original name. It is the last remnant of Byzantium in the modern world.

With Constantinople’s fall, Orthodox Christianity became a minority faith under Islamic rule. Moscow’s Orthodox Church became the most powerful Eastern Christian church on sovereign territory. This allowed it to position itself as the heir of the Christian empire.

From Kiev to Moscow

Until the 16th century, Moscow remained under the religious authority of Constantinople for 300 years. But once Moscow felt powerful enough to assert its authority over Constantinople, it leveraged its position as the largest and wealthiest Orthodox church to establish its own patriarchate, the highest religious body within Orthodox Christianity.

Ukrainian Orthodoxy was under the jurisdiction of the Russian church for over 300 years, until 2019.

The reasons for this were pragmatic.

Ukraine’s position as a borderland between Western and Eastern Christianity placed Ukrainian Christians between the authority of Moscow, Rome, and Constantinople.

After Kiev’s fall to the Mongols in the 13th century, Ukraine was caught between two powerful neighbors with opposing religious identities: to the East, Orthodox Russia, and to the West, Catholic Poland-Lithuania.

In the 1600s, Ukraine found itself under pressure from Catholic neighbors intent on converting Orthodox Ukrainians to Catholicism. For Constantinople, this made the value of protection from a powerful Orthodox neighbor apparent, and it turned to Moscow for help. In 1686, Constantinople placed Ukrainian Orthodoxy under Moscow’s authority.

The Orthodox Church of Ukraine

Since Constantinople had authorized Moscow’s original claim to Ukraine in 1686, today’s Ukraine needed Constantinople to break the ties that bound Ukrainian Orthodoxy to Moscow.

But why does Ukraine want to break these ties now?

Throughout Ukraine’s ongoing war with Russia since 2014, the Ukrainian state has grown more vocal in its support for an independent Ukrainian church. Ukraine’s leaders cast Ukrainian Orthodoxy’s break from Moscow as the final step of Ukraine’s journey to political independence.

All three vied for the position of national church of Ukraine on different grounds.

Although the three churches had no doctrinal differences, only the church under the Moscow Patriarchate was recognized as legitimate in the greater Orthodox world. The other two churches were independent, but considered illegitimate, or “schismatic,” by both Constantinople and Moscow.

Even with state patronage then, Ukrainian Orthodoxy needed religious support if it was to get an independent church that was also theologically legitimate.

The church of Constantinople provided the solution to this problem.

Given this complex religious landscape, Constantinople did two things to establish a new Ukrainian church independent of Moscow. First, on Oct. 11, 2018, it revoked the 1686 decision to grant Moscow jurisdiction over Ukrainian Orthodoxy. Then, on Dec. 15, Constantinople recognized Ukraine’s two “schismatic” churches as legitimate after which they united and held a council to adopt a common charted and elect a leader.

Finally, on Jan. 5, at a ceremony in Istanbul, the Patriarch of Constantinople gave the new Metropolitan of Kiev and all Ukraine, Epiphanius I, the tomos of autocephaly – a church document proclaiming the church’s independence from Moscow.

My work on the history of religion and politics shows that old religious disputes continue to shape modern politics.

Orthodox churches beyond Ukraine are now forced to choose between Moscow and Constantinople. The conflict over Ukraine has moved to the global stage.