[ditty_news_ticker id="27897"] Why were the Kidnapped Bishops not Released along with the Azaz Captives? 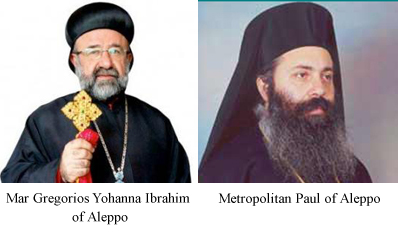 Like any news, this should be taken with a shaker of salt, but it’s consistent with a lot of what was said during the last few days of the negotiations to acheive the release of the Lebanese Shi’ite pilgrims kidnapped last year in Azaz, on the Turkish-Syrian border. The Arabic original can be read here.

What Prevented Metropolitans Yazigi and Ibrahim from Returning with the Lebanese Captives?

Despite the great joy that spread over all regions of Lebanon at the return home of those kidnapped in the Syrian city of Azaz, following the considerable efforts of the Director of General Security, Gen. Abbas Ibrahim, and the minister of the interior in the caretaker government, Marwan Charbel, this joy was not complete because of the continuing captivity of Metropolitans Boulos Yazigi and Youhanna Ibrahim, at the hands of armed groups of Syrian rebels.

In this context, Gen. Ibrahim was clear at the time of his arrival at Beirut International Airport in the company of the nine people who had been freed, where he announced that his mission will not be complete until the two metropolitans and other victims of kidnapping in Syria are released. This confirms that the director of General Security is the one basically delegated with this case, which was established during the negotiations which took place over the last few days.

In a related development, informed sources revealed to el-Nashrathat the release of the metropolitans had been expected to take place as part of the deal that led to the release of the Lebanese captives. This did not occur at the last moments, because of certain obstacles that continue to prevent it, although it is hoped that they will end in the coming days, through renewed negotiations.

The informed sources explained  that the basic obstacle is the demand on the part of the Turks for the release of Turkish intelligence officers along with certain members of the Syrian opposition who are detained by the Syrian government to coincide with the release of the metropolitans. It is noteworthy that the Syrian government has agreed to do this and has confirmed its readiness to do so during the negotiations. However, the Turkish side insisted that this take place in secret, something that the Syrian side refused, insisting that it take place openly.

The sources suggested that the Turkish demand was in order to avoid embarrassment, seeing as that the public release of Turkish intelligence officers would confirm Turkey’s role in the events in Syria, while it appears that the Syrian side wants to send a message to world opinion by doing this.

Within this context, the sources stressed that this matter will be pursued in a significant manner in the coming few days, especially given that there is a favorable atmosphere in terms of the regional and international situation. They pointed out that this factor was fundamental to the acceleration of negotiations for the release of the Lebanese captives. This evokes the words of the Minister of Labor in the caretaker government, Salim Jarisati, who stated that the Lebanese side seized the appropriate moment.

The sources explained the approaching date for Turkish elections will press Turkish Prime Minister Recep Tayyip Erdogan to offer more help, in order to achieve the release of the intelligence officers, especially given the longstanding difference in orientation between political and military authorities in Turkey, in addition to the emerging role of Qatar, which provided the greatest assistance during the negotiations for the release of the Lebanese captives.