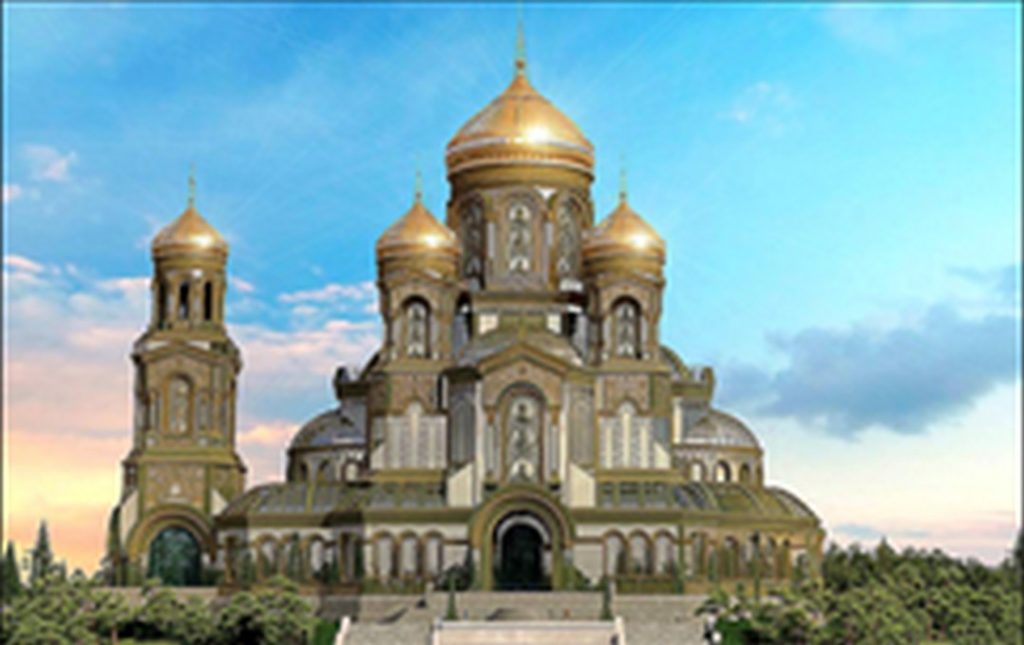 The Main Cathedral of the Russian Armed Forces was sprinkled with holy water by Patriarch Kirill in 2020, but that does not mean it is holy. It has forsaken the elegant curves of a traditional Russian dome to deliberately resemble nuclear missiles (which Russian priests have cheerily blessed). The classic two-dimensional apse mosaic of Christ has been swapped out for a tacky sculpture, defying centuries of Orthodox wisdom which traditionally eschewed three-dimensional representation. Defending the six billion ruble (US million) expenditure, one Orthodox priest said that “metal, wood, glass and talent were offered practically free, for a few kopecks. People worked, worked hard for the glory of God.” His statement calls to mind another priest, Aaron: “Then they gave me the gold, and I threw it into the fire, and out came this calf” (Exodus 32:24).

The Virgin Mary of course features prominently in the cathedral mosaics, and will be especially honored today, the Feast of the Annunciation (March 25). She is commandeered as the sponsor of the third Rome (Moscow) just as she once sponsored the second Rome (Constantinople) before that. Our Lady of Kazan, “the most widely revered icon in late imperial Russia” (322), is especially emphasized, as is the icon of She Who Reigns, named because she was discovered after the abdication of Tsar Nichols II in 1917. Both images deliberately afford a link between Tsarist and post-Soviet Russia.

Needless to say, the mosaics conveniently ignore that the famous Virgin of Vladimir (now housed in Moscow) was given by Constantinople first to Kyiv, or that the original Our Lady of Tikhvin was lovingly tended in the United States (Chicago, to be specific) during Communism. Chillingly, the Main Cathedral of the Armed Forces has even left space for “future conflicts to be added.” Perhaps, if the Ukraine invasion is eventually memorialized in this space, Russian mosaicists will be honest enough to show the Virgin Mary hurling a cluster bomb at a maternity ward.

But the real Mary is no shill for war. As much as the Virgin might appear to be a helpless hostage of nationalism, she is also its opponent. Vladimir Putin may pose with Mary’s belt to bolster Mother Russia, but Mary’s protective garments also failed the Byzantine emperors who Putin appears to be emulating. The Alexiad relates how Alexios I (1057-1118), took Mary’s mantle into battle and was defeated, forcing him to unceremoniously stuff the relic into a tree (67). Another Byzantine chronicle, moreover, depicts the Virgin predicting the disastrous Byzantine defeat at the Battle of Myriokephalon in 1176. More recently, the Black Madonna of Częstochowa is not credited with endorsing the Russian army, but, in the 1920 Miracle of Vistula, depleting their resolve to fight.

Which is to say, while Saint Javelin, the image of a Ukrainian Mary wielding anti-tank weaponry, has gone viral, Mary’s resistance to military aggression is nothing new. Depictions of Mary blessing the conquered are more pervasive than images of Mary blessing conquerors. Some Christians may imagine Mary consecrating weapons; but others, such as Maxo Vanka at St. Nicholas Croatian Catholic Church in Pittsburgh, imagine her destroying them.

The most famous example of such an image is the Virgin of the Passion, known in the West as Our Lady of Perpetual Help. This Orthodox icon was born in 1192 on the island of Cyprus on the losing side of the crusades. The icon thereby became an emblem of the defeated, and it spread far more widely than any image of Mary as a military mascot. Unlike her sister icons that are marshalled for war, this Mary looks to the angels with the instruments of the Passion hovering above her. The cross represents the imperial authorities of the first Rome who would crucify her son.

Despite her long history in Russia, there does not appear to be an image of the Virgin of the Passion in the Main Cathedral of the Armed Forces. Still, the true Mary’s mission is so pervasive that I wonder if she makes a covert appearance still. Just below an image of a Marian icon blessing the Russo-Turkish war, is a full length Virgin Mary standing in the ruins of Stalingrad, ruins which very much resemble the devastation that Russian army has left in its wake. As Mary cared for the besieged Russians whose city was obliterated by the German Luftwaffe, so she cares for those who the Russians are besieging today. This image, like the Virgin of the Passion icon, represents the actual Virgin.

Her idolatrous decoys make the real Mary all the more beautiful to behold.

Matthew J. Milliner is associate professor of art history at Wheaton College. He is the author of Mother of the Lamb: The Story of a Global Icon (Fortress Press, 2022).

Share. Twitter Facebook Pinterest LinkedIn Tumblr Email
Previous ArticleBehind the Frontlines of the Vatican’s Ukraine-Russia Strategy
Next Article OPEN LETTER TO THE SYNOD OF THE ORTHODOX CHURCH IN AMERICA ON THE WAR IN UKRAINE