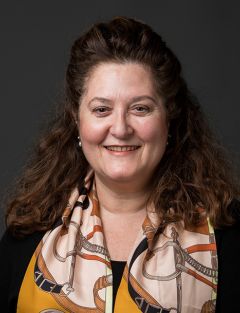 The Orthodox Christian Studies Center at Fordham University is delighted to present the sixth episode of its webinar series highlighting the scholarly insights and academic careers of female scholars whose research and writing explore some facet of the history, thought, or culture of Orthodox Christianity. The broadcast will be live-streamed and open to all who have pre-registered. The event will include some time for live audience questions. For those who miss the live event, the Center will archive each episode on its website and YouTube channel.

This episode features an interview with Dr. Elizabeth Prodromou. Prodromou is a faculty member at The Fletcher School of Law and Diplomacy at Tufts University, where she directs the Initiative on Religion, Law, and Diplomacy. She is non-resident Senior Fellow and Co-Chair of the Working Group on Christians and Religious Pluralism in the Middle East, at the Center for Religious Freedom at the Hudson Institute, and was non-resident Senior Fellow in National Security and the Middle East, at the Center for American Progress. She is a Co-President of Religions for Peace.

Prodromou served as Vice Chair and Commissioner on the U.S. Commission on International Religious Freedom (2004-2012) and was a member of the U.S. Secretary of State’s Religion & Foreign Policy Working Group (2011-2015). Her research interests focus on geopolitics and religion, with particular focus on the Middle East, the Eastern Mediterranean, and Southeastern Europe. Her current research projects concentrate on cultural heritage and institutional religious freedom in Turkey, as well as Eastern Orthodox Christianity in contexts of religious pluralism.