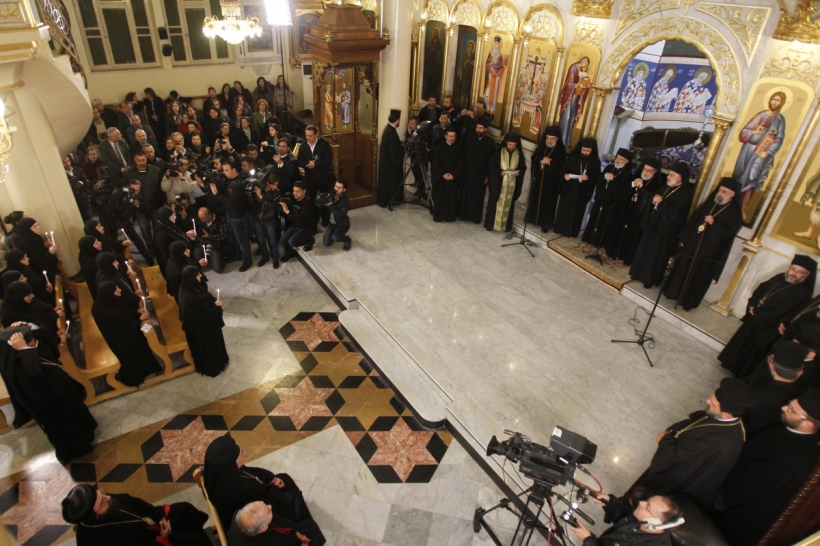 A view shows a prayer of thanks after the release of nuns at the Holy Cross Church in Damascus March 10, 2014.About a dozen nuns held by rebels in Syria for more than three months were released on Sunday and arrived back in Syria after traveling through Lebanon, officials and witnesses said. Witnesses at the Syrian border with Lebanon said the nuns arrived at the crossing early on Monday and headed toward Damascus in a minibus.PHOTO: REUTERS / KHALED AL-HARIRI

World Council of Churches general secretary Rev. Olav Fykse Tveit says the fervent prayers of Christians throughout the world were answered with the release of Greek Orthodox nuns kidnapped by rebels in the Syrian Christian town of Maaloula.

News agencies reported that a group of nuns from the Convent of St Thecla, abducted in December 2013, had been freed as part of a prisoner exchange.

In a letter sent to John X, Greek Orthodox Patriarch of Antioch and all the East, on 10 March, Tveit expressed “great joy” on the news.

The WCC head said, “Our prayers will continue not only for the freedom of these brothers and all those being held captive today.”

He also invoked prayers for an end to armed conflict in Syria and “for all people affected by the indiscriminate violence and humanitarian calamity in Syria.”

Tveit wrote, “Innocent children, women and men are being killed, wounded, traumatized and driven from their homes in uncounted numbers.

Since the conflict began in Syria, the Geneva-based WCC, which represents more than 500 million global Chritians has made several appeals for the cessation of violence in Syria and freedom for the abducted people in the country.

In a recent meeting with Pope Francis, Tveit also mentioned support of the WCC member churches towards efforts for peace in Syria.

“As the WCC, we do what we can to nurture the hope of peace with justice for the people of Syria and for the future presence and witness of the Christian churches in the Middle East,” he said.