BY BILLY PERRIGO AND JOSEPH HINCKS 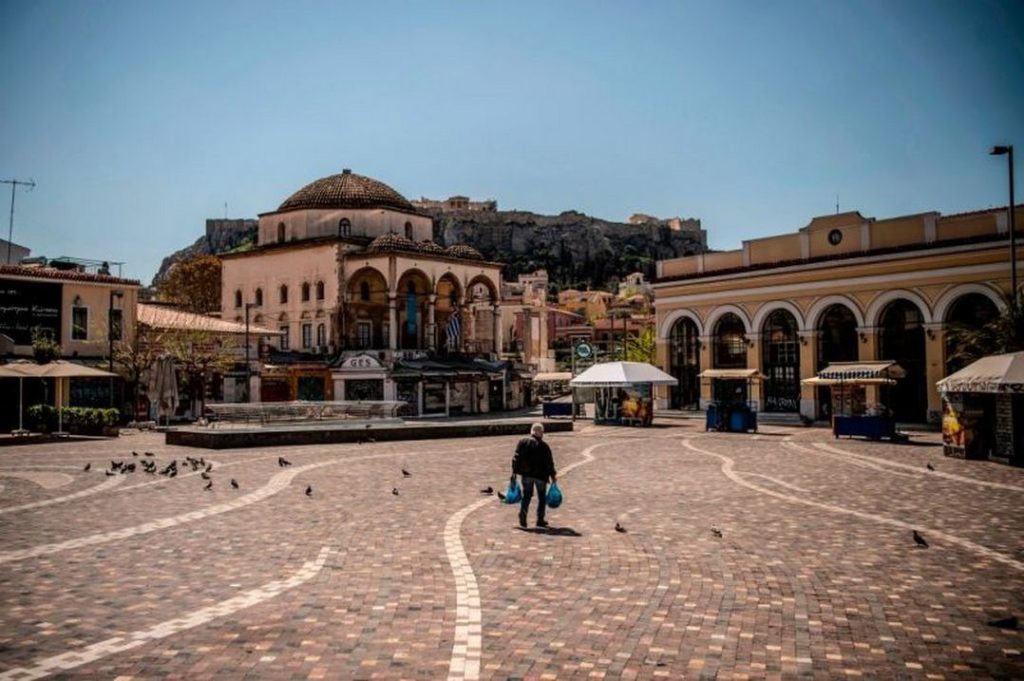 A man walks through the empty Monastiraki square, in central Athens on April 9, 2020, as the country remains under lockdown to stop the spread of Covid-19 disease caused by the novel coronavirus. (Photo by Angelos Tzortzinis / AFP) (Photo by ANGELOS TZORTZINIS/AFP via Getty Images)

This weekend’s Orthodox Easter celebrations in Greece were a low key affair for Michalis Stratakis and his wife Nancy. They still ate lamb, but the meat was oven-cooked instead of carved off a whole animal that had been spit-roasted for hours over charcoals. They painted eggs red according to Greek tradition and played games with family members in Athens, but over cell phone screens from their home on the Greek island of Crete on Sunday, rather than at the usual raucous feast of about 20 friends and relatives.

“It was heartbreaking, to tell you the truth, because we didn’t have the feeling of family,” says 44-year-old Stratakis, an accountant. “We spoke to them through the camera, but it’s not the same when you can’t hug your parents and your sisters and your friends.”

Still, Stratakis is aware that the pared-down Easter celebrations were a necessary sacrifice to protect elderly relatives and his country, too. Greeks traditionally depart urban centers for the countryside and islands in advance of the Orthodox calendar’s most sacred date. But this year, authorities monitored churches, enlisted street patrols, and deployed drones to enforce strict bans on movement amid a plethora of other measures taken to prevent the spread of COVID-19. Experts say that both the stringency of those measures, and the way Greeks have largely abided by them, have been key to Greece avoiding the worst ravages of the global pandemic.

How Greece is coping

The coronavirus outbreak in Greece should have been a disaster. As a popular tourist destination, Greece received 27.2 million visitors in 2019 alone—presenting a potentially significant risk of COVID-19 from international travelers. The country’s population is the second-oldest in the E.U. (behind only Italy), its health sector has been ravaged by austerity, and its crippled economy is still nearly 40% smaller than it was in 2008, before the last global financial crisis. Officials said in 2019 that, after three bailouts and drastic cuts to its public healthcare system due to austerity, there were only 560 ICU beds in the entire country of 11 million. (That’s 5.2 beds per 100,000 people, compared to Germany’s 29.2.)

And to make matters worse, the Greek Orthodox Church announced on March 9 that coronavirus could not be transmitted by communion wine or wafer — a doctrine that was immediately disputed by health experts. (The Greek Church’s governing Holy Synod subsequently said that Easter would be marked “on a small scale behind closed doors”, according to the Church Times.)…