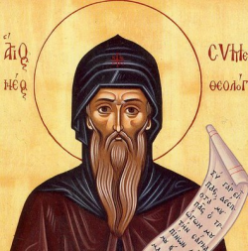 One of the most beloved Holy Fathers is St. Symeon the New Theologian, who was the abbot of St. Mamas in Constantinople. He is one of three great Fathers whom the Orthodox Church has granted the title of “Theologian”, because he is one of a few, in the history of Christianity, to ‘know’ God. The other two Theologians are St. John the Evangelist, and St. Gregory of Nazianzus (390 AD).

St. Symeon was born in Galatia in Paphlagonia (Asia Minor) in 949 AD. His parents, Basal and Theophana, were Byzantine provincial nobles. St. Symeon received only the basics of a primary Greek school education until he was about eleven years old. He finished his secondary education at the age of 14 in the court of the two brother emperors Basil and Constantine Porphyrogenetes. At 14, he met St. Symeon the Studite, who became his spiritual father and who led him into the life of asceticism and prayer. Although he wanted to enter the famous monastery of the Stoudion at the age of 14, his spiritual father had him wait until he turned 27.

During this period of preparation, St. Symeon’s elder continued to counsel and guide him, preparing him gradually for the monastic life even in the midst of worldly cares. St. Symeon occupied himself with the management of a patrician’s household and possibly entered the service of his emperor as a diplomat and a 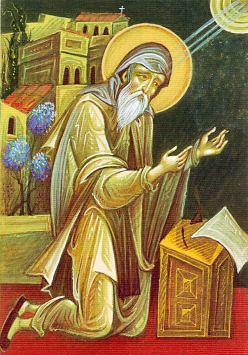 senator. While ‘busy in the world’ he also strove to live a monk’s life in the evenings, spending his time in night vigils and reading the spiritual works of Mark the Hermit and Diadochus of Photike. One of his elder’s advice was, “if you desire to have always a soul-saving guidance, pay heed to your conscience and without fail do what it will instil in you”.

His writings grew out of his preaching and from the spiritual direction given to those under his charge. He is a writer sharing his experiences in prayer and the Triune. The monks of Mount Athos eagerly read his works today, in this Century’s spiritual renewal. His works are also being discovered by the Roman monasteries, as they start to comprehend to wealth and beauty of his writings and personal experience.

St. Symeon’s words still speak to us today, even though he lived a thousand years ago. Of special note is his emphasises to return to the essence or spirit of the early Orthodox Church, and not merely depend on or shelter under the outward forms of Church life. His burning conviction is that the Christian life must be more than just a routine or habit, but rather it should be a personal experience of the living Christ.

St. Symeon the New Theologian died in 1022 AD. The saint’s feast is celebrated on 12 March. 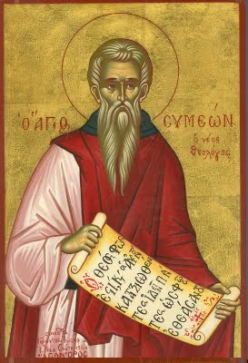 When a man walks in the fear of God he knows no fear, even if he were to be surrounded by wicked men. He has the fear of God within him and wears the invincible armor of faith. This makes him strong and able to take on anything, even things which seem difficult or impossible to most people. Such a man is like a giant surrounded by monkeys, or a roaring lion among dogs and foxes. He goes forward trusting in the Lord and the constancy of his will to strike and paralyze his foes. He wields the blazing club of the Word in wisdom. The Practical and Theological Chapters

Our holy fathers have renounced all other spiritual work and concentrated wholly on this one doing, that is, on guarding the heart, convinced that, through this practice, they would easily attain every other virtue, whereas without it not a single virtue can be firmly established.

For those who believe in Him, Christ will become all this and even more, beyond enumeration, not only in the age to come but first in this life, and then in the world to come. Thou in an obscure way here below and in a perfect manner in the Kingdom, those who believe see clearly nonetheless and receive as of now the first-fruits of everything they will have in the future life. Indeed, if they do not receive on earth everything that was promised to them, they do not have any part of foretaste of the blessings to come, their higher hope being set on the hereafter. However, it is through death and the resurrection that God in His foresight has given us the Kingdom, incorruptibility, the totality of life eternal. Given these conditions, we unquestionably become partakers of the good things to come, that is, incorruptible, immortal, sons of God, sons of the light and of the day, inheritors of the Kingdom of Heaven, since we carry the Kingdom within.

O holy father Symeon, you received divine illumination in your soul.
You were shown forth to the world as a most radiant light dispelling all darkness.
You call all men to seek the Grace of the Holy Spirit, which they had lost.
O righteous father! Pray unto Christ, our God, the He may grant us great mercy!