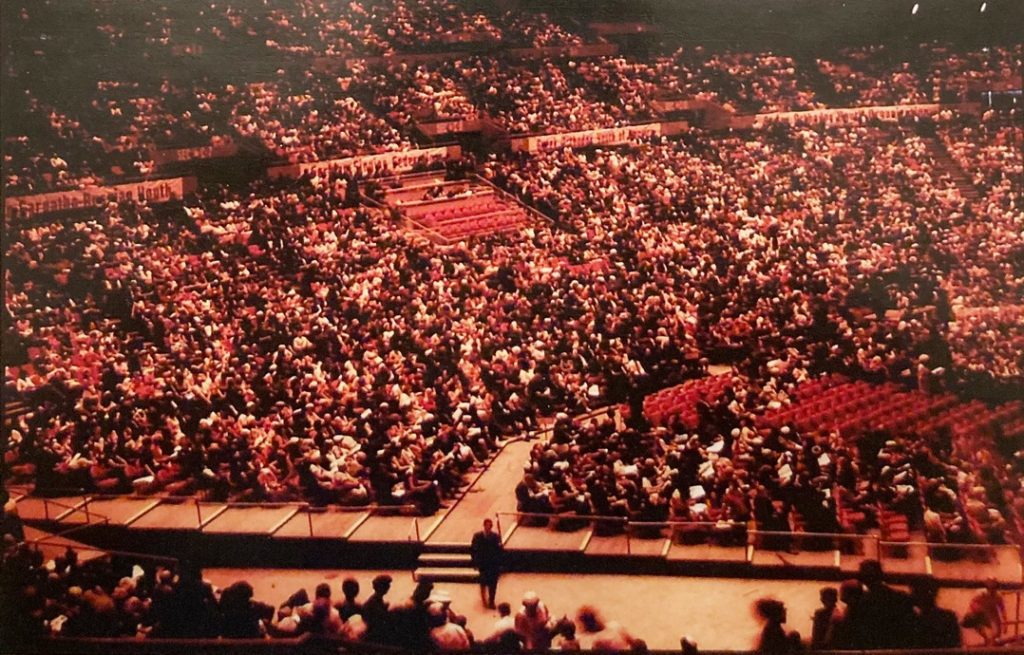 Council of Eastern Orthodox Youth Leaders of the Americas (CEOYLA) Gathering in 1967 at the Mellon Center, Pittsburgh, PA. Approximately 11,000-13,000 attended.

View the Declaration’s inaugural publication in the July 5, 2022 editions of
The Wall Street Journal and The New York Times

Over 370 Signatures to Date – Be One of Them!
Check below for the live count.

A Declaration for Orthodox Christian Unity in America

We believe that we are the most fortunate of people, blessed by God to be Orthodox Christians and to be free Americans. We accept the responsibility to “make disciples of all nations” on these shores, as Christ required of us at His Ascension.

We take inspiration from the statement in 1922 of Ecumenical Patriarch Meletios, who said: “I have seen and understood how exalted the name of Orthodoxy could be…if more than two million Orthodox people were united into one church organization, an American Orthodox Church.”

We see that Orthodox Christian witness in America is weakened by our fragmentation into more than a dozen ethnic enclaves. We believe that Christ weeps at this disunity.

We call all Orthodox Christian people of America – clergy and laity – to come together in a single, unified Orthodox Church of America, under the historic rules and traditions of Orthodoxy.

We look to our hierarchs in the Assembly of Bishops – which was founded in 2009 for this very purpose – to lead us in this quest. We enjoin them – like Joseph of Arimathea – to take courage, and like us, be seen openly to be willing to make sacrifices for the sake of preserving and growing the Church of Christ for our children and for seekers of divine truth.

We declare ourselves to be Americans of proud descent from ancient shores, but no longer part of a church diaspora that puts ethnicity before Orthodox Christianity, lest our Church fades away as ethnic ties diminish over time.

We believe that the administration of our parishes and dioceses from Mother Churches on distant shores is uncanonical and unworkable. We are guided in this by clear Church canons and traditions: that there be only one Orthodox Christian bishop in any location; that foreign bishops have no authority outside their own territory; and that under the established Orthodox tradition of a great majority of places, when an Orthodox Christian national community is developed in a new territory, a single local church be established, uniting every believer in Orthodox doctrine.

We reassert the proper role of the laity in the governance of the Church. We understand this to mean that the laity defers to the clergy in respect and matters of doctrine. In return, we believe that Orthodox Christian tradition and historic practice require that the clergy respects the laity’s call for accountability, transparency, collegiality, adherence to process and the Canons of the Church, and ultimately then, unity.

In making this declaration, we remind ourselves of the historic courage and leadership of lay people in establishing and growing the single Christian Church, in defending the true belief of Orthodoxy during centuries of dispute, and in building new parishes around the world as immigration flourished.

We believe that foreign administration and indifference, and local ethnic fragmentation and disunity, have led, too often, to bad governance. This has contributed significantly to the decline of American parishes and dioceses, as succeeding generations see ethnic churches that are indifferent and unresponsive to their needs in a multicultural America. We believe we are a distinct and mature American Orthodox Christian community, that is ready to become a single, unified Orthodox Church of America.

We understand the apprehension that comes with the prospect of change. We believe that a unified, revitalized Orthodox Church of America would be a formidable spiritual and moral dynamo that would be a powerful force for good in the world, providing more support and vitality to the ancient Patriarchates and Mother Churches than divided, declining ethnic jurisdictions are providing.

We particularly envision a united Orthodox Christian Church of America to be a strengthened bulwark of support for the ancient Patriarchates that no longer have the internal governmental protection that the national Orthodox Churches have. We believe that this united American Church, wielding the potent voice of committed American citizens, will marshal an unprecedented level of material, moral, and political support for world Orthodoxy. A united, growing fellowship of Pan-Orthodox Archons and Guardians of the Faith of other jurisdictions, pledged to support and protect the ancient Patriarchates of Constantinople, Alexandria, Antioch, and Jerusalem, will cement the special relationship that binds children to their parents.

We believe that concerns over loss of traditions, customs, and language are also misplaced, for we strongly ascribe to the American ideal of “e pluribus, unum…out of many, one,” for the keeping of local practices, parish by parish. We believe that language and customs should and must be maintained as parishes choose. In this, the American multicultural experiment will continue, just as it has from its beginning. Early Pan-Orthodox efforts such as International Orthodox Christian Charities (IOCC) and the Orthodox Christian Mission Center (OCMC) will see their good work thrive in a united Church.

We also believe that the American model of the new United States, which needed over a decade from declaring independence to agreeing upon a governing constitution, is a useful model for our new Church governance. This new Church would neither obliterate our Orthodox identity nor ignore our traditions and precedents, but will instead adjust these God-inspired and time-honored tenets within the reality of a unified Orthodox Church of America. We believe we can take our time, grow in Christ, and get it right.

We, therefore, believe that our Assembly of Bishops should – as in historic practice – come together as a synod, elect its own presiding hierarch, proclaim the Church in North America to be an autocephalous, canonical church, and seek recognition of this autocephaly from the fifteen Autocephalous Orthodox Churches.

In this, we call upon the Holy Spirit, Who bathes the world in wisdom and good order, and Who knows no national, ethnic, or any other boundaries, to help make clear to all the earth our prayer: to help our Church prosper, thus to keep and bring Christ into the lives of all people. We pray that the Lord will guide these efforts, that they be imbued always with heartfelt humility, and that the new united Church for which we pray and which we work to create would be, at all times and in all ways, for the greater glory of God.

Orthodox Christian Laity board members authored this declaration in June 2022.

Click Here to read the LETTER SENT TO PATRIARCHS

CLICK HERE to view all signatures to date (updated daily)

Take note:
Check your email to confirm your email address immediately after
you sign the Declaration to complete the verification process.
You will receive an email from Civist ([email protected]) with the subject line:
“Petition: Please confirm your signature”
Otherwise, your signature will not be recorded. Thank you!