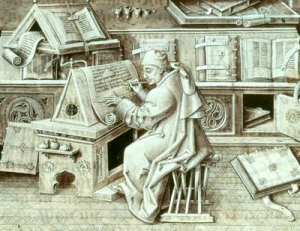 The Project for Orthodox Renewal

The Board of Directors of Orthodox Christian Laity (OCL) presents the Project for Orthodox Renewal, seven studies of key issues facing Orthodox Christians in America written for the good of the Church. This publication enables OCL to fulfill its educational mission of providing the “royal priesthood” of believers, clergy, hierarchy, and other interested Christians with information that fosters meaningful discussion on renewal of the Orthodox Church in the United States.

The American Orthodox Church is Holy, Catholic and Apostolic – It Must Now Be One
Published 2016. (#9)

The History and Future of the Female Diaconate
Compiled by Timi Loomos Freshman (assisted by Valerie Karras, Demetra Jacquet and Dr. Ellen Gvosdev) by request of Archbishop Spyridon. Published 1997. (#3)

The Theological Foundation of the Role of the Laity in the Church
Daniel J. Sahas, Ph.D. University of Waterloo Ontario, Canada. 1997. (#2) 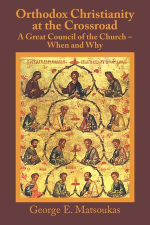 Orthodox Christianity At The Crossroad: A Great Council Of The Church ? When And Why The purpose of publishing the papers presented at the Twentieth Annual Meeting of Orthodox Christian Laity is to improve lay and clergy literacy on the conference topic of “The Need for a Great and Holy Council.” The papers are presented with the hope that the information will motivate the faithful to participate in the conciliar decision-making process that moves the Church forward on the issue of developing the council or another appropriate meeting. The forces, factors, and history that inhibit calling a council are presented in these papers. The hope of what can be accomplished when brothers work in synergy with each other and the Holy Spirit is also evident. 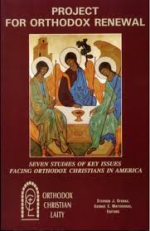 The Board of Directors of Orthodox Christian Laity (OCL) presents the Project for Orthodox Renewal, seven studies of key issues facing Orthodox Christians in America written for the good of the Church. This publication enables OCL to fulfill its educational mission of providing the “royal priesthood” of believers, clergy, hierarchy, and other interested Christians with information that fosters meaningful discussion on renewal of the Orthodox Church in the United States. Published 1993.

Order at Amazon, read online or download a pdf file. 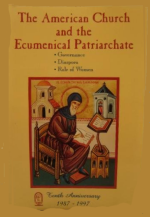 The American Church and the Ecumenical Patriarchate: Governance, Diaspora, Role of Women

Books by OCL Board Members 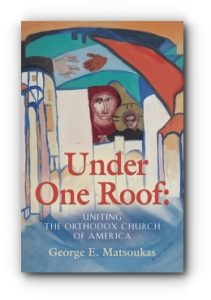 Under One Roof: Uniting the Orthodox Church of America

This is the second collection of essays, compiled from opinion columns written during the period 2012-2020, when George Matsoukas served as executive director of Orthodox Christian Laity (OCL). The first collection, “A Church in Captivity: The Greek Orthodox Church of America,” is also a collection of opinion columns, this one written during the period 1990-2007. This series of observational essays can be considered a first cut in putting together the history of Orthodoxy in America during this 30-year period. These essays also tell the OCL story and provide an insight into how the organization functions.

The essays are written from the point of view of how societal events and concerned faithful were energized to advance the mission of Orthodox Christian Laity. OCL is a pan-Orthodox educational and advocacy ministry formed in 1987 to:

•advocate for the restoration and strengthening of the historic role of the laity in the conciliar governance of the Orthodox Church in the United States.

•support the spiritual renewal and regeneration of the Orthodox Christian Church in the United States in its Apostolic Mission.

•advocate for and promote transparency and accountability in the governance of the Orthodox Church in the United States.

•advocate for and champion the establishment of an administratively and canonically-unified, self-governing autocephalous Orthodox Christian Church in the United States.

Matsoukas’ musings in his first volume, “A Church in Captivity,” reflect the deep political changes transpiring after the “fall” of Communism in the captive “Orthodox” nations, and then in what manner those “national” churches began to respond to their “diasporas,” those still existing multiple jurisdictions in The United States.

This weighing of the ongoing strain between those who continue to uphold that “a unity through a simple Eucharistic oneness is sufficient” and those who insist on a “canonically unified Church administration” is the stuff of volume two, “Under One Roof: Uniting the Orthodox Church of America.” It is the fruit of the author’s essays of the past 13 years.

Matsoukas’ objective is to call us to be faithful to the Canonical Tradition of the Church so that it can bring forth the fullest witness of Orthodoxy through uniting all Orthodox in The United States. Considering the low percentage of Orthodox believers vis-à-vis others in this nation, the call to strength in unity makes practical sense as well. There is strength in numbers.

Matsoukas reminds us that although we seem to be under one Eucharistic roof, he calls for a oneness which must not be as a loose federation of jurisdictions dependent on Synods abroad, but an authentic unity in itself total, canonical, autocephalous, as other local churches each became.

The reader is grateful for the wide coverage given us of thirteen years of new Orthodox witness in the six divisions (Orthodox Christian Laity Story, Promoting Unity, Holy and Great Council, Assembly of Bishops, Greek Orthodox Archdiocese, Renewal) of this new volume. The reader can take each article, one by one, and enjoy the author’s convincing presentations, and then sit back and enjoy arguing with him! Can an assembly of jurisdictions occasionally gathered at an altar, receiving from one cup and one diskos, be the fullness of Orthodox witness under one roof? The author’s answer is an emphatic, “No!” 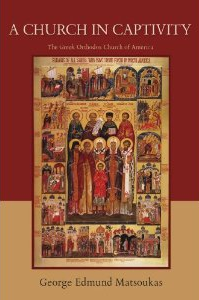 A Church in Captivity: The Greek Orthodox Church of America

It is a disconcerting fact that decisions for Orthodox Christians living in North America are currently dictated by interests of foreign governments and patriarchates, all which contribute to spiritual indifference among the faithful. This collection of essays explores the loss of autonomy and unification within the Greek Orthodox Archdiocese and offers ways to create an all-encompassing church that respects cultures and philosophies.George Matsoukas, Executive Director of Orthodox Christian Laity in West Palm Beach, Florida and an active member of his local parish, diocese, and archdiocese, chronologically presents personal essays that respond to regression in the life of the church during a seven-year period. He encourages constructive change through effective communication and a partnership between the church and the laity, ultimately resulting in a church that is able to meet the spiritual needs of all its members. 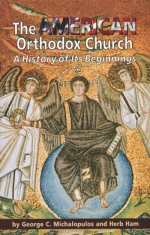 American Orthodox Church: A History of Its Beginnings 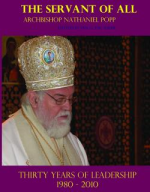 The Servant of All

His Eminence Archbishop Nathaniel Popp was elected to the Holy Episcopacy in October 1980, by the Congress of the Romanian Orthodox Episcopate of America and the Holy Synod of the Orthodox Church in America. In thirty years of his archpastorate, the number of parishes and clergy in his diocese tripled, communism fell, and the dream of Orthodox Christian unity in North America acquired new urgency. Here are the thoughts, exhortations and inspirations of the man chosed by God to shepherd the Romanian Orthodox Episcopate of America through these challenging and promising times. 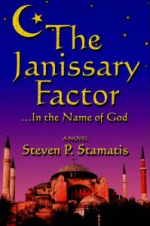 The Janissary Factor: …In the Name of God

A seminary graduate at the crossroads of his calling, and full of memories and personalities who shaped him, Andy Theofanis faces a crisis in his faith. He revisits the ethnic coffee house (cafenio) of his childhood, hoping to connect with mentors from his past to help him settle his indecision about the priesthood. This personal struggle is triggered by the chaotic state of his church in America. Confusing administrative changes imposed by the faraway Patriarchate in Istanbul, Turkey, split the U.S. Greek Orthodox and threaten the future of his established church. Andy’s determination to find a rational explanation for the moves that turn back the clock for the church in America leads him to Istanbul. There, he stumbles upon an unthinkable plot 200 years in the making and about to be unleashed. The drama unfolds against the current global backdrop of Islamic terrorism and the enduring historic enmity between Turkey and Greece. Add to this the Greek world’s insistence that their Holy See remain in hostile Islamic territory, and a condition develops threatening the survival of an ancient faith-possibly Christendom itself. 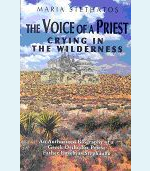 The Voice of a Priest Crying in the Wilderness

This is the story of a Greek Orthodox priest’s passionate search for spiritual renewal, and how God met that need both for himself pesonally and then generally for the Church at large. The journey of faith that Father Eusebius Stephanou embarked on proved in effect to be the history of renewal in the Orthodox Church of North America since 1968. The reader will find in this book a gripping account of the controversial events that marked the turbulent course of the renewal outreach he initiated.

A Manual on the Basic Principles of Orthodox Renewal 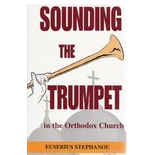 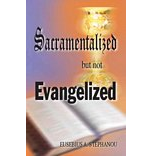 Desolation and Restoration in the Orthodox Church 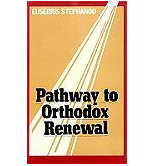 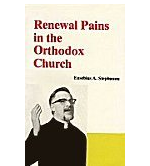 Renewal Pains in the Orthodox Church 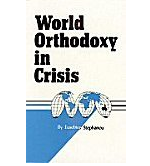