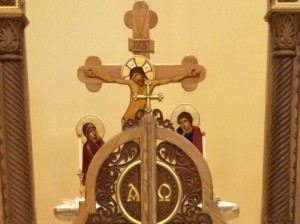 Another case of sexual misconduct. Another Orthodox priest.  Another scandal.  This storyline seems to repeat every few years.  How can we take action to stop this behavior, long before it explodes into national scandal?

Clergy sexual misconduct is deeply wrong and intensely harmful, but it’s hardly a rare occurrence.  Tragically, it happens somewhat frequently in faith communities.  Some report that 1 out of every 5 pastors (of all Christian groups) have misused their power and position to sexually abuse or sexually harass.

While we members of a local church will rightfully be shocked that our respected, beloved parish priest violated his service to Christ, we should no longer be surprised that some pastor will behave this way sometimes.  The fact is that clergy sexual misconduct happens – in our parishes – too often.  Facing up to this painful reality should motivate us to stop it – before more lives are damaged.

It’s time to take tangible steps to address this recurring problem.  The Church is not helpless in the face of human passions or modern temptations.  We can do better.  Rather than reacting to tragedies after they happen, let’s nip them in the bud, changing our paradigm from reaction to prevention.  Preventing clergy sexual misconduct is not easy or foolproof, but there are straightforward actions we can take that will reduce greatly its frequency.

Sexual offenses are not mysterious, random events, but instead follow predictable patterns.  Although we speak of “falling into sin,” these are not involuntary happenings.  For example, sexual misconduct is always preceded by inappropriate behaviors and interactions.  Before a sexual offense occurs, the pastor will have crossed personal boundaries which he should not have crossed.

A neutral observer could predict whether one clergyman is more than likely than another to commit sexual misconduct, just by paying attention to any violations of personal boundaries.  The simplest way to spot a pastor who is a potential offender is to look for repeated red-flag behaviors in interactions with women or children.  There will always be multiple violations of personal boundaries before anything sexual happens.  This is a certainty.

In several well-publicized cases of sexual misconduct by priests in our archdiocese, boundary violations were present for years before public scandal erupted, according to published interviews with involved persons, legal documents, and member comments.  George Passias (defrocked 2015) had long spent too much time alone with a woman not his wife, allowing an unhealthy relationship to develop.  Fr. Nicholas Graff (suspended 2007), an unmarried priest, was living together with a teenaged boy, who identified as gay, for years before resigning from a Florida parish and being sued by the boy’s family.  The late Nicholas Katinas (defrocked 2007) had been accused by parish leaders in Illinois of sexual abuse of boys on several occasions, before being transferred to lead a parish for 28 years in Texas, where he abused others.

In each of these situations, lay persons reported the improper conduct to church leaders.  There was an opportunity to intervene responsibly, long before there was concrete evidence that sexual misconduct occurred.   It was not necessary to wait for video evidence or lawsuit depositions, because we knew already that something unhealthy was occurring.   And yet we failed to respond effectively and the violations were not stopped.  Persons, parishes and our credibility were damaged as a result.  (There was an internal investigation of Fr. Graff and some questioning of George Passias, but no formative action was taken.  It should be noted that intervention is always challenging, even for a bishop, when a prominent priest is accused.)

We want church leaders to do what’s necessary to bring healing and justice, trusting the people in the pews to help enforce good behavioral guidelines to ensure healthy Christian communities.  Let us work to preemptively stop inappropriate behavior, as soon as it is recognized, before it escalates into sexual misconduct, before vulnerable people are hurt.

Pastors need to be uncompromisingly honest with themselves and seek accountability from respected peers, since research has shown that all clergy have difficulties maintaining professional boundaries.  When a priest has gone over the edge of appropriate behavior, he needs to be held accountable.  Whether the bishop or another priest or a friend, someone needs to intervene, starting with, “I’m concerned about you. Do you need help?  Are your relationships healthy?”  In the least serious cases, an accountability and rehabilitation plan could be put into place.  (Of course, government authorities should be contacted immediately whenever a sex abuse crime is suspected.)

Clergy must strive to meet the highest standards, fostering genuine and healthy interactions with church members.  Hippocrates gave the healing professions a standard of ethics, “First, do no harm;” but he expanded this guidance further by saying, “Whatever houses I may visit I will come for the benefit of the sick, remaining free of all intentional injustice, of all mischief, and in particular of all sexual relations….”

When an Orthodox priest is putting on vestments for the Divine Liturgy, he quotes from the Psalms, “Your priests shall be clothed in righteousness; your people shall rejoice with joy.”  Laity have the right to trust that their pastors will fulfill that responsibility.

Gregory Waynick has served for 16 years as a priest of the Metropolis of Atlanta, Greek Orthodox Archdiocese of America. He was a member of the Archdiocese Advisory Board for Clergy Sexual Misconduct for 3 years, and writes occasionally at www.jeffreywaynick.com.