[ditty_news_ticker id="27897"] TO WHOM SHOULD THE ORTHODOX DIASPORA ANSWER?—DISCUSSION AT CRETE COUNCIL - Orthodox Christian Laity 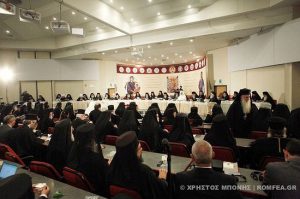 The problem of the Church diaspora will be discussed with great difficulty at the Crete Synaxis due to the absence of the delegations of the Russian and Antiochian Orthodox Churches. Representatives of the Serbian Orthodox Church noted during the discussion that in the absence of Local Churches “with great dispersions” it is impossible to make decisions which affect their interests.

In his presentation Archbishop Anastasios of Albania, for his part, emphasized: “We should be very careful about what we decide.” As Romfea reports, it was decided at the Council to more thoroughly examine the protocol of the 2009 Chambesy meeting in order to more closely study the problem.

The news agency stressed that there is a sharp conflict between the Constantinople and Antiochian Patriarchates, due to the presence in France, Germany and America of bishops of both jurisdictions with the same titles. According to Romfea, Patriarch Bartholomew of Constantinople, who in general wants there to be no such jurisdictions in the diaspora but his own, recently while speaking in the capital of Argentina in the presence of the local metropolitan of the Antiochian Patriarchate with obvious irritation referred to him as the bishop “of Buenos Aires.”

Note that in 2009 at the pre-conciliar meeting in Chambesy it was resolved to create consultative bodies in the form of assemblies of the Orthodox bishops of every jurisdiction bearing responsibility in one or another region. Then it was decided that these organs, under the chairmanship of the local bishop of Constantinople’s jurisdiction, would have an exclusively consultative character.

The Orthodox Church diaspora has spread in the context of mass migrations of the twentieth century to territories not within the jurisdiction of any Local Orthodox Church. Bishops and clergy of various jurisdictions have appeared in these countries, giving rise to a specific situation in which more than one Orthodox bishop, belonging to different Local Churches, resides in one and the same city.