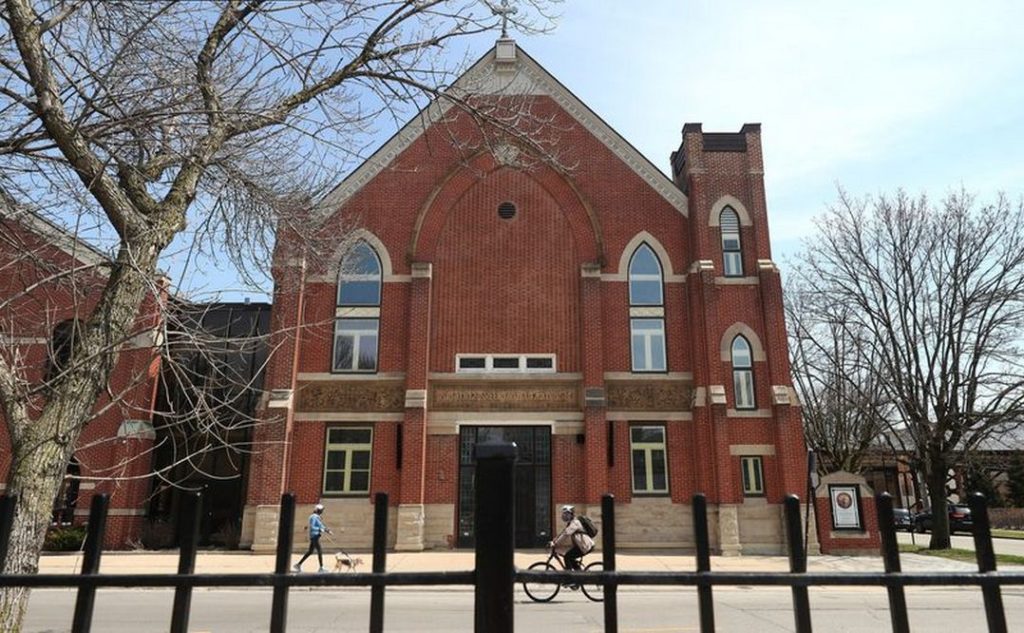 A woman walks past St. George Greek Orthodox Church in the 2700 block of North Sheffield Avenue on April 11, 2020, in Chicago. Eighteen people connected to the church are sick with COVID-19, and four people have died. (John J. Kim / Chicago Tribune)

When a parishioner of St. George Greek Orthodox Church in Lakeview received permission to be at the side of his parent who was seriously ill after contracting COVID-19, the Rev. Chrysanthos Kerkeres was able to say a prayer over the phone.

The son donned full protective gear, called up the priest on FaceTime and showed his parent the phone. Kerkeres gave a general blessing over the parishioner, who remains hospitalized.

The parishioner was one of 18 people with connections to the North Side church who have fallen ill with the virus, four of whom have died, leaving the priests to find ways to minister to the community virtually, Kerkeres said.

“It’s incredibly difficult,” he said. “We’re so used to most of our time being spent ministering to people face to face.”

The church was closed to the public on March 13, and the illnesses began cropping up in the past two weeks, so Kerkeres doesn’t believe the cases are associated with events at the church. He said most of the 18 people who became sick are from three different households who likely were exposed by other family members.

Still, the church, with a congregation of around 450 people, finds itself in the difficult position of having to hold four funerals in quick succession for current and former church members who have died. Three of the deceased lived in the Chicago area, and a fourth died in New York but wanted the funeral to be held in Chicago.

Three of the funerals are scheduled for this week, and one already happened, Kerkeres said. About half of the 18 who are sick attended church regularly, and the other half were more loosely connected to the church, he said.

Priests have spent time on the phone and using video chat services to pray with the sick and offer comfort, particularly to those who have lost family members without being able to be by their side.

“We reach out to people quarantined in homes just to check in,” Kerkeres said. “People are grieving so differently than what they’re used to. It’s almost like grieving twice when they can’t be with family members.”

With the help of volunteers, the priests have also been delivering prepared food that had been donated to the doorsteps of high-risk parishioners. They have also been placing Instacart orders for older parishioners who call in with grocery lists.

“People are really coming together,” he said.