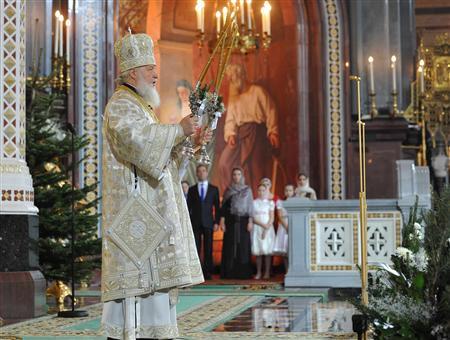 The ban retaliates for U.S. legislation designed to punish Russian human rights violators which Putin said is poisoning relations. Critics of Russia’s legislation say Putin has made the welfare of children trapped in a troubled orphanage system hostage to political maneuvering, dimming their chances of finding loving homes or adequate medical care.

Orthodox Patriarch Kirill, a strong supporter of Putin, paid special attention to the issue in a Christmas message, lending support to the president’s promises that Russia will take care of its own.

“It is very important for our people to adopt orphans into their families, with joy and a special sense of gratitude to God, giving them not only shelter and an upbringing but also giving them their love,” he said.

Opponents of the new law are planning a protest rally against it on January 13 and have already won backing from some artists and the liberal party Yabloko.

The number of adoptions by Russian families is modest, with some 7,400 in 2011 compared with 3,400 of Russian children by families abroad – nearly 1,000 of those by Americans.

More than 650,000 children are considered orphans in Russia, including those rejected by their living parents or taken from dysfunctional homes. Of that total, 110,000 lived in state institutions in 2011, according to government figures.

In signing the legislation, Putin echoed Russian lawmaker allegations that American parents who have been accused of abusing their adopted Russian-born children have been treated too leniently by U.S. courts and law enforcement.

He also signed a decree ordering improvements in the care for orphaned Russian children and appealed to patriotism, suggesting that Russians have an obligation to care for the country’s disadvantaged children.

Kirill added a religious element to that message, saying: “The Lord tells his followers that if they want to reach the Kingdom of God they must … share their opportunities with the needy – primarily invalids, the elderly, and children.”

“‘Let the children come to me, and do not hinder them,’ says the Lord. These words from him should … make us all realize how important children are in the eyes of God,” Kirill said.

“And as we celebrate Christmas I would like to appeal to everyone with a request: If you can take this important step in life aimed at adopting children, supporting orphans, take this step. There should be no orphans in our country.”

The Russian Orthodox Church uses the Julian calendar and celebrates Christmas on January 7.

Kirill repeatedly drew criticism last year over allegations of a lavish lifestyle and excessively close ties with Putin. The Patriarch once likened the 13-year rule over Russia by the former KGB spy to a “miracle of God”.

More than three-quarters of Russians consider themselves Russian Orthodox, but far fewer attend church regularly despite a resurgence of religion since the demise of the communist Soviet Union two decades ago.

Putin, 60, has cultivated close ties with the Orthodox Church since he first rose to power and has leaned more on it for support since starting his third term as president in May following a wave of protests against his rule.

Kirill’s midnight service at Moscow’s Christ the Saviour Cathedral was aired live on state television, which also showed Putin attending a service in the southern city of Sochi.