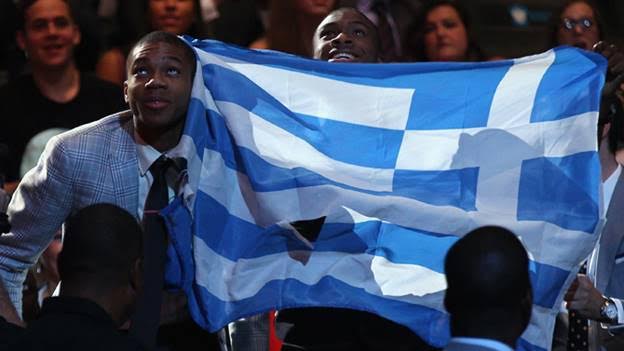 Originally published in our Sounding Blog in January 2017, the OCN is again sharing this post as Giannis Antetokounmpo of the NBA’s Milwaukee Bucks is making news again.  For more on this story, check out this video from CBS News 60 Minutes.

There are times I find it difficult to attend Church.

As a Greek Orthodox parishioner and father of a multi-cultural family, I hear the words that are whispered.

You’re not Greek, are you?

The Church is for Greek people first.

There are two types of people, Greeks and those who want to be Greek.

Statements like these along with the misuse of words like omogenia and xeni only make one weep. Even more heartbreaking is the reality that far too many leaders are silent in the face of such behavior allowing it to continue time and again.

This is evident in the Greek community’s newest and most noted celebrity, Giannis Antetokounmpo. Giannis Antetokounmpo plays professional basketball for the Milwaukee Bucks of the NBA. The son of Nigerian parents who immigrated to Greece, Giannis is considered a role model to Greeks around the world who have nicknamed him “The Greek Freak” for his incredible basketball skills. Some have even speculated that Antetokounmpo has the potential to take his place among such basketball legends as Kareem Abdul-Jabbar and Larry Bird.

Recently, video appeared of Antetokounmpo greeting adoring Greek fans outside Madison Square Garden in New York. What is notable is this young man’s humility as he speaks with his fellow Greeks in the language they share. There was also a moment of moral clarity when Antetokounmpo declined to sign a Greek Flag saying he would not desecrate the symbol of his homeland with his autograph.

This is the new face of being Greek: A son of immigrants and Orthodox Christian proudly embracing Hellenic culture and serving as a messenger of its virtues for all to see. The truth about being Greek is that it is not about the color of one’s skin, the place of one’s birth or the genetics of one’s parents. It’s about the choices one makes and the human values one lives every day.

So, what does Giannis Antetokounmpo have to do with being Greek Orthodox today?

The Church is changing. Greek Orthodoxy is undergoing a seismic demographic shift. Baptisms, Chrismations and Weddings are at recorded lows. The Greek Orthodox Family is disappearing faster than ever as 85% of marriages that take place in Greek Orthodox parishes in America include one spouse who chooses not to be Orthodox. Parishes that were once large and prosperous now struggle to make ends meet as less people attend services, and those that do give smaller amounts of their income to the Church.

The Church as a form of nostalgia has failed.

Fr. John Bakas teaches us all of a valuable lesson when he declares “You Don’t Have to Be Greek to Be a Hellene.” He also reminds us that “…we can all be Hellenes by emphasizing the Hellenic roots, the Hellenic philosophy, and the Hellenic Character of Christianity…that is what we must do, and we will attract others…” Now more than ever, the idea of being Greek as a form of nostalgia has to be set aside.

Greeks around the world are better off for welcoming Giannis Antetokounmpo into the Hellenic Family. His public presence is a constant reminder of what it means to be Greek. The Church should learn from this example and open wide its doors to the many people of diverse backgrounds who live among us today. The word “Greek” in Greek Orthodox is an inclusive term, not an exclusive one. There is no reason that we should not have a Greek Orthodox Church that returns to its Tradition and boldly embraces evangelism and diversity as a core value.

After all, the history of Church shows that it is better to build a larger table than a taller fence.

ABOUT THE ORTHODOX CHRISTIAN NETWORK

Orthodox Christian Network (OCN) is a 501(c)3 and an official agency of the Assembly of Canonical Bishops of the United States of America . It is a recognized leader in the Orthodox Media field and has sustained consistent growth over twenty-two years. We have worked to create a community for both believers and non believers alike by sharing the timeless faith of Orthodoxy with the contemporary world through modern media. We are on a mission to inspire Orthodox Christians Worldwide. Click to signup to receive weekly newsletter.

Join us in our Media Ministry Missions! Help us bring the Orthodox Faith to the fingertips of Orthodox Christians worldwide! Your gift today will helps us produce and provide unlimited access to Orthodox faith-inspiring programming, services and community. Don’t wait. Share the Love of Orthodoxy Today!