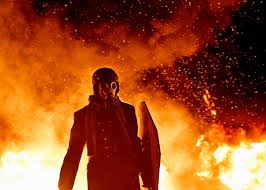 As many as 100 people have reportedly died in Thursday’s clashes.

Listen to this BosNewsLife News report via Vatican Radio:

KYIV, UKRAINE (BosNewsLife)– The influential Ukrainian Orthodox Church (Kyiv Patriarchate) says it has removed prayers for the government from its liturgy, after as many as 100 people died when a truce broke down between security forces and anti-government protesters.Thursday’s clashes came while European Union ministers attempted to talk with the embattled president Viktor Yanukovich.

Central Kyiv turned into a war zone. Demonstrators were running for cover as snipers and other security forces attacked them. Protesters, some of them wearing helmets, rushed to carry away what appeared to be dead bodies.

Many died shortly after a short-lived truce crumbled Thursday when gunfire first erupted at Independence Square, the centre of anti-government protests.

Earlier, furious protesters tried to storm the security services building in the western city Khmelnitsky. Soon more bloodshed unfolded.  There was panic as a woman was shot. She was lying motionless, heavily bleeding, in front of the building, before being rushed to hospital.

Amid the chaos,  the Ukrainian Orthodox Church leadership said prayers for the current government would no longer be included in the liturgy, an unprecedented move.

Instead the denomination’s ruling body, known as the Holy Synod, advised believers to ask God to protect Ukraine and its people, and to pray and the many victims.

Earlier, while thick black smoke rose from the barricades, the Major Archbishop of the Ukrainian Greek Catholic Church (UGCC) Sviatoslav Shevchuk, appealed for an end to violence.

“With great regret I should say that appeals of churches to prevent the bloodshed and a peaceful settlement of the conflict has not been heard,” he said in a statement monitored by BosNewsLife.  “In the name of God I condemn violence and disregard of human rights and the will of the people,” he added. “I would like to emphasize that the one who has the power, bears full responsibility for what is happening in the country.”

His church has been targeted by authorities, as its priests continue to pray with protesters, despite often dangerous circumstances.

The international community also expressed shock about the fighting.

On Thursday, February 20, the German, French and Polish Foreign Ministers met Ukraine’s embattled president Viktor Yanukovich and were to meet the opposition as part of efforts to end the crisis.

Russian media said Russia’s President Vladimir Putin also planned to send an envoy to mediate between Ukraine’s leader and the opposition, underscoring a geopolitical battle for the future of this former Soviet nation.

Amid the tensions, European Union ministers are considering sanctions, including possible steps such as asset and travel bans.

“President Yanukovich has to decide whether he wants to protect his people, or further mayhem,” he said.

Russian Foreign Minister Sergei Lavrov has told Russian media that threats of sanctions are blackmail and accused the EU of arriving in Kiev on uninvited missions.

German Chancellor Angela Merkel spoken with Russian President Vladimir Putin over the situation in Ukraine, amid some concerns that Russian forces may intervene.