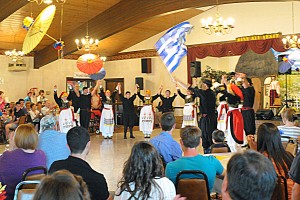 After the soccer tournament, Vespers were held at The Presentation of Our Lord Orthodox Church in Akron. We were blessed to have five clergy from far and wide serve Vespers together and to have Jonny Braun, grandson of Fr. Peter Gillquist, conduct the vesper choir. A mixture of melodies representative of the different jurisdictions, including byzantine chant, filled the church and hearts of all who attended.

Each and every performance group did an excellent job representing their different heritages and traditions. Harmonia Band, led by Walt Mahovolich of Cleveland, Ohio, provided Greek, Romanian, Macedonian, Russian, and Serbian dancing music, for everyone, into the night. Also, a new addition to this year’s event, dance groups taught participants, from all jurisdictions, unique steps to their Greek, Romanian, Arabic, Macedonian and other dances! We called it dance instruction and typically a dance group ended their performance and then the dance floor filled with youth and young adults wanting to learn some of the steps the dance group had just performed. The dance coordinator stood in the center of the dance floor and broke down a couple dances into easy steps for everyone to learn. It was wonderful to see the members of different dance groups teach each other their favorite steps and learn new ones after their formal performances had ended and the community dancing had begun. Saturday night ended with the singing of “Rejoice Oh Unwedded Bride”, and other camp favorites by the Pan Orthodox Choir.

Sunday morning started with Orthros and the weekend closed with an Awards Lunch after Divine Liturgy at The Presentation of Our Lord Orthodox Church. Parish members and participants of the Pan Orthodox Convention broke bread together at the outdoor barbeque style Awards Lunch. The food was excellent, the fellowship was better, and our spirits were renewed from the atmosphere of unconditional Orthodox love.

The Pan Orthodox United committee is already making plans for the 3rd Annual Pan Orthodox Convention, from May 29 through May 31, 2015. Visit their website at www.panorthodoxunited.org.