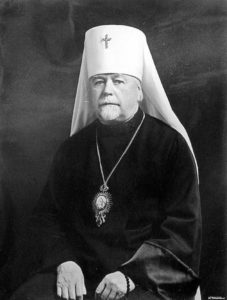 March 18, 2021 marks the 40th anniversary of the repose in 1981 of His Beatitude Metropolitan Ireney (Bekish), the first Primate of the Autocephalous Orthodox Church in America (OCA).  When Metropolitan Ireney signed the agreement with the Church of Russia on autocephaly for the Russian Orthodox Greek Catholic Church of America (popularly known as the Metropolia) and the Tomos of Autocephaly was granted by the Patriarch of Moscow in the spring of 1970, he had already served as Primate of the Metropolia for nearly five years.  He would continue his Primatial service within the Autocephalous Orthodox Church in America for seven years, until his retirement in 1977.  He then lived quietly and humbly in retirement until his repose on March 18, 1981.

To commemorate this anniversary, the Office of History and Archives published a new, expanded biography of Metropolitan Ireney.

An enlarged photo gallery documenting his life can be found here.

Two key documents issued by Metropolitan Ireney during his Primacy of the American Church:

Remembrances of Metropolitan Ireney written for the 20th anniversary of his repose, previously published in the 2001 OCA Sourcebook & Church Directory, are now posted online for the first time.

May the memory of Metropolitan Ireney be eternal!