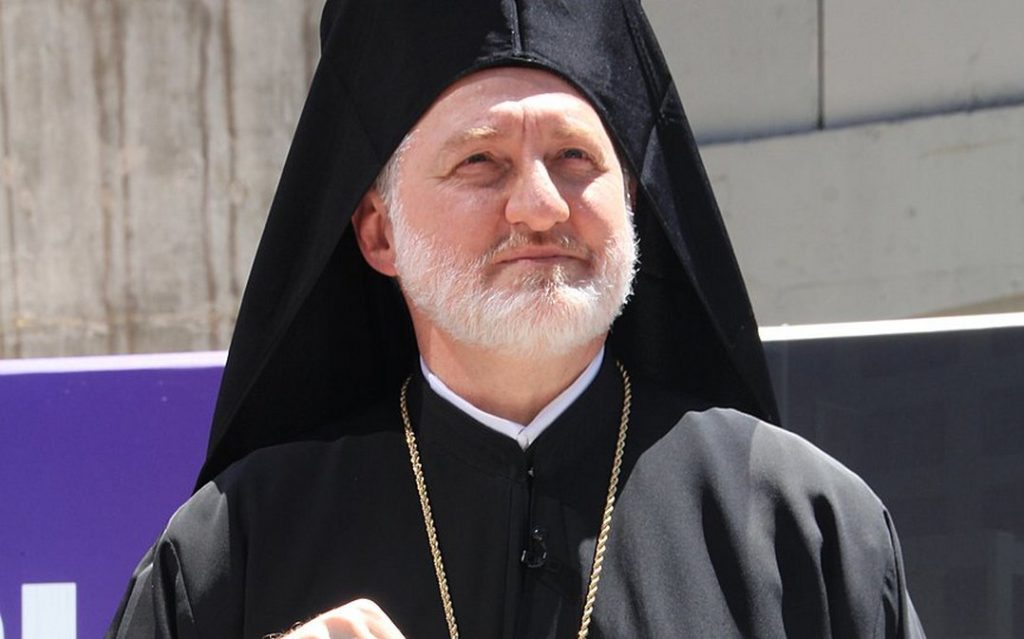 BOSTON – The problem of the clergy’s pension made Archbishop Elpidophoros lose sleep at night as he revealed in an interview with The National Herald just hours before he departed for Constantinople to meet with His All-Holiness Ecumenical Patriarch Bartholomew and to attend the enthronement of His Eminence Metropolitan Geron Emmanuel of Chalcedon.

The Archbishop said that “the explosive problem of the clergy pension plan did not allow me to sleep during the first months of my ministry in America. I knew that the funding deficit of about $65 million had constantly grown and ultimately would lead one day to the plan’s collapse.”

He spoke openly about the failure of the previous administration of the Archdiocese without using any names, that, “I cannot blame the clergymen for their concern and hesitation since this issue is so vital to them, to their presvyteres, and to their children, who — in regard to the pension — have until now been treated with so much indifference and non-transparency.”

The Archbishop explained that “I would like to emphasize that we are not freezing nor replacing the existing Pension Plan. Following the recommendations of Mercer, one of the leading consulting firms on investment and pension topics, we have prepared a funding plan, as we had committed ourselves at the Clergy-Laity Congress this past September. By implementing this strategy, we will save the Pension Plan.”

TNH: Your Eminence, what are the reasons for your travels to Constantinople?

Archbishop Elpidophoros: As is the case for every Orthodox Christian, and indeed every Greek — myself included — every visit to Constantinople is a source of inspiration, a renewal of spiritual fortitude, a rebaptism in the sacred and holy places of our faith, and a blessing from the first Hierarch of worldwide Orthodoxy, our Ecumenical Patriarch Bartholomew. This is especially true for me, as Constantinople is my homeland and my beloved birthplace. Therefore, I try to make this pilgrimage at least twice a year. This time, in addition to the aforementioned reasons, I received His All-Holiness’ blessing to participate in the joy of the enthronement of my much beloved and venerable brother in the Lord Metropolitan Emmanuel to the Elder and historic Metropolis of Chalcedon on March 20.

TNH: What are your thoughts on the election of Metropolitan Emmanuel to the Elder Metropolis of Chalcedon?

Archbishop Elpidophoros: Metropolitan Emmanuel is among the distinguished Hierarchs of the Ecumenical Throne and of all the positions which he has served until now (Director of the Office of the Orthodox Church to the European Union, Metropolitan of France). He has proven that he justly earned the trust and pleasure of the Ecumenical Patriarch who proposed to the Holy and Sacred Synod for him to be elected as the Elder Metropolitan of Chalcedon. We personally maintain strong bonds of friendship that have been forged during our admirable and successful cooperation in the very delicate and important ecclesiastical missions that the Patriarch entrusts to us from time to time. Moreover, Metropolitan Emmanuel of Chalcedon is not unknown in America since he maintains many bonds of friendship and enjoys the esteem and respect of both the clergy and the laity.

TNH: What does this mean from an ecclesiastical point of view?

Archbishop Elpidophoros: You have already succeeded in perceiving and successfully formulating the ecclesiastical significance of this development, my dear Mr. Kalmoukos, in your recent relevant articles. One of the primary administrative and leadership virtues of our Patriarch is to perceive needs and demands of the times and to not hesitate in making pastoral changes whenever and however necessary, for the good of the Church. This is not the first time that our Patriarch dares to turn the page in the history of the Ecumenical Patriarchate and to make decisions that elevate the Mother Church, intelligently and flexibly solving the Gordian knots which have been imposed on her from time to time against her will. The Patriarch is not pulled along by the current of history. He traces history and sketches it. This is what this election means.

TNH: What are some of the topics of the Archdiocese of America that you intend to discuss with Ecumenical Patriarch Bartholomew?

Archbishop Elpidophoros: With every trip to Constantinople, as you must know, I go with “my luggage overflowing.” Not with luggage filled with items — since I will be only staying a few days — but with news, information and reports which I owe to our Patriarch, just as every Hierarch of the Throne does. Primarily, I have good news to tell him – specifically, the three major issues that existed in our Holy Archdiocese when I assumed the responsibility for her management: a) St. Nicholas at Ground Zero, b) the difficulties of the Holy Cross Theological School and, c) the large deficit in the Pension Plan of the Clergy.

TNH: Can you be more specific? For St. Nicholas, what are you saying?

Archbishop Elpidophoros: The good news is that, thanks to the tireless efforts of the Friends of St. Nicholas, along with the generous donations of our faithful, our grand benefactors, our parishes, Leadership 100, FAITH, and thanks to the incredible efforts and productivity of the Vicar General of our Archdiocese, Protopresbyter of the Ecumenical Throne Alexander Karloutsos, we have already resumed construction and are in a place to announce that this year, our Patriarch will come to perform the Thyranoixia of this jewel which is the pride of Orthodoxy and Hellenism in America.

TNH: Tell us honestly, Your Eminence, were you expecting the decision of the Accrediting Authority for the reaffirmation of Academic Accreditation of the School to be issued so soon or was it a surprise to you?

Archbishop Elpidophoros: One of the elements that make some people in other countries across the globe jealous of America is that, here, whoever works hard, is rewarded. Certainly, we worked very hard to reach this much sought-after day where the Accrediting Agency for our beloved School once again provided accreditation for our degree programs. We did not expect, however, that it would be this quick. We had been hoping that this issue of accreditation would have reached a resolution by the beginning of the academic year this coming September so that we might be able to present this exceptional news as another gift to our Church and to our Patriarch. Here, I must acknowledge the primary and leading role in this success played by Mr. George Cantonis, President of the Theological School and the College and Archon of the Ecumenical Throne. This distinguished individual remained far away from his family, his work, his friends and relatives, and indeed, during the entire time of the pandemic, was literally closed-in at the School living as a worldly monastic, focusing exclusively and only on its reorganization and, in fact, refusing any salary. In other words, working pro bono. How can one not be moved that from our omogeneia here in America are found people that have the ethos and a willingness to sacrifice and offer of themselves? Thank you that, in the pages of the National Herald, you have highlighted the example of Mr. Cantonis.

TNH: Could you enlighten our readers on the progress of the solution of the third issue you mentioned, the deficit of the Pension Plan of the Clergy? What will you tell the Patriarch?

This issue, admittedly, has tired me very much, because I did not expect that it would be so complex. I believed that in an historic Archdiocese they would have resolved long ago such issues of the Pension Plan, life insurance, and healthcare. I understood later that the matter is neither solely economic, nor purely an issue of governance. However, what I found most difficult are the interpersonal relationships that have been deeply damaged along with the accumulated mistrust of the clergy and the administration of our Archdiocese. These are, as you can understand, problems that need time to be repaired. I cannot blame the clergymen for their concern and hesitation since this issue is so vital to them, to their presvyteres, and to their children, who — in regard to the pension — have until now been treated with so much indifference and non-transparency.

The explosive problem of the clergy pension plan did not allow me to sleep during the first months of my ministry in America. I knew that the funding deficit of about $65 million had constantly grown and ultimately would lead one day to the Plan’s collapse, making it incapable of paying the pensions of our retired clergy, leaving them exposed in their old age after so many years of dedicated service – even if this might not happen for some decades, when I am no longer alive. My co-workers and I have devoted many hours to meetings, teleconferences, and conversations with the clergy and experts on the topics concerning the Pension Plan and employee insurance.

Today, I am in the grateful position to announce that a funding solution has been found for the Pension Plan. It is a solution that will not heavily burden the parishes, the priests themselves, or the Archdiocese. I would like to emphasize that we are not freezing, nor replacing the existing Pension Plan. Following the recommendations of Mercer, one of the leading consulting firms on investment and pension topics, we have prepared a funding plan, as we had committed ourselves at the Clergy-Laity Congress this past September. By implementing this strategy, we will save the Pension Plan.

TNH: How do you feel about the Greek-American Community?

Archbishop Elpidophoros: Allow me to express my gratitude to the people of God, the faithful men and women of our Holy Archdiocese, because they inspire me and give me strength with their faith in God, their devotion to the sanctuaries and holy places of our Church, and their offerings to keep our churches, our schools, and our ministries and programs alive throughout the American nation. May God bless them, protect their families, ensure their health, and multiply the success of their works. This is the most valuable gift I would place upon the omophorion of our Patriarch.