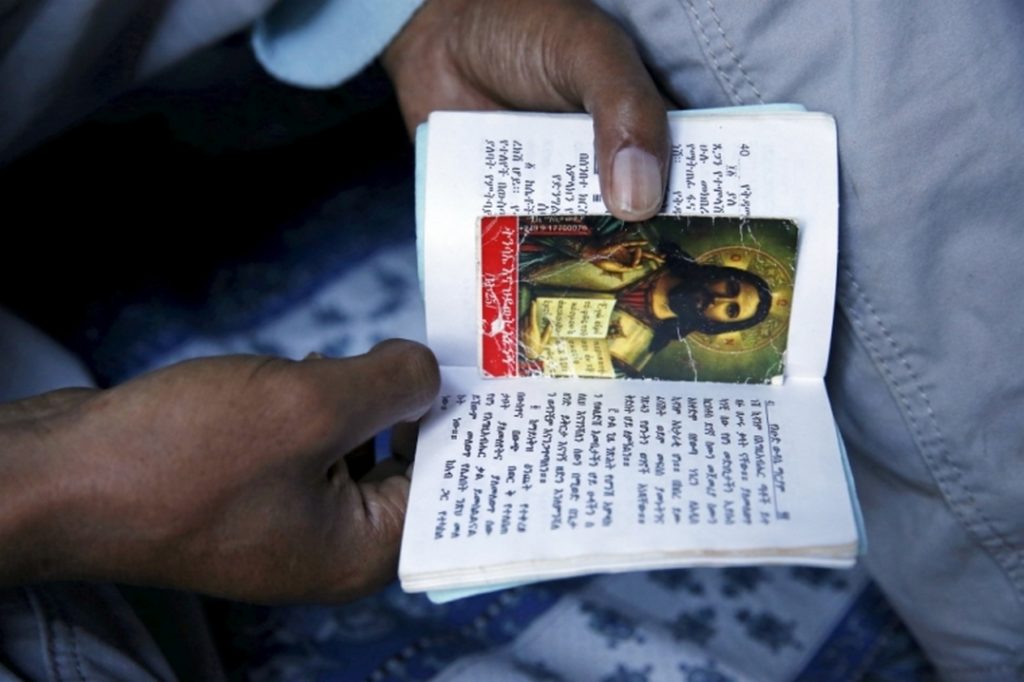 Christian migrants from Eritrea and Ethiopia pray and read the bible before Sunday mass at the makeshift church in “The New Jungle” near Calais, France, August 2, 2015. | (Photo: Reuters/Pascal Rossignol)

At least 500 Christians have been killed in an ongoing spate of coordinated door-to-door attacks and thousands of traumatized survivors have fled for their lives over the last two months in southern Ethiopia’s Oromia regional state, including its capital Addis Ababa, according to reports.

Members of Qeerroo (which means “bachelors”), a youth movement of men from the ethnic Oromo group who have traditionally been Muslim, have allegedly gone on a killing spree in some parts of the Oromia regional state, extending south, southeast and east of Addis Ababa, since the assassination of a popular Oromo singer, Hachallu Hundessa, on June 29, according to Barnabas Fund, an international Christian aid agency.

“Some of the Qeerroo militants held lists of Christians and were helped by local authorities, often run by Muslims in the Oromia region, to find individuals, particularly those actively involved in supporting the Church,” the agency reported, after receiving reports from its regional contacts.

“The Qeerroo extremists arrived in cars and, armed with guns, machetes, swords and spears, sought out and slaughtered Christians. Children were forced to witness their parents being brutally murdered with machetes,” it added.

An Oromo Christian was beheaded after he refused to tear off the thread around his neck, which is worn by many Ethiopian Christians as a sign of their baptism. The attackers told his wife that only those who prostrate before Allah for prayer are considered part of the Oromo community.

While local Muslims in the Bale Agarfa area saved some Christians risking their lives, police in some incidents stood by and watched as the Christians were murdered.

Christians’ businesses and houses were burned down, vandalized or destroyed.

In the town of Dera, a witness said the attackers desecrated corpses by “dancing and singing, carrying the chopped or hacked body parts of those they slaughtered.”

In Gedeb Asasa, a witness said the hacked bodies of an elderly Christian couple, who were beaten to death in their home, were dragged through the streets.

“Many still live in fear. Christian leaders from all denominations visited the areas. I watched news where priests and pastors physically wept in tears while listened to horrors from the victims’ families,” a regional contact told Barnabas Fund.

The agency said while the Ethiopian government suspended the internet in the region for several weeks in an attempt to reduce incitement to violence through social media channels, security forces had been slow to intervene to halt the atrocity.

Oromo is the country’s largest ethnic group but remains marginalized. While Oromos have been fighting for self-rule, opposition groups are banned and critics are jailed. The singer, Hundessa, was an activist and known for his songs of resistance. He sang songs about romance and political freedom.

Attorney General Adanech Abebe claimed in July that two men had confessed to killing the singer, saying an armed splinter wing of the Oromo Liberation Front, an opposition group, was behind the singer’s killing to incite ethnic tension and overthrow the government, according to The New York Times.

“Those who move away from this are often seen as pariahs or not a part of the Church at all. Also, in some parts of Ethiopia, there are primarily Muslim areas where Christianity is seen as a false religion. In these areas, both Orthodox and Protestant Christians are targeted for their faith,” ICC added.

Last year, Mekane Yesus Evangelical Church in the town of Robe in Bale zone, southeast of the capital Addis Ababa, was ordered by the Oromia Regional State Authorities to leave its premises within 30 days. The eviction letter, signed by the mayor, Birhanu Dadi Tafesse, said the church’s neighbors had complained of noise.