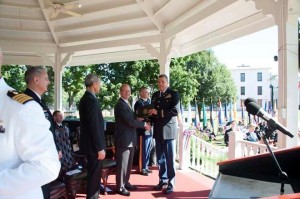 Fr Baktis graduates from the US Army War College

SYOSSET, NY [OCA] – On Friday, July 26, 2013, history was made as Priest Peter Baktis Ch (COL) USA became the first Orthodox Christian Chaplain to graduate from the US Army War College, at which time he was awarded a Master Degree in Strategic Studies and was certified for Joint Professional Military Education Level 1.

Father Peter also received a new assignment as Command Chaplain for the US Army Intelligence and Security Command, a Direct Reporting Unit to Department of the Army.  This marks another “first” inasmuch as he is the first Orthodox priest to be assigned to a Major Command.

“I hope that this has opened the door for others who will follow me,” said Father Peter.

The US Army War College educates and develops leaders for service at the strategic level while advancing knowledge in the global application of Landpower.

The late Archpriest Vladimir Borichevsky was the first Orthodox priest to be appointed to serve as a military chaplain in the early 1940s.  Today, the Orthodox Church in America is a member of the National Conference of Ministry to the Armed Forces and the Endorsers for Chaplaincy Veterans Affairs Centers and is recognized by the Armed Forces Chaplains Board to certify and endorse chaplains to serve in the armed forces.