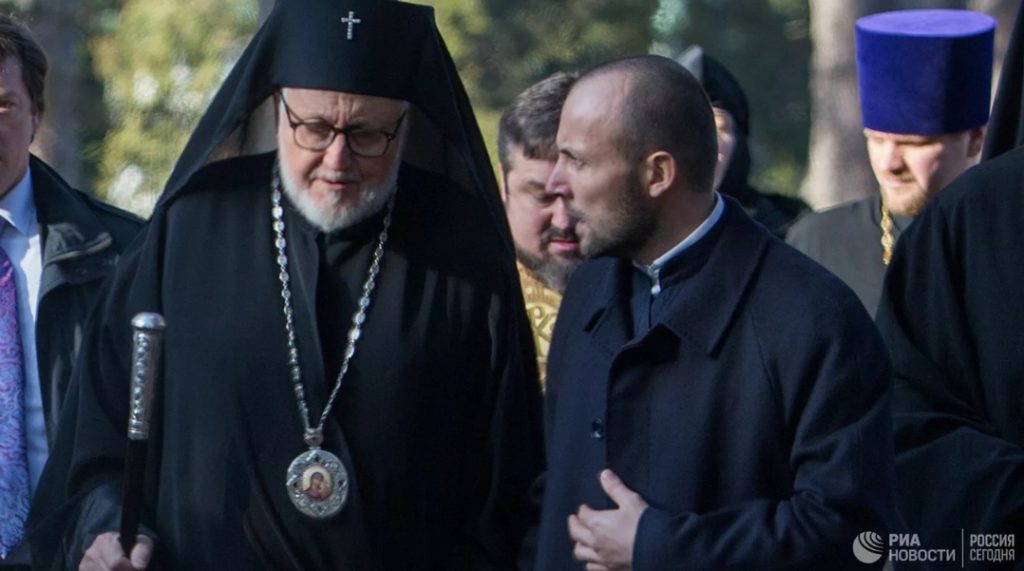 His Eminence Archbishop John of Chariopoulis

[PARIS] His Eminence Archbishop John of Chariopoulis, the head of the Archdiocese of Russian Churches in Western Europe, published an open letter to his clergy and laity yesterday, laying out his canonical and legal arguments against the recent decision of the Patriarchate of Constantinople to canonically release him and move the Archdiocese’s parishes under the local Greek metropolitans, including under Metropolitan Emmanuel of Gaul in France.

The communiqué is published in French on the Archdiocese’s official website.

Abp. John opens by characterizing Met. Emmanuel’s letter to the clergy and laity as “falsely alarming about the reality of the legal situation of our Archbishopric and the scope of our General Assembly on Saturday.”

“I deeply regret that such untruths can be spread within our churches,” he continues.

In his letter, Met. Emmanuel informed the people of the Archdiocese of the Patriarchate’s decision to relieve Abp. John of any authority over the Archdiocese and to move the French communities under his own omophorion, and that the General Assembly scheduled for tomorrow “cannot have any decision-making power.”

Abp. John writes that he consulted with professors of canon law and legal counsel and notes that the Archdiocese “is an association placed under the aegis of the laws of July 1, 1901 on associations and of December 9, 1905 on religious associations.” He argues that, “The provisions of the law of 9 December 1905 do not provide that a spiritual authority from which a canonical obedience derives may interfere in the internal affairs of a religious association.”

On the contrary, he writes, it is the Archdiocesan statutes that govern relations with the spiritual authority. It is in this light that what is being said must be understood, he contends.

Regarding his spiritual authority, Abp. John argues that a canonical leave granted without a request is not canonically valid. Abp. John had not requested a release and was surprised to find out that the Holy Synod had dismissed him from the Patriarchate. “I received a leave of absence as an individual that I never asked for because I would never have agreed to give up on you,” he writes to his flock.

“I am still part of the Ecumenical Patriarchate,” he contends.

He also notes that according to the Archdiocese’s own statutes, a locum tenens (in this case Met. Emmanuel) has to be appointed by the Holy Synod, though Met. Emmanuel was appointed by Patriarch Bartholomew alone. “It is therefore not canonically valid,” Abp. John writes.

He also notes that both civil law and the statutes state that a locum tenens can be appointed when the ruling hierarch is incapacitated, has reposed, or has requested retirement, none of which are true in this case.

Abp. John also states that Met. Emmanuel cannot legitimately challenge his administrative authority, as that is governed solely by French civil law. The law of December 9, 1905 does not provide, he writes, that a spiritual authority from which a canonical obedience derives can decide on the Archdiocese’s dissolution—thus the Patriarchate has no right to dissolve it or transfer its communities, he argues.

Moreover, according to the statutes, the Archbishop can only be removed by decision of the Holy Synod, which did not happen in this case. “The conclusion is that none of the conditions exhaustively laid down in our statutes for the termination of my administrative duties are legally fulfilled,” Abp. John writes.

“Your Archbishop therefore has, as in the past, all spiritual and administrative authority … including to preside over our General Assembly,” the hierarch confidently writes.

“The administration of our archdiocese is therefore not transferred to the Orthodox Metropolis of France of the Ecumenical Patriarchate,” Abp. John continues, noting that such a transfer could only take place following a General Assembly vote in its favor.

Conversely, Archimandrite Romanos (Anastasiades) of Crete, a loyal servant of Patriarch Bartholomew, argues that the Western European Exarchate was never a diocese and thus Abp. John was only a titular hierarch, serving at the good pleasure of Pat. Bartholomew.

An English translation of Fr. Romanos’ statement appears on the Facebook page of Fr. Kristian Akselberg, a cleric of the Patriarchate of Constantinople serving in England.

“As titular Archbishop, +John was given the particular task of administering the Exarchate of Parishes of the Russian Tradition in Western Europe. However, from the moment this Exarchate was dissolved, His Eminence Archbishop John had absolutely no right to involve himself—administratively, pastorally, and liturgically—with the parishes, clergy, and faithful of the former Exarchate,” Fr. Romanos writes.

“He, however, without having any further relevant authorization, continued to act in accordance with his former responsibilities; something the sacred canons punish,” he continues, referring to Canon 35 of the Holy Apostles, Canon 18 of the Synod of Antioch, and Canon 3 of the Council of Sardica, which govern relations between bishops and dioceses.

Whereas Abp. John writes that he was released by Pat. Bartholomew himself, not the Holy Synod, Fr. Romanos writes that it was by decision of the Holy Synod. “This decision was seemingly made without imposing the canonical punishment he should have received,” he states.

He also argues that if the Holy Synod has the right to appoint Abp. John, then it has the right to remove him. The previous Exarch was transferred from his responsibilities with the Exarchate without his request, Fr. Romanos notes.

He also argues that the sacred canons of the Church take precedence over the Archdiocese’s statutes and that the Archdiocese has been in defiance of the statutes since it lost its Exarchate status in November 2018.

The Archdiocese’s General Assembly will be held tomorrow in Paris and will discuss the possibility of joining the Moscow Patriarchate, which has offered to receive the entire Archdiocese without any changes to its spiritual or administrative traditions.