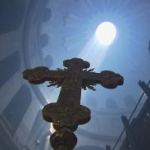 Church of the Holy Sepulchre – Jerusalem

(CBS News) The exodus from the Holy Land of Palestinian Christians could eventually leave holy cities like Jerusalem and Bethlehem without a local Christian population, Bob Simon reports. Why are they leaving? For some, life in the middle of the Israeli-Palestinian conflict has become too difficult.

The following script is from “Christians of the Holy Land” which aired on April 22, 2012. Bob Simon is the correspondent. Harry Radliffe, producer.

Christianity may have been born in the Middle East, but Arab Christians have never had it easy there, especially not today. In Iraq and Egypt, scores of churches have been attacked, hundreds murdered. In Syria, revolution seriously threatens Christian communities. The one place where Christians are not suffering from violence is the Holy Land: but Palestinian Christians have been leaving in large numbers for years. So many, the Christian population there is down to less than two percent, and the prospect of holy sites, like Jerusalem and Bethlehem, without local Christians is looming as a real possibility.

This is what the Holy Land looks like today. Bethlehem, where Jesus was born. Nazareth, where he grew up. Jerusalem, where he died and where Christians believe he was resurrected. Nazareth is inside the state of Israel. Bethlehem is on the Israeli-occupied West Bank. The Christian section of Jerusalem is also under Israeli control.

We know the area well — know that it is arguably the most fought over piece of real estate in the world, sacred to half of humanity. Still, when we decided to do the story last year, we did not realize our story would become so controversial.

Our story begins in Bethlehem, where it all began. We went to Saint Catherine’s in the Church of the Nativity.

For local Catholics, this is their parish church. The day we went, a confirmation was underway. Father Marwan Dides, a Franciscan, led one child after another up to the altar, watched by proud parents. The church was so crowded it was difficult to believe that Christians now makeup only 18 percent of what was for centuries an overwhelmingly Christian town.

Father Dides: We are the living stones of the Holy Land. From here, it all started. And it had to continue. It’s a must. It must continue. If there is no people, no Christians here, it will never continue.

Here in Jerusalem, the numbers are even bleaker than in Bethlehem.

Theophilos the third, the patriarch of the Greek Orthodox, has lived through the decline. His church, the Church of the Holy Sepulcher, is the most sacred site in Christendom. He took us up to the roof. You’ve got to know a patriarch to get here.

Theophilos: Come in. You are inside the Holy Sepulcher. Just inside here is the tomb.

That is the tomb which covers the site of the resurrection.

Bob Simon: When you first came here in 1964, what was the percentage of Christians in the old city?

Theophilos: There were around 30,000 of– Christians living in the Old City.

Bob Simon: And now how many are there?

Religious leaders are afraid Jerusalem could become a museum, a spiritual theme park, a great place for tourists and pilgrims, but not for the Arab Christians whose roots date back to the church’s very beginnings.

Mitri Raheb: Christianity started here. The only thing that Palestine was able to export so successfully was Christianity.

Mitri Raheb is a Palestinian, a Christian and a Lutheran minister from Bethlehem. He runs schools, cultural centers and health clinics.

Mitri Raheb: Christianity has actually on the back a stamp saying, “Made in Palestine.”

Palestinian Christians, once a powerful minority, are becoming the invisible people, squeezed between a growing Muslim majority and burgeoning Israeli settlements. Israel has occupied the West Bank for 45 years.

Mitri Raheb: If you see what’s happening in the West Bank, you will find that the West Bank is becoming more and more like a piece of Swiss cheese where Israel gets the cheese that is the land, the water resources, the archaeological sites. And the Palestinian are pushed in the holes behind the walls.

Israel built the wall over the last 10 years, which completely separates Israel from the occupied West Bank. The wall was built to stop Palestinian terrorists from getting into Israel. And it’s worked. Terrorism has gone down 90 percent.

At the same time, the wall completely surrounds Bethlehem, turning the “little town” where Christ was born into what its residents call “an open air prison.”

Bob Simon: Do you remember the day they put up the wall?

Christie Anastas: Yeah. Actually, it was in 2003 and I was about 14 years old. I went to school one day and came back and found the wall surrounding the house.

Christie Anastas lives with her mother Claire, her father, brother and sister, in this house which is surrounded on three sides by the wall.

Bob Simon: How do you live with this?

Christie Anastas: Well, it’s not easy, actually, but you get used to it. Because you have to.

The Anastas family lives on the third floor. This is the view from the kitchen, from the master bedroom and bathroom. The children’s room has a good view of this Israeli guard tower.

The family runs a souvenir shop on the ground floor, sells Christian artifacts on what used to be the busiest commercial street in town. Now, it’s a dead end.

Bob Simon: Members of your family have already left?

Bob Simon: And they have asked you to leave too?

Bob Simon: What do you say to them?

Claire Anastas: I tell them, we have to stay. We need to stay and struggle and fight. This is our cross.

For all Palestinians, just leaving Bethlehem is a struggle. Getting to Jerusalem, only seven miles away, whether it’s to pray, go to a doctor, visit family members, or work, means going through this Israeli checkpoint. That can take hours but before Palestinians can get even this far, they need a permit from the Israelis which can take weeks or months to obtain and is frequently denied.

Michael Oren: We regret any inconvenience caused by the security precautions. But it’s their inconvenience, it’s our survival.

Michael Oren, who used to be Israel’s director of Interreligious Affairs, is Israel’s ambassador to the United States.

For Palestinian Christians, the survival of their culture is in danger. In towns like Bethlehem, which used to be distinctively Christian, Muslims now are a clear and growing majority. The veil is replacing the cross. But inside Israel, in Christian towns like Nazareth, Arabs are Israeli citizens and, according to Ambassador Oren, they’re thriving. The reason Christians are leaving the West Bank, he says, is Islamic extremism.

Michael Oren: I think that the major problem in the West Bank as in elsewhere in the Middle East is that the Christian communities are living under duress.

Bob Simon: And this duress is coming from Muslims, not from the Israel occupation?

Ambassador Michael Oren: I believe that the major duress is coming from that.

Zahi Khouri is a Palestinian businessman. He owns the West Bank Coca-Cola franchise.

Zahi Khouri: I’ll tell you I don’t know of anybody and I probably have 12,000 customers here. I’ve never heard that someone is leaving because of Islamic persecution.

Ari Shavit: I think this is a land that has seen in the last century a terrible struggle between political Judaism and political Islam in different variations.

Bob Simon: And the Christians are being squeezed in the middle between the Jews and the Muslims?

Bob Simon: Should Israel be concerned about that?

Ari Shavit: I think we should all be concerned about it. Political Judaism and political Islam are rocky. They are harsh. And the friction, the clash between them is very violent.

In 2009, this group of Christian activists did something unprecedented. They published a document called Kairos, criticizing Islamic extremism and advocating non-violent resistance to the Israeli occupation which they called a sin against God.

It was endorsed by the leaders of 13 Christian denominations including Greek Orthodox, Roman Catholic, Lutheran and Anglican.

Michael Oren: These are denominations who have been exceedingly critical of the State of Israel. And sometimes to the point of going beyond legitimate criticism. And so–

Bob Simon: What does that mean to go beyond…

Michael Oren: Accusing of us– of crimes that would be very, I think, historically associated with anti-Semitism. And it was actually so inflammatory, Bob, that we didn’t– many of us didn’t even bother responding to it.

Mitri Raheb: They are fearful of this document because they are afraid this might influence the Christian world.

Reverend Raheb, who helped write the document, says it’s anything but anti-Semitic.

Bob Simon: Do you think the Israeli government ever thinks of the fact that if Christians aren’t being treated well here, and America is an overwhelmingly Christian country, that this could have consequences?

Ari Shavit: Israel is not persecuting Christians as Christians. The Christians in the Holy Land suffer from Israeli policies that are a result of the overall tragic situation. And this, of course, has consequences for everybody.

For Israel, there could be serious economic consequences. According to Israeli government figures, tourism is a multi billion dollar business there. Most tourists are Christian. Many of them are American. That’s one reason why Israelis are very sensitive about their image in the United States. And that could be why Ambassador Oren phoned Jeff Fager, the head of CBS News and executive producer of 60 Minutes, while we were still reporting the story, long before tonight’s broadcast. He said he had information our story was quote: “a hatchet job.”

Michael Oren: It seemed to me outrageous. Completely incomprehensible that at a time when these communities, Christian communities throughout the Middle East are being oppressed and massacred, when churches are being burnt, when one of the great stories in history is unfolding? I think it’s– I think it’s– I think you got me a little bit mystified.

Bob Simon: And it was a reason to call the president of– chairman of CBS News?

Michael Oren: Bob, I’m the ambassador of the State of Israel. I do that very, very infrequently as ambassador. It’s just– that’s an extraordinary move for me to complain about something. When I heard that you were going to do a story about Christians in the Holy Land and my assum– and– and had, I believe, information about the nature of it, and it’s been confirmed by this interview today.

Bob Simon: Nothing’s been confirmed by the interview, Mr. Ambassador, because you don’t know what’s going to be put on air.

Bob Simon: Mr. Ambassador, I’ve been doing this a long time. And I’ve received lots of reactions from just about everyone I’ve done stories about. But I’ve never gotten a reaction before from a story that hasn’t been broadcast yet.

Michael Oren: Well, there’s a first time for everything, Bob.

This land has seen just about everything over the centuries. The ritual in the Church of the Holy Sepulcher the day before Easter hasn’t changed in more than a millennium.

We went into the church with Patriarch Theophilus and watched thousands jostling to get as close as they could to the tomb from which they believe Christ was risen.

Pilgrims have been coming here since 1106 AD to wash themselves in the holy fire, to celebrate the founding miracle of Christianity. They will certainly continue to do so. But how many will be coming from the neighborhood? That’s not a religious question anymore. It’s political.