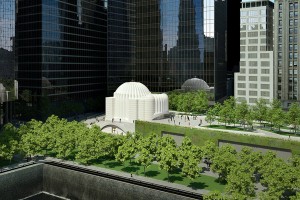 St. Nicholas Church, Destroyed on 9/11, to Rebuild With Byzantine Design

A gleaming, monumental and unmistakable symbol of Orthodox Christianity would rise at the south end of the National September 11 Memorial under plans drawn up for the new St. Nicholas Greek Orthodox Church.

The original St. Nicholas Church was crushed on Sept. 11, 2001, when the south tower of the World Trade Center collapsed. Plans to replace it on the grounds of the new trade center, across Liberty Street from the memorial, have sputtered, stoppedand crept ahead in the intervening years. But no images of the new church have been made public.

Eight images published recently on the website of the architect Santiago Calatrava, who is designing St. Nicholas, showed a building that would draw inspiration from the great churches of the East: Hagia Sophia and the Church of the Holy Savior in Chora. Both are in Istanbul. The shallow dome of the new St. Nicholas Church will have 40 ribs, as does the dome of Hagia Sophia. Alternating bands of stone on the corners will echo the walls of the Chora church. Though both date to the early centuries of Christianity, they both were later used as mosques before becoming museums. 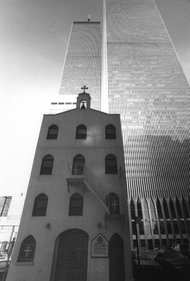 St. Nicholas Church, via Associated Press
The church, which will include a nondenominational bereavement center, will stand in sharp contrast with its predecessor, next to the World Trade Center.

While that ecumenical provenance may accurately reflect the stated desire of the Greek Orthodox Church to create a space in which all visitors will feel welcome, it will almost certainly ignite a new round of debate over the role of religion at or around the World Trade Center. In 2010, national attention focused on a bitter fight over an Islamic community center and mosque that was proposed nearby.

Mr. Calatrava, the architect of the World Trade Center Transportation Hub, is known for his expressive designs and, sometimes, projects with impressive cost overruns. Certainly, his St. Nicholas, which will include a nondenominational bereavement center, will look nothing like the modest old parish church that it is replacing. That was housed in a decrepit 19th-century tavern at 155 Cedar Street with a little rooftop bell cote and cross to announce its purpose.

The new church will occupy the corner of an L-shape block bounded on the north by Liberty Street and on the east by Greenwich Street. Much of this block is already taken up by a large bulkhead being constructed over entrance ramps to a vehicle security center beneath the World Trade Center. The church and a landscaped open space known as Liberty Park will sit atop this bulkhead, a little more than 20 feet above street level.

That a Spanish architect should design a modern Byzantine church in Lower Manhattan for the Greek Orthodox Archdiocese of America, based on buildings in Turkey that were used for Islamic worship, goes to the heart of the message the archdiocese says it hopes to send with the $20 million project. The new St. Nicholas is to open by early 2016.

“If I may quote Jesus, ‘My house shall be called a house of prayer for all people,’ ” said the Rev. Mark Arey, a spokesman for the archdiocese. “It will be open to everyone: the believer, the unbeliever, the Orthodox Christian, the atheist. Whoever you are, this is a space that you can come into and find some meditative solace.”

Meditative solace, however, may be elusive in the near term.

In 2011, the American Atheists, a nonprofit group, filed a lawsuit to prevent the inclusion of a cross-shape steel beam from the wreckage of the original trade center in the memorial museum on the site. The suit was dismissed in March.

A year earlier, plans to create an Islamic community center and mosque on Park Place, two blocks north of the trade center, attracted furious criticism. Mayor Michael R. Bloomberg emerged as a forceful defender of the proposal, citing the constitutional protection of worship. Father Arey recalled that Archbishop Demetrios, the primate of the Greek Orthodox Church in America, had stood with the mayor.

While the building has recently served as a prayer space, the full center has not been built.

Comments on the website of the TriBeCa Citizen, which published the renderings, show that some viewers already say St. Nicholas resembles a mosque. The presence of the drawings on Mr. Calatrava’s website was noted on Tuesday by The New York Post.

Father Arey said he would welcome the dialogue ahead.

“The dome, invented by the Mycenaean Greeks, was a Christian form of architecture that was borrowed by the Islamic world,” he said. “There are going to be some wonderful teachable moments down the road.”

Mr. Calatrava was chosen after an invitation-only competition with 12 other architectural firms. His design, Father Arey said, has a “certain gravitas.”

“I believe he has achieved mass without volume,” Father Arey said. By that, he meant that the church, which is only 65 feet tall from its floor to the tip of the cross on the dome, conveys the sense of having a substantive presence.

The Port Authority of New York and New Jersey, which controls the redevelopment of the World Trade Center, is to lease the church site for 99 years to the Greek Orthodox Archdiocese of America, based in New York City. In exchange, the church relinquished the 155 Cedar Street site to accommodate the authority’s building plans.

Share. Twitter Facebook Pinterest LinkedIn Tumblr Email
Previous ArticleNew OCA Guidelines for ordination, appointments, and clergy transfers
Next Article Will the Assembly of Bishops Lay a Foundation for Unity? Why is our Geographic Church in America Subject to Patriarchates Abroad Whose Actions Appear to be Obstructing Unity?