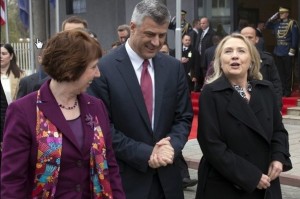 PRISTINA, Kosovo — U.S. Secretary of State Hillary Rodham Clinton toured a Serbian Orthodox church in Kosovo Wednesday as she pressed America’s close ally to step up its minority outreach while trying to convince ethnic Serbs that they have a home in Europe’s youngest nation.

At the St. Nicholas Church in Kosovo’s capital, a site of anti-Serb riots eight years ago, Clinton greeted members of the Serb minority who’ve returned to Kosovo after years abroad despite continued interethnic tensions. In Pristina, she also joined the European Union’s foreign policy chief, Catherine Ashton, in seeking to advance talks between Serbia and its former province so both can one day join the 27-nation EU.

The U.S. hopes Kosovo will also become a member of NATO, and hopes stability across the region will end a process of Balkanization that began with the breakup of Yugoslavia two decades ago and which minority groups in Bosnia and Kosovo threaten to continue.

One stumbling block is the fate of 60,000 Serbs in northern Kosovo who reject their national government’s authority, and instead seek independence or incorporation into an expanded Serbia. Washington and Brussels say neither is possible, and are hoping future agreements between Kosovo and Serbia on issues such as freedom of movement, joint customs control, utilities and government services will convince ethnic Serbs that they’ll be protected in Kosovo and not cut off from friends and family across the border.

“The United States is firmly committed to Kosovo’s sovereignty and territorial integrity, and to seeing the rule of law extend throughout Kosovo,” Clinton said unequivocally, speaking to reporters alongside Ashton and Kosovo’s Prime Minister Hashim Thaci. “We oppose any discussion of territory changes or reopening Kosovo’s independent status. These matters are not up for discussion. The boundaries of an independent, sovereign Kosovo are clear and set.”

But she said Kosovo’s government and people needed to embrace changes if they are to move forward more than decade after NATO bombed Serbia to stop a war between Kosovo’s predominantly ethnic Albanians and Serbs who consider the area the cradle of their statehood and the Christian Orthodox religion. Mentioning the statue of her husband, President Bill Clinton, in Pristina’s downtown nearby a store named “Hillary,” Clinton called Kosovo’s future a deeply personal cause.

Although the United States is only helping in the normalization process with Serbia, Kosovo remains a bastion of pro-American sentiment and the U.S. voice there carries weight. Clinton urged Kosovo’s leaders to address the concerns of Serbs so an environment emerges where “people of all backgrounds have a chance to succeed.”

But she stressed that ethnic Serbs needed to step forward as well and embrace their country, calling for “not only changes by the government, but also by the people.”

Ashton, speaking after the joint meetings she and Clinton had with Thaci and President Atifete Jahjaga, said the Serbia-Kosovo dialogue she is leading “is about making lives better.” She sidestepped the larger political question of Kosovo’s status.

The talks put off — for now— the issue of independence, which some 90 countries have recognized since Kosovo officially broke away from Serbia in 2008. Serbia’s leaders, however, say they’ll never accept an independent Kosovo, a point Prime Minister Ivica Dacic reiterated after his discussions with Clinton and Ashton in Belgrade on Tuesday. The U.S. recognizes Kosovo, but continued holdouts in Europe mean Ashton cannot take a formal position.

At the church, Clinton met with a group of Kosovo Serbs who’ve returned from abroad to government jobs that promote greater repatriation among ethnic Serbs. She also met the second-highest ranking Serbian Orthodox official in Kosovo, a local parish priest and two ethnic Serb ministers in Kosovo’s government. The church was burned in two days of riots across Kosovo in 2004 and is being touted as a symbol of the government’s commitment to a new inclusiveness.