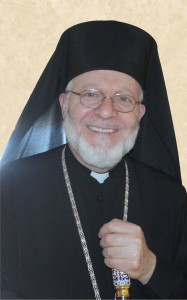 “Blessed is he that comes in the name of the Lord! Hosanna in the highest!”

The Holy Synod of Bishops of the ancient Patriarchate of Antioch, and the faithful in America, has proclaimed you “Worthy!”  May your pastorate be as well, a blessing to all Orthodox Christians who live in North America who also say to you, “He is worthy!” May our Lord and God and Savior, Jesus Christ, the Great Shepherd, bless and keep you. May He grant you many good years as leader of the Antiochian Archdiocese and its faithful clergy and laity.

The Membership of Orthodox Christian Laity has great respect for the Antiochian Archdiocese which has provided great leaders, moments, and institutions that transcend the present divisions between the various jurisdictions in America. Orthodox Christian Laity is grateful to your predecessors of blessed memory, Metropolitans Antony Bashir and Philip Saliba, who, through the decades, have worked diligently with other bishops to come to this point in history to develop a blueprint for administrative unity acceptable to the Patriarchates.

The Patriarchs have requested the input and help of all bishops in the United States to create canonical order in this geographic area; your presence is a key to establishment of good order in the Church. We know that with your prayers and leadership as one of the first hierarchs of the Assembly this unity can come to be.

Orthodox Christian Laity is committed to supporting the Assembly of Canonical Orthodox Bishops of The United States as it develops a blueprint for an administratively unified Church here. Orthodox Christian Laity and its board offer its services to you to assist you in the work of your ministry.  Please do call on us. As you assume this leadership role we pray for God’s blessings on you and we do look forward to meeting with you at some future date to hear of and discuss your vision for the future of Orthodox Christianity in The United States.