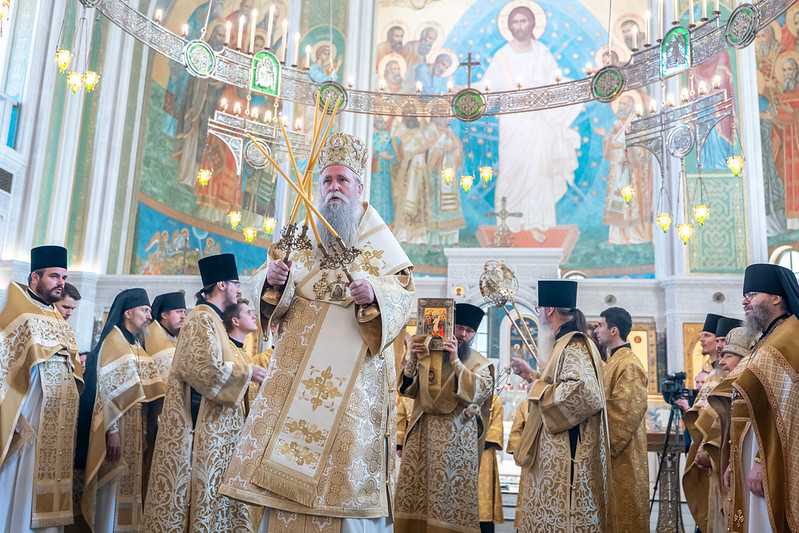 In the Church of the Resurrection of Christ and the New Martyrs and Confessors of the Church of the Russian Sretensky Monastery in Moscow on October 16, Metropolitan Ioanniky of Montenegro and Primorye, who arrived in Moscow at the invitation of His Holiness Patriarch Kirill of Moscow and All Russia, celebrated the Divine Liturgy.

Metropolitan Ioannikije of Montenegro and Primorye and Bishop Jovan of Pakrac and Slavonia, both hierarchs of the Serbian Patriarchate, are now in Russia.  The primary purpose of their visit is to open the international festival “Serbian consolation to the Russian heart,” organized by the Orthodox St. Tikhon Humanitarian University and held on October 18-28 in Moscow.  The first evening of the festival is dedicated to the memory of Metropolitan Amfilohije of Montenegro (1938-2020), predecessor of Metropolitan Ioannikije.  It was therefore very logical that Metropolitan Ioannikije was invited to attend.  The program also includes a film and an art exhibit relating to the Jasenovac death camp, located in the Croatian diocese of Bishop Jovan.  This explains why he was invited.  The entire program for the festival can be seen at https://festivallihov6.tilda.ws/.

On Sunday, October 16, Metropolitan Ioannikije celebrated the Liturgy in the Church of the Resurrection of Christ and the New Martyrs and Confessors of the Russian Church, located at the Sretensky Monastery in Moscow.  https://pravoslavie.ru/148762.html  He made no reference to Ukraine.  However, he stated:  “In this difficult time, it is very important that we pray together and feel the suffering and troubles that we all, each in our own way, are experiencing and going through.”  He also said: “We believe in the strength of the Russian Orthodox Church, which survived the most severe trials during the Bolshevik-Communist times, persecution and suffering.”  On October 17 the two Serbian bishops met with Metropolitan Anthony of Volokolamsk (head of the Moscow Patriarchate’s DECR).   https://mospat.ru/en/news/89723/

On the morning of October 18, Patriarch Kirill celebrated the feast day of the saints of Moscow in the Dormition Cathedral in the Kremlin.  The two Serbian bishops concelebrated with the Patriarch.  http://www.patriarchia.ru/db/text/5968634.html  The text of the Patriarch’s sermon is found at http://www.patriarchia.ru/db/text/5968673.html  The Patriarch again emphasized his familiar theme that the spiritual unity of Holy Rus’ (encompassing today’s Russia, Ukraine, and Belarus) must be maintained and that Holy Rus’ constitutes “one people” who are “united by the bounds of the Russian Orthodox Church.”  He is confident that the Lord hears the prayers for “the spiritual health of our entire united historical people of Holy Rus’.”  The Patriarch acknowledges that “everyone must understand that he is shooting at his brother” and should pray for “the end of the war, the establishment of peace and the spiritual unity of all our people.”  However, the Patriarch rejects the Western idea of pacifism, namely peace under any circumstances.  There must be a lasting peace with justice.  “And in order for it to be so, it is necessary that by the power of God all these diabolical thoughts be eradicated from the consciousness of people who do not strive for the spiritual unity of Holy Rus’, so that we all realize the responsibility for maintaining the spiritual unity of the Rus’ world.”  From this, it is clear that the Patriarch believes that present hostilities are justified to preserve the spiritual unity of Rus’ and to eradicate the diabolical thoughts of those who do not strive for this unity.

At the Liturgy on October 18, Metropolitan Ioannikije delivered some short remarks. https://mitropolija.com/2022/10/18/patrijarh-ruski-kiril-bogosluzio-u-uspenskom-saboru-kremlja-sasluzivali-mu-i-mitropolit-crnogorsko-primorski-joanikije-i-episkop-pakracko-slavonski-jovan/   His remarks included the following:  “We cannot help much in these difficult times, but be assured, Your Holiness, and dear fathers, dear brothers, that not only we bishops and our clergy, but also the entire Serbian people are praying for you personally and for the whole of Holy Rus’.  May the Lord, through the prayers of the Most Holy Mother of God and all the saints, and also through our prayers from below, grant grace and mercy, enlighten all those who are most responsible, soften hearts and start a dialogue as soon as possible, to talk and through fraternal dialogue with trust to reach peace and that God’s grace and God’s justice, God’s love for humanity, are manifested through all these trials.”

It is interesting that Metropolitan Ioannikije will next spend four days, October 20-23, with Metropolitan Ambrosij in Tver.  This visit is occurring at the request of Ioannikije.  https://tvereparhia.ru/news/events/23-oktjabrja-mitropolit-chernogorsko-primorskij-ioannikij-sovershit-bozhestvennuju-liturgiju-v-voskresenskom-kafedralnom-sobore-tveri/  It appears that the two hierarchs first met in 2019 when Ambrosij took part in the celebration of the 800th anniversary of the Budimla-Niksic diocese in Montenegro then headed by Ioannikije.   Ambrosij was the very popular and relatively progressive rector of the St. Petersburg Theological Academy from 2008 to 2018.  https://tvereparhia.ru/about/pravjashhij-arhierej/  He was then rector of the Moscow Theological Academy and the Sretensky Theological Seminary for short periods of time.  Unlike Patriarch Kirill, he has been relatively quiet with respect to the events relating to Ukraine.

On October 14, Patriarch Porfirije of Serbia was enthroned at the historic Monastery of Peć in Kosovo.  https://orthodoxtimes.com/the-patriarch-of-serbia-was-enthroned-at-the-monastery-of-pec-in-kosovo/   When the Serbian Patriarchate of Peć was established in 1346, this monastery became the seat of the Serbian Patriarchs.  The fact that the monastery is now in a country which has claimed its independence from Serbia necessitated some delay in this enthronement from the time that Porfirije was elected Patriarch on February 18.  He was therefore enthroned for the first time on February 19 in Belgrade.  The enthronement at the Peć Monastery was then subject to even further delays because of the pandemic situation in Kosovo.  The second enthronement has now finally occurred.  When Porjirije’s predecessor, Patriarch Irinej, was enthroned in 2010, he also had a first enthronement in Belgrade and a second at Peć.

Metropolitan Hilarion was also in Serbia on October 2 for the canonization of Saint Irinej, bishop of Bačka (1884-1955). https://spc.rs/svecani-cin-kanonizacije-episkopa-backog-svetih-mucenika/#  Hilarion served next to the Patriarch.  Metropolitan Hilarion also met with the Patriarch on September 5 during the Patriarch’s trip to Hungary and was present at various events in Hungary involving the Patriarch.  https://mospat.ru/en/news/89598/  From all of this, it appears to me that Patriarch Porfirije has taken a number of steps to show his strong public support for Metropolitan Hilarion after the latter’s demotion to Budapest.  It should also be remembered that the very influential Bishop Irenij, the present bishop of Bačka, is a close friend of Metropolitan Hilarion.  Although Serbia is normally a close ally of the Russian Federation, Serbia voted at the United Nations General Assembly to condemn “the organization by the Russian Federation of so-called referendums within the internationally recognized borders of Ukraine” and “the attempted illegal annexation” of the four regions.  Metropolitan Hilarion, since his assignment to Budapest, has publicly spoken only on strictly religious subjects.

The Holy Synod of the Moscow Patriarchate met on October 13.  The minutes of the meeting can be read at http://www.patriarchia.ru/db/text/5966901.html .  In Journal Entry 95 the Synod decided to “accept the Rovenky diocese in direct canonical and administrative subordination to the Patriarch of Moscow and All Rus’ and the Holy Synod of the Russian Orthodox Church.”   According to the minutes, this was done pursuant to an appeal from Archbishop Arkady and his diocesan council.  The action was based on “the practical impossibility of regular communication between this diocese and the Kiev Metropolis.”   The Rovenky diocese is located in the southern end of the Luhansk Oblast.  The city of Rovenky has been outside the control of Ukraine since 2014 and is located only 22 km from the Russian border.  The Rovenky diocese is now the first UOC diocese in eastern Ukraine to come under the direct jurisdiction of Moscow.  The decision on October 13 uses essentially the same language as the Synod’s decision on June 7 when the Synod accepted direct jurisdiction over the three dioceses in Crimea.   http://www.patriarchia.ru/db/text/5934527.html  However, the October decision describes an appeal by both the archbishop and the diocesan council, while the June decision only refers to an appeal by the bishops.

It is interesting that Moscow’s assumption of direct jurisdiction on October 13 does not also include the larger neighboring Luhansk diocese under Metropolitan Panteleimon.  Panteleimon was a member of the Russian Orthodox delegation, which was at the Kremlin for the speech of President Putin and the signing ceremony on September 30.  https://mospat.ru/en/news/89690/    He and Arkady visited Patriarch Kirill on July 17.  http://www.patriarchia.ru/db/text/5944605.html   It is very possible that the failure to assume jurisdiction over the Luhansk diocese may be due to a possible failure of the diocesan council to support such a move.  The UOC has not issued any statements with respect to Moscow’s assumption of jurisdiction over the Rovenky diocese or the three dioceses in Crimea.

The UOC has joined and posted the statement by the Ukrainian Council of Churches and Religious Organizations relating to the Russian missile attacks on Ukrainian cities following the explosion on the Kerch bridge.  https://news.church.ua/2022/10/11/zayava-vrciro-z-privodu-teroristichnix-obstriliv-mist-ukrajini-rosijskimi-vijskami/   The full text of the statement, adopted on October 10,  can be read in English at https://vrciro.org.ua/en/statements/uccro-statement-on-russian-terrorist-attacks-on-cities-of-ukraine.  The statement provides:

The Ukrainian Council of Churches and Religious Organizations fully condemns the terrorist attacks on Ukrainian cities carried out by Russian troops with the aim of intimidating our people.  All who participate in these brutal attacks on peaceful cities, both the leaders who give orders and the direct executors, as well as all who justify acts of inhuman cruelty, must know that they will be answered before the Almighty God and punished for their crimes.

We sympathize with those who suffered from the attacks, we pray for the victims, we ask God to bless our defenders.

We appeal to the international community, to the religious leaders of the world, with a call to condemn the acts of state terror carried out by Russia.  The terrorist state must be stopped as soon as possible!

We are witnesses to the fact that so many of our communities, seeing as their only goal the search for peace in the name of the Gospel, are in a state of turmoil. There are many Russians and Ukrainians among the parishioners of our churches who, along with all of us, are suffering from the current situation.

In particular, the statement that “if someone remains faithful to his calling and dies in the line of military duty, then he undoubtedly commits an act tantamount to a sacrifice … and this sacrifice washes away all the sins that a person has committed” (sermon of September 25, 2022 ), was received with great pain and misunderstanding.

We once again appeal to His Holiness [Patriarch Kirill] with the request to speak with all the force of the patriarchal word in favor of the peace process and call on all the leaders and responsible persons of the Russian Federation to join it.

Lastly, the Synod of the Patriarchate of Antioch has completed its meeting of October 12 to 17.  https://orthodoxtimes.com/the-holy-antiochian-synod-held-its-thirteenth-regular-session/  Among other actions, the Synod accepted the resignation of Metropolitan Joseph, the head of the Archdiocese of North America.