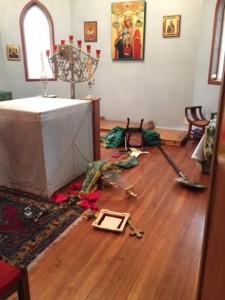 KODIAK, AK [Diocese of Alaska Communications] In a dramatic affirmation of the core beliefs of the Orthodox Christian community, Superior Court Judge Frank A. Pfiffner ruled yesterday that defendant Arkimedes Garcia acted with “gross religious disrespect” when he vandalized Kodiak’s Holy Resurrection Cathedral in June.  [See related story.]  Garcia pled guilty to a single consolidated charge of criminal mischief in the third degree, a Class C felony, on October 20, 2015.  In a non-jury trial on October 30, ruling Judge Pfiffner agreed with the State of Alaska’s argument that a “most serious” aggravating factor be applied.

Garcia was arrested on June 10 at the cathedral.  The doors and windows on the church had been damaged or broken, and numerous items in the church were disturbed, broken and/or desecrated.  Garcia was discovered exiting the church shirtless, shoeless and bloodied.  His blood was later found strewn around the church, including inside the altar.

Garcia’s guilty plea was one reason given for the Judge’s decision.  The plea substantiated the State’s argument that Garcia understood what he was doing when he used a shovel to smash into the church, pulled items off the altar and threw objects into windows.  Defense arguments that Garcia’s behavior had been out of character, that he had been suffering from a head injury, were found to be unsubstantiated.

Two other factors contributed to the Judge’s decision: the amount of the damage and the brief amount of time it took Garcia to inflict this damage.  Using evidence provided by Kodiak Police Department, Archpriest Innocent Dresdow, cathedral Rector, and church insurance documents, the judge ruled that Garcia inflicted $109,485.00 in damages to the physical assets of the church in a span of only ten minutes.  These assets included the windows, doors, altar cloths, ornamental fans, flooring, furniture, censors, a decorative Gospel cover, a censor, a tabernacle, two crosses gifted to the church from the Patriarch of Moscow, a glass vial and a hand cross brought to Kodiak by Saint Herman in 1794.  The cross, which normally rests on his reliquary inside the cathedral, is encased in a light metal riza which bears an icon of Christ.  The riza had “been peeled back like the top of a sardine can,” the Judge said.  “It can never be fixed.”

The tabernacle and the glass vial contained, respectively, the “reserve Sacrament” and Holy Chrism.  These items were among those which could not be quantified monetarily but which factored heavily in the Judge’s decision, due to the tremendous religious value these hold for the faithful.  In his comments, the Judge referred repeatedly to Father Innocent’s testimony over the previous two days, in which the role of the reserved Sacrament was discussed and the sacred nature of the Chrism defined.

The Judge rejected defense claims that the monetary damage was only about $65,000.00 and that the fact that it could have been greater were factors mitigating a “most serious offense” ruling.

The totality of the vandalism, Judge Pfiffner said, weighed heavily in his decision.  Holy Resurrection Cathedral is the oldest Orthodox Church in North America, he pointed out, and pilgrims from all over the world travel here to remember Saint Herman and venerate his cross.  It’s “overwhelming,” the Judge said, “especially the desecration of the reserved Sacrament and Holy Chrism and also the damage to Saint Herman’s cross.”

His Grace, Bishop David of Sitka and Alaska, attended two of the three days of testimony.  “The decision of Judge Pfiffner represents a true model of justice in every sense of the word,” he said.  “I saw him use his judicial authority to allow both sides to present all the evidence they sought to have admitted, to weigh it carefully and always inform the presenter that it would be given the weight it deserved in deciding the case.  His verdict shows his skill of being on the bench for many years and applying the law in a balanced and knowledgeable manner.

“We could ask for no better verdict than one that weighs all the evidence and reaches a conclusion based on the law and validates our belief in the system,” said Bishop David.  “Today, that is exactly what happened, and we should all give thanks to God for granting the wisdom and jurisprudence to Judge Pfiffner to decide this case as he did, with a careful interpretation of the law that leaves no question unanswered and no injustice not countered with truth.”