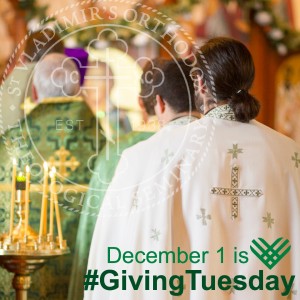 “Giving is at the very foundation of St. Vladimir’s Seminary’s mission, so we are enthusiastic again this year about taking part in this day dedicated to philanthropy,” said seminary Chancellor/CEO the Very Reverend Dr. Chad Hatfield. “Our professors give their hearts to teach the gospel of Christ. Our students give their time to prepare for service in the Church. Our graduates give their lives to minister to Christ’s flock.”

Last year, the seminary’s highly successful #GivingTuesday campaign raised $80,000. In an expression of love and solidarity with the suffering peoples in the Middle East, St. Vladimir’s offered a tithe of $8,000 to His Beatitude Patriarch John X of Antioch and All the East, to alleviate the dire conditions of people under his care.

“Because we believe in giving back at St. Vladimir’s, we will donate 10% of whatever we raise on #GivingTuesday,” continued Father Chad. “This year’s tithe will support the Orthodox Patriarchal Ecclesiastical School of Makarios III, our sister seminary in Nairobi, Kenya. This great center of Orthodoxy in Africa is in serious need of books for their library, and we want to help.”

Archimandrite Philip Mugadizi (SVOTS alumnus ’03), deputy dean of the Nairobi seminary, has been instrumental in arranging this year’s tithe. “We are delighted to partner with St. Vladimir’s for #GivingTuesday,” remarked Father Philip. “The relationship between our two theological institutions is growing stronger by the day, as evidenced by the upcoming visit of Dr. Paul Meyendorff, The Father Alexander Schmemann Professor of Liturgical Theology at St. Vladimir’s. It is our hope to continue this exchange and dialogue between our seminaries, offering opportunities for our seminarians, faculty, and staff to learn from one another. I hope that many people will support our schools on #GivingTuesday.”

“Given the response to #GivingTuesday last year, an anonymous supporter has challenged us to raise $50,000 on #GivingTuesday this year—and if we do, every penny will be matched. With this incredible matching opportunity, it would be within reason to expect that we could potentially take in $100,000 on December 1, with $10,000 going to our brothers seminarians in Nairobi, Kenya,” explained Father Chad. “These donations will spread the gospel across North America and Africa.

“Right now, we’re asking Orthodox Christians around the world to help us get the word out on their social media networks, through Facebook, Twitter, and Instagram,” Father Chad concluded, “and to stay in the loop about this venture by signing up for #GivingTuesday emails. Our website, www.svots.edu/givingtuesday, contains a host of resources for anyone interested in supporting Orthodoxy in America and Africa this December 1.”

Donate directly to SVOTS #GivingTuesday here (all monies will be totaledDecember 1, 2015).