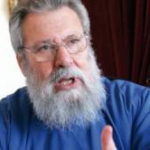 The leader of Cyprus’ Orthodox Christian church and Israel’s chief rabbi have signed a joint declaration aimed at forging closer bonds between the two countries’ citizens.

Archbishop Chrysostomos II and Rabbi Yonah Metzger signed the declaration in the Cypriot capital Tuesday. Chrysostomos said the initiative is aimed at ending any “hostility or suspicion” that had “poisoned” Cypriot-Israeli relations in the past.

Metzger said Cyprus and Israel are partners and share a similar history. He says the declaration can help improve cooperation.

The declaration comes amid blossoming ties between the east Mediterranean neighbors. The two countries are in talks to cooperate on exploiting offshore natural gas deposits.