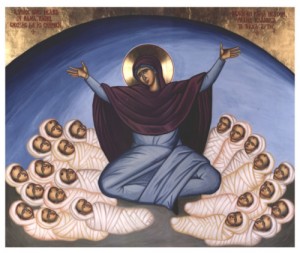 Rachel weeping for her children (Jeremiah 31:15)

The Orthodox Church in America (OCA) has issued a statement regarding the recent Supreme Court decision regarding same-sex marriage. I appreciate the following from His Beatitude Metropolitan Tikhon:

The ruling does not change the teaching of the Church, but it does remind us of the need to be Christ-like in our dealings with everyone. The state has the responsibility to enact laws that protect the rights of each individual. The Church, while it does not bless “same-sex marriages” or view them as sacramental, does see the image of Christ in every individual, and his or her worth in the eyes of the Lord Who died upon the Cross for our salvation.

It concerns me deeply that this has warranted a statement from the OCA, but that neither the OCA nor the GOA could call the violence in Charleston what it was: racism.  Orthodox seem to struggle to speak directly and clearly against the specific factors which create violence.  This statement is a case in point.

An email was recently sent to a number of LGBTQ Orthodox, threatening to “out” gay and lesbian Orthodox, regardless of whether they are in an intimate and sexually active relationship. These “Protectors of Holy Orthodoxy” also threatened to seek out groups that support Orthodox Christians who experience same-sex attraction. This email was apparently read by an Orthodox teenager, who responded, “the thought of being outed to every Orthodox Christian in the world makes me want to die.” Parents of Orthodox LGBTQ teens are afraid for the lives of their children.  I am the parent of an LGBTQ just-out-of-the-teens individual who struggled with thoughts of suicide….

Click here to read the entire article at Women in Theology