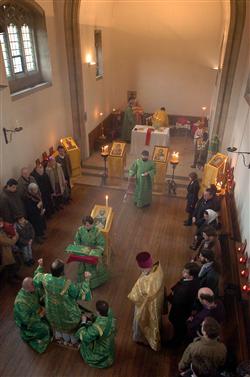 Trainee priests were among the students plunged into crisis when an embittered director of a religious studies institute brought down its distance learning programme, a tribunal heard.

Decorated academic Dr Constantinos Athanasopoulos, who was director of distance learning at The Institute For Orthodox Christian Studies (IOCS), pulled the plug on the online course after he was made redundant, the Bury St Edmunds hearing was told.

The night before the system crashed on August 4 last year he allegedly told IOCS’ chairman of board of directors Gladys Bland he could “bring down the distance learning programme in five minutes” adding she would have “25 very angry students knocking at her door”. Some of those students needed the qualification before becoming a priest.

But despite having reasonable grounds for sacking Dr Athanasopoulos for gross misconduct, which the tribunal found created a “severe and very serious situation” for his employers, he was awarded compensation for unfair dismissal because they did not follow proper procedures.

The institute’s principal Professor David Frost, a former fellow of St John’s College, Cambridge, said they were “besieged with students emailing and telephoning from all over the world” wanting to know what was happening to the system, which he said was down for two weeks.

He told the News: “These were highly-qualified students, some of them needing the course for professional development. One at least needed to take it if an Orthodox bishop was to accept him as a priest. The disruption threatened to destroy highly-valued programmes for which students had paid good money, leaving them with no qualification or means of continuing their studies.”

The IOCS is a full member of the Cambridge Theological Federation and an “allied institution” of Cambridge University and was founded in 1999 with the “blessing of all Orthodox hierarchs in Western Europe”, according to its website.

On the judgment, Dr Athanasopoulos told the News: “The judge has decided that IOCS has denied the most basic natural human right in my case, which is to be called to answer to accusations before the act of dismissal.

“I am still in discussion with my lawyer about what to do in relation to the ET decision, but I still consider the dismissal wrongful and uncalled for.”

Giving his verdict at the tribunal at the end of last month Employment Judge Robin Postle said the IOCS had reasonable grounds for dismissal, but did not follow the correct procedures.

He said the employers fell down when they sacked Dr Athanasopoulos without inviting him to a disciplinary hearing to respond to charges.
The tribunal told his employers to pay the claimant £4,078 for procedural unfair dismissal.

A Cambridge University spokesman said the IOCS is “not part of the university”.