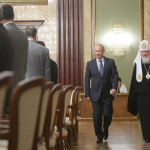 Prime Minister Vladimir V. Putin with Patriarch Kirill I, leader of the Russian Orthodox Church, in May.

MOSCOW — Among the thousands of Russian voices raised against the Kremlin this month after parliamentary elections widely dismissed as fraudulent, perhaps the most surprising was that of Patriarch Kirill I, the leader of the Russian Orthodox Church, who defended popular protests as a “lawful negative reaction” to corruption.

Always a reliable pillar of support for the government of Prime Minister Vladimir V. Putin and his United Russia Party, the powerful Orthodox Church has been noticeably — to some, shockingly — critical of the elections. Arguably the only major national institution outside the state, the church could potentially play a significant role as the current political and social crisis unfolds.

Patriarch Kirill is by no means the only religious critic of the government since the elections, and certainly not the toughest. “People of the most varied convictions are now gathering on the square, but they are united by one thing, their unwillingness to live like this any longer,” Archpriest Aleksei Uminsky, a popular Moscow priest who hosts a television program about Orthodoxy, said at a public gathering last week. “The same thing is happening right now in the church.”

In addition to urging the church to invite serious discussion about Russian society, Father Uminsky called attention to injustices within the church ranks. He cited the case of a priest who died of a heart attack while fighting to preserve church property from Kremlin-backed development plans. “There was no reaction” from any church leaders in that case and other disturbing episodes, he noted, “but something is brewing inside.”

Another prominent Moscow priest, the Rev. Andrei Zuevsky, posted a sermon on his Facebook page last weekend that sharply criticized the existing order, and was quickly circulated on blogs.

“As a result of the particular way in which power is set up in our society today, this arrogant attitude toward the people has become the abnormal norm,” Father Zuevsky said. “Those in power are not only haughty, they refuse anyone but themselves the right to decide what is good and what is bad.”

The criticism has grown so heated that Patriarch Kirill, keenly aware of the church’s continuing dependence on the state, has felt compelled to warn priests to watch their Internet tongues, saying, “Careless and sometimes intentionally provocative statements by priests cast a shadow on all of God’s church.”

Yet the patriarch, known for mixing tradition with enough modernity to keep himself and his church relevant, condemned neither the Internet nor the right to criticism voiced by priests, monks, nuns and even bishops now blogging and posting on Facebook. Every new parish in Moscow, he has said, should keep in step with the times, accessible to young people and with a home page.

Those comments, at a diocesan assembly on Friday, followed both the statement last week in which Patriarch Kirill upheld the right to protest and sermons on Dec. 17 and 18 in which he urged the government to heed popular anger.

At the same time, alluding to the 1917 Bolshevik Revolution and the Communists’ near-destruction of the church, he warned of the dangers of revolution in Russia and of the Internet in manipulating the masses, and stressed that all Russians must work on personal transformation in order for society to change. “We no longer have the right to be divided,” he said, calling for a broad civic dialogue. “The blood that was shed in the 20th century does not give us that right.”

Particularly striking since the elections have been statements by priests, including those of Father Uminsky, published by Pravmir, a Russian Orthodox news Web site. Patriarch Kirill — while lauding official steps, like President Dmitri A. Medvedev’s recent appointments of hard-liners to high government positions, or his promises of change — went out of his way to praise Pravmir’s coverage of the church and society.

The Rev. Dmitri Sverdlov, a young priest who used to work in finance, drew a broad audience and the admiration of secular liberals often cynical about the church with his account of volunteering as an election observer at a Moscow polling place and seeing ballot stuffing in favor of United Russia.

The diocesan assembly has since forbidden priests to act without authorization as election observers, and has warned that it is “extremely dangerous” for clerics to violate the overall church rule against participating in election campaigns.

Yet Pravmir and the recent involvement of the church in the discussions about the elections have surprised secular Russians. Dmitri Gubin, a journalist and avowed atheist who had said the silence of the church hierarchy was leading him to regard the Russian Orthodox Church as a branch of the state, said he was “dumbfounded.”

“For the first time in Russia, I got a clear religious view on a secular problem,” he wrote in Ogonyok, a newsmagazine.

Andrei Zubov, a historian who has studied Russian church-state relations, said the Russian Orthodox Church today had modeled itself on the Kremlin — “The church is building approximately the same kind of authoritarian system as has been built by today’s regime” — and yet was gaining legitimacy as the Kremlin lost ground.

This, he contended, enables Patriarch Kirill to appear as a voice of moderation, a position most likely encouraged by the authorities.

“His declarations are taking on more and more the tonality of a high moderator, who can, he thinks, still calm down the situation, which is headed otherwise to a complete split of society from the regime, and, correspondingly, towards profound political crisis,” Mr. Zubov said.

Archpriest Vsevolod Chaplin, chairman of the Moscow patriarchate’s department on church and society relations, has said recently that he was meeting regularly with representatives of various political parties, including the Communist Party.

Father Chaplin, a controversial figure who hews publicly to government policy yet also frequents a Moscow club known for indie music and alcohol-fueled debates, said there were now Orthodox believers among the Communists, who are No. 2 among the officially sanctioned political parties in Russia, after United Russia.

For now, the church is avoiding unsanctioned political parties. “So far, the radical opposition has not come to us with proposals to facilitate a dialogue with the authorities,” Father Chaplin said in an interview. “A dialogue is needed of course.”

The patriarch and Father Chaplin have stressed that the Russian divide is not just between the Kremlin and those in the streets, arguing that dialogue must include everyone: the elite, workers and peasants, liberals and conservatives, officers and soldiers, and the creative intelligentsia.