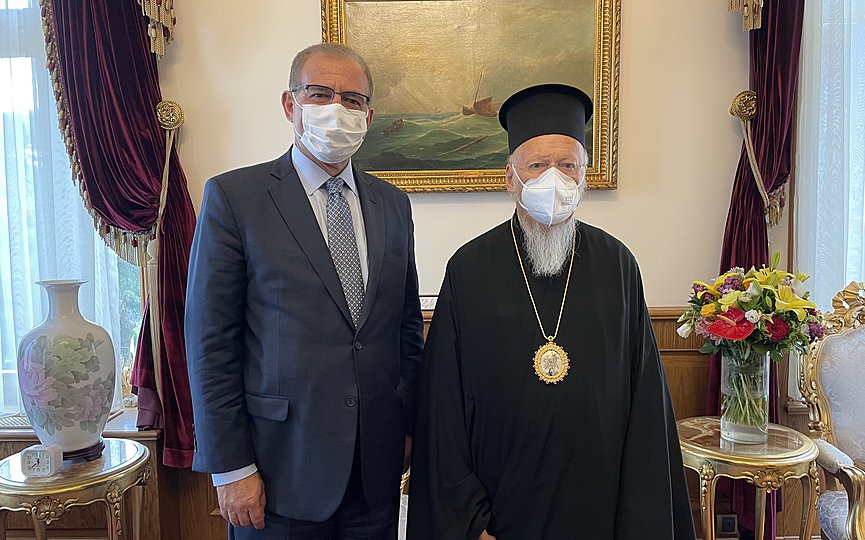 Antonis Diamataris had a private meeting with His All Holiness Ecumenical Patriarch Bartholomew at the latter’s office on Saturday, June 12.

CONSTANTINOPLE – His All-Holiness Ecumenical Patriarch Bartholomew celebrated his name day on June 11 at the Patriarchal Church of St. George in Constantinople. In his homily he said among other things that, “from this Martyr Throne, we feel the sacred obligation urgently as we minister the affairs of the Holy Church by means of our works and words, through the special responsibilities which the sanctified action and the theoretical approach of the Holy Fathers entrusted to us, specifically to Constantinople.”

“We have, and we recognize that we have, a unique responsibility to the Orthodox as the Archbishop of Constantinople. There are those who considered them as privileges for this purpose and envied the apparent glory of the resurrection, ignoring the Golgotha of the service of the Truth at any cost. We do not enter into a dialogue about what is self-evident and traditional. We do not negotiate the responsibilities of our Throne. We do not relinquish them. We do not dismiss them. We will not allow the rejection of blessed ecclesiology as it is clearly described in the texts of our history. 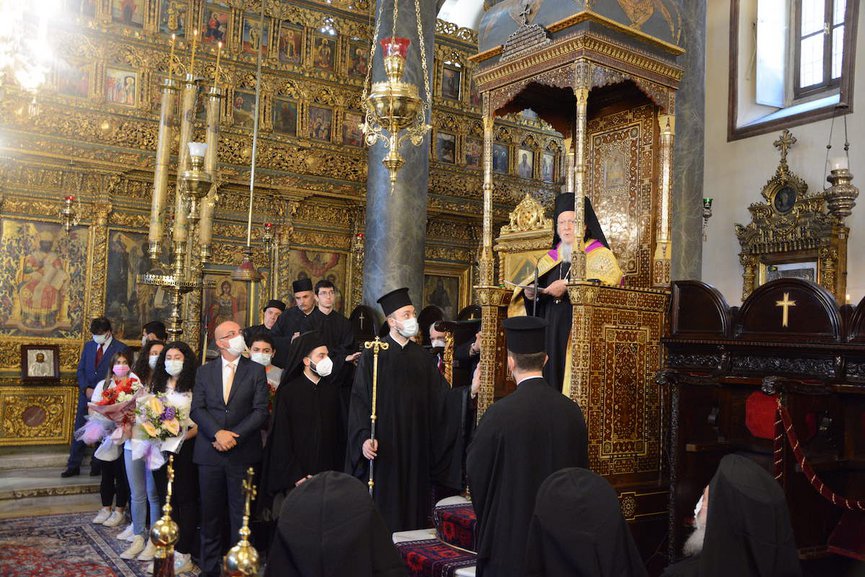 His All Holiness Ecumenical Patriarch Bartholomew delivers his dynamic homily about the Ecumenical Throne in the Patriarchal Church on his name day.

“We will not allow condescension, economy, courtesy, a few friendly concessions, the energies of the last century, in which, unfortunately, some of those before us proceeded, with the dream of a unity, but one that was far from the authentic and ancient ecclesiology. We will not allow them to overthrow what God’s Providence has constructed for the Throne of Constantinople. Constantinople equals sacrifice, responsibility, unwavering self-giving, not, however, an object in the passing interests and opportunistic dispositions of every historical circumstance.

Also present along with hierarchs and officials of the Greek government were faithful from the City and pilgrims from abroad and the Patriarch thanked all those who were present on his name day:

“We truly thank you from the bottom of our hearts for your gentle and friendly attendance and prayer on our name day, for your honor and love for the person of your celebrating Ecumenical Patriarch. We reciprocate by embracing the brethren and blessing the children.

“We particularly thank you, most Reverend and venerable Metropolitan Emmanuel of Chalcedon, for the fully noble sentiments in your address and on this occasion, we express also our congratulations for your recent unanimous ascension to the throne of the historic Gerontic Metropolis of Chalcedon.

“We also address our patriarchal thanks to our Patriarchal Court, for which we boast in the Lord, both for the participation of its members in the joy of the name day of the Hegumen of the Monastery of their repentance, and for their faithful and prosperous ministry. After the unjust suspension of the operation of the nourishing Halki School, to fill the gaps, we invited new clerics, suitable to serve, from various Eparchies of the Throne, some of whom gradually rose in the ranks of the ecclesiastical hierarchy. They became fellow administrators of the Mother Church and, when the fullness of time came, they handed over the baton to their successors – and the life of the Church continues. The divine kindness of the crucified Great Church of Christ continues. 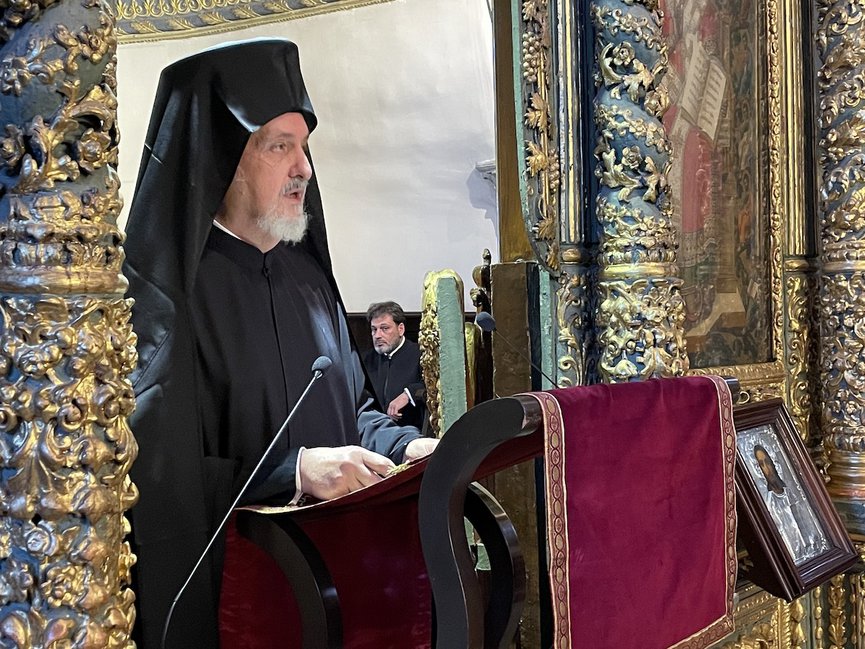 His Eminence Metropolitan Geron Emmanuel of Chalcedon address His All Holiness Ecumenical Patriarch Bartholomew on his name day.

“’Living organisms do not die. They are being transformed.’ And the Church, as such, is also called to transform the world.

“We bless with thanksgiving our children of light here, the little flock which surrounds and through its prayers supports its Patriarch in his heartfelt care for all the Churches.”

Good wishes to His All-Holiness were expressed, in writing and by telephone, by primates of churches, heads of state, prime ministers and political leaders, ministers, hierarchs, religious ministers, and many others, along with those of many believers of all nationalities from all over the world.

The evening before Patriarch Bartholomew presided over the Great Vespers for the Synaxis of the Virgin Mary `Axion Estin’ and the Feast of the Holy Apostles Bartholomew and Barnabas at the Monastery of Zoodochos Pigi in Baloukli.

Afterwards, the Ecumenical Patriarch bestowed the offikion of Archon Nomodotis of the Ecumenical Throne upon Panagiotis Ladas, Emeritus Professor of the Law School of the Aristotle University of Thessaloniki. In his speech, the Patriarch praised the personality, the scientific excellence and the academic career of the honored professor, and added, “the Archons has contributed significantly to the Church and the Nation, and today continue their ministry through their two brotherhoods, the global one under the name `Panagia the Pammakaristos,’ to which you now belong, and the Order of St. Andrew, Archons of the Ecumenical Patriarchate in America. 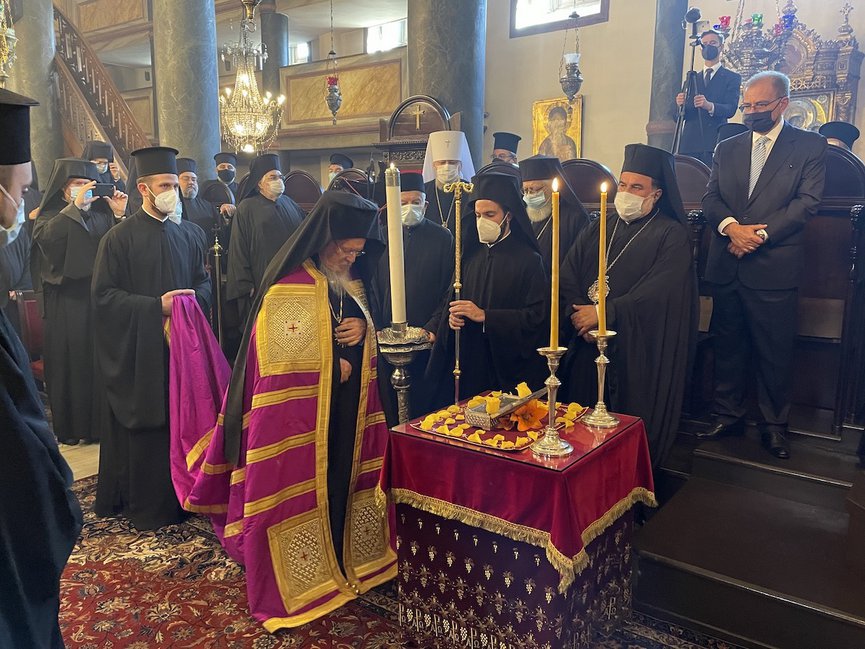 From the celebration of the name day of Patriarch Bartholomew in the Patriarchal Church of St George. The Patriarch is venerating a piece of the Holy relic of St. Bartholomew the Apostle. Shown is Antonis Diamataris at the dignitaries section.

Among the well-wishers was Antonis Diamataris, Advisor to the Publisher of The National Herald. During his visit to Constantinople he had a private meeting with His All Holiness Ecumenical Patriarch Bartholomew at his office on June 12. The meeting took place in a warm and cordial atmosphere in which they discussed current ecclesiastical issues, as well as the Patriarchal visit to the United States in October, 2021. Diamataris invited His All Holiness to visit the Main Offices of The National Herald in New York.