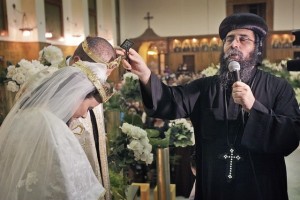 In this 2010 photo, a Coptic priest weds a couple at the Virgin Mary Coptic Church on the island of Zamalek in Cairo, Egypt. Ben Curtis/AP Photo

CAIRO // Ramy Iskander, a 38-year-old Evangelical Christian, spent most of his thirties going from one court to the next, looking to get a divorce.

His now ex-wife was the one to ask for the separation nearly nine years ago, and Mr Iskander agreed, but Egypt’s strict laws on civil matters meant that getting the legal approval was no easy task.

“I was born a free human being, and so I should be free to choose who I marry and divorce based on civil laws, not on the interpretations of a religious text by another human being,” said Mr Iskander, who requested a name change due to the sensitive nature of the topic.

Divorce is a lengthy and complicated process for Egypt’s Christians, who make up 10 per cent of the country’s 85 million population.

Under the constitution, Christian couples must seek approval for divorce from both the state and their individual church. This means that while couples may be given a divorce by Egypt’s state courts, they will not be able to remarry unless their church also gives its approval.

This leaves thousands of couples, referred to in Egypt as “hanging Christians”, waiting for their divorce to be approved either by the church or the state.

A state court initially denied Mr Iskander his divorce due to a psychological disorder from which he was suffering. Further attempts failed until a sympathetic judge finally approved the couple a divorce last year, based on proof that Mr Iskander’s ex-wife was actually baptised as Coptic Orthodox. This was despite the fact that she prayed and was married in the Evangelical church.

Egypt’s laws on marriage and divorce are based on Sharia, which is the main source of all legislation in the country’s state courts, as outlined by the 2014 constitution.

Under Sharia, conflicting religious denominations are grounds enough for divorce. It will also be granted in cases of adultery — but only if four witnesses are willing to testify.

Muslim couples do not face so many obstacles because state law on civil matters such as marriage and divorce is already based on their religion’s laws. Therefore they only have one layer to go through, just the state, whereas Christians have both the state and their church.

Unfortunately for unhappily married Christians, however, church laws on divorce are very restrictive.

At present, most Christian couples wanting a divorce in which adultery is not a factor have to either fabricate an adultery claim or convert.

But some Egyptians are trying to change all this.

A new Facebook group, which was set up by the post-revolution Right to Live movement with more than 25,400 likes, is calling for civil marriage in Egypt so that Christians are no longer subject to the churches’ restrictive laws on divorce. Instead, they would only need to seek approval in accordance with Egypt’s state laws — just like the country’s Muslims, as well as Christians who marry non-Egyptians.

Many of those awaiting a divorce are pinning their hopes on the government’s newly proposed “personal status” law that sets out new marriage rules for Christian couples.

But these rules are being moulded in consultation with Egypt’s churches and the final draft may not satisfy those, like the Right to Live movement, who are calling for civil marriage.

An initial draft of the law did include a clause permitting civil marriage for Christians.

However, a leaked version published by Al Watan newspaper in December, reveals that it has since been amended by five of Egypt’s Christian sects — the Coptic Orthodox Church, which makes up an estimated 95 per cent of the country’s Christian community, and the smaller Catholic, Evangelical, Roman Orthodox and Episcopal denominations. The civil marriage clause has now been removed. Other sects, such as the Protestants and Armenians, were not consulted.

“The church prayers with all their rituals represent the marriage, then it takes a legal cover through documentation, that is civil marriage, which cannot precede marriage and is not recognised,” the Coptic Church’s head, Pope Tawadros II, told the state-run weekly newspaper, Ahram Hebdo.

Under the leaked version of the draft, Christians will still be able to get a divorce where both parties seek it and where adultery has been committed – so long as this is permitted by their individual churches.

The draft also proposes new grounds for divorce when a husband or wife is tempted into adultery due to the couple being separated for three or more years.

Egypt’s churches argue that civil marriage would be unconstitutional because Article 3 of the Egyptian constitution states that the principles of Christian legislation are the “main source of legislation” for their personal status affairs.

Rights activists say that it might be the main source but it is not the only source, however.

“We have put forward a request to the presidency and the constitutional court for an explanation of Article 3 of the constitution,” said Nader El Serafi, spokesman for the Copts 38 movement that was formed after the 2011 uprising and demands a return to the Coptic Orthodox Church’s 1938 bylaw that permits divorce under nine conditions. These include attempted murder, a prison sentence of seven years, abandonment for five years, sexual dysfunction and irreconcilable differences among others.

The Egyptian government has been keen to show unity — at least symbolically — with the country’s Christians, an often-marginalised community. Last week, President Abdel Fattah El Sisi became the first Egyptian president to ever visit the Coptic Cathedral on Coptic Christmas Eve.

But the state is conflicted on permitting civil marriage, says Ishak Ibrahim, a researcher at the Cairo-based human rights group, Egyptian Initiative for Personal Rights.

“The state is in a conundrum,” Mr Ibrahim said. “It wants to give something to the Copts and the church for their support on and after [the toppling of former president, Mohammed Morsi], and so that it can appear as a democratic state, but how does it keep the marriage portfolio in its hands without angering the church?”

The draft law has now been sent to the government either for presidential approval or to be discussed when the next parliament is elected this March and April, and Mr El Serafi remains hopeful that there will be an opportunity for the wider society to have an input.

Rafeek Farouk, one of the founders of the Copts 38 movement, is unsure whether the government will ultimately prove brave enough to take on the churches over civil marriage, however.

“I think the state wants to resolve the problem from its root,” he said. “But will the state have the courage at the moment to say officially that civil marriage is open for all Egyptians? God knows.”