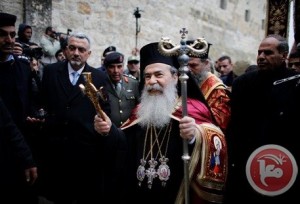 Patriarch Theophilos arriving in Manger Square during Christmas in 2013

By Alex Shams
BETHLEHEM (Ma’an) — Christmas is a time for holiday cheer in Bethlehem, as thousands from across Palestine and around the world converge to celebrate the birth of Jesus Christ in the hilltop West Bank city.

Onlookers at the Orthodox Christmas parade on Jan. 6 this year, however, were surprised to find protesters awaiting the traditional visit of the Patriarch to Nativity Church, and six youths were even arrested after chanting slogans against him in Manger Square.

For those participating in the rally, it was the visit of Jerusalem Patriarch Theophilos III — not their protests — that had ruined Christmas.

“I came here to celebrate the birth of the Messiah, Jesus Christ, in my way as an Arab Orthodox (Christian),” Jalal Barham, a member of the Follow-up Committee of the Arab Orthodox High Council in Beit Sahour told Ma’an at a protest greeting the church leader at Bethlehem’s Catholic Action Circle. 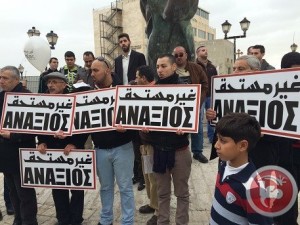 “My celebration would not be complete if it did not include expressing my opposition to the illegitimate (Patriarch).”

The protest was part of a growing campaign in Palestine and Jordan loosely organized under the slogan: “Gheyr Mostaheq/Anaksios,” meaning “illegitimate” in Arabic and Greek respectively.

Supporters of the campaign accuse the Patriarchate — reportedly the second-largest landowner in Jerusalem — of selling off large amounts of land to Israeli authorities through long-term leases.

They have brought forth documents purporting to show that parts of Jewish-only settlements in the Jerusalem area have been built atop these lands, and in the past few years a number of scandals have erupted as details emerged of sales in West Jerusalem neighborhoods as well.

Angered at what they say is the Orthodox Church’s increasing collaboration with the Israeli occupation, dozens have joined the grassroots movement aimed at creating change by disrupting the Patriarch’s public appearances.

“He is illegitimate in entering the Nativity Church, where Jesus was born and from which the message of Christ emerged,” Barham told Ma’an. “We announce in all truthfulness that Theophilos is illegitimate unless he returns to the teachings of Jesus in defending this Holy Land and not selling it off to the Israelis.”

The campaign has stirred strong emotions among the 200,000-strong Orthodox faithful in the Holy Land — including Palestine and Jordan, which are both part of the Patriarch’s realm — raising larger questions of identity and resistance for a community struggling to survive in the face of an occupation stretching back nearly 70 years.

Movement 500 years in the making

The Gheyr Mostaheq campaign traces its roots back at least a decade, with a major victory for those opposed to Orthodox land sales to Israel coming in 2005. In that year, former Patriarch Irenaeus was ousted from his seat as part of a backlash against land sales he reportedly made to Jewish settler groups in the Old City.

Activists say that while Patriarch Theophilos initially resisted pressures to continue such transactions, within a few years he began offering long-term leases in a number of areas for settlement construction.

These included parts of Har Homa, a mountain previously part of Bethlehem but now host to hundreds of white towers housing Jews exclusively, as well as the area of Givat Ha-Matos, where Israeli authorities plan to build another Jewish-only area settlement that would irrevocably sever the road between Bethlehem and Jerusalem’s Old City and make a contiguous Palestinian state housing both an impossibility.

Protests against the Patriarch have been growing for years, but activists hope that the launching of a new, focused campaign will strengthen the movement.

Majd Salsa, a Beit Sahour native and supporter of the Gheyr Mostaheq movement, argues that these land sales are not only unethical and betrayals of the Palestinian cause, they are also a direct affront to the Greek Orthodox faithful who transferred the lands into Church hands for protection.

“During the Ottoman times our ancestors gave their lands to the Patriarch so they wouldn’t have to pay extra taxes, in full trust that the Patriarch would later return the lands. They believed he would protect the lands and keep them as a Christian waqf,” using the Arabic term for religious endowment.

But for Salsa, the land issue is only one part of a struggle that he says began 500 centuries ago, when Ottoman authorities handed custodianship of the Jerusalem Patriarch to a religious committee composed exclusively of Greeks, the Brotherhood of the Holy Sepulcher.

This Brotherhood controls Orthodox holy places across the Holy Land and chooses the Patriarch, but is run almost entirely without local Palestinian or Jordanian input.

“The Greek authorities completely ignore all of the demands of the (Arab) Orthodox, and they refuse to discuss the topic with anyone, instead acting with racism and condescension toward us as if they were speaking to people below them,” Salsa told Ma’an. “But it is the Arab Christians whose land this originally is. It is their church and they are the ones who started it 2,000 years ago.”

“We don’t need spiritual leadership above us from abroad,” he continued. “Prior to the Ottomans we had Arab patriarchs ruling over us, including the one who welcomed (Muslim conqueror) Omar ibn al-Khattab,” he said, noting that other Greek Orthodox churches in the Middle East were also ruled over by local leadership.

The office of the Greek Patriarchate, however, has so far shown no signs of giving ground on Arabization of church leadership, and denies any wrongdoing over land sales. 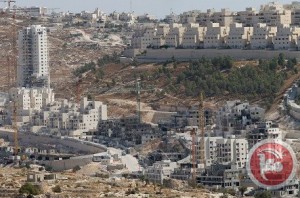 General view over the Israeli settlement of Har Homa

‘An agenda developed by outsiders’

Issa Musleh, the Patriarch’s spokesman and a Beit Sahour native as well, dismissed the movement against the Church as “chaos and problems” that had begun only a few months before over a controversy that erupted over the changing of a priest’s responsibilities in Jordan to one in Palestine.

He accused Archimandrite Christophoros, previously the head of a monastery in Dibeen in northern Jordan, of “slandering” the Church in the media and making dishonest statements, after which he was dismissed.

Musleh told Ma’an that after the dismissal, activists came to Palestine to stir up problems in the holiday season, adding: “Both Christian and Muslim holidays are national holidays and no one is allowed to do anything to tarnish the positive image that befits our precious nation of Palestine and especially the city of Bethlehem.”

Musleh also slammed accusations that the Church discriminated against Arabs in leadership positions, stressing that both Greeks and Arab were Orthodox and that there should be no distinctions between them.

He did however highlight that there were not enough Arab priests ready to lead the church at the current time, adding that in his opinion in Arab culture there was an emphasis on having children and getting married that made it difficult for locals to ascend to the position of Patriarch, which requires celibacy.

“Unfortunately from time to time some people try to call for Arab leadership and to Arabize the church. They should first respect the church laws and sacrifice for the church. And as you know we do not have a state to choose an Arab Patriarch,” he added, pointing to Palestine’s continued occupation by Israel.

Musleh also flatly denied accusations of collaboration with or land sale to the Israeli government.

“Find me a piece of paper that proves that the Patriarchate or the Holy Brotherhood of the Holy Sepulcher sold or leased land to the Israeli occupation,” Musleh told Ma’an. He pointed to the Church’s close relationship with Jordanian and Palestinian authorities, as well as Islamic religious leaders in Palestine, to highlight the Church’s pro-Palestinian stance.

“The Patriarchs and the heads of the churches are the ones who preserve the Christian existence in the Holy Land in light of the immigration (of local Christians) because of the economic and political situation, the separation wall, and the Israeli checkpoints. We have become less than 1 percent (of the population) in this country. The number of Christians in Jerusalem is between 10,000-11,000.”

“Unfortunately, some people want to use the Greek Orthodox Patriarchate’s properties and there is a specific agenda developed by outsiders who are playing this game. But we will confront them and stop them because we will not allow such a situation,” he told Ma’an.

“We Christians and Muslims should be united to fight for and free our land and establish an independent Palestinian State, and we should support the Palestinian and Jordanian governments’ efforts for our just cause,” he added.

“But there are some outsiders who want to destroy the Greek Orthodox Patriarchate. We tell them that the Church has a Lord who sacrificed his life on the cross and said that evil will not defeat us. We will remain despite the difficulties we are passing through these days.”

Majd Salsa, the campaign supporter, told Ma’an that he was not convinced by the arguments made by church officials.

He said that he had tried repeatedly to gain an audience with the Patriarch to no avail, and it was this experience — and that of others like him, including Arab priests inside the Church — that had forced the group to take the protests to the streets during Christmas.

Although Salsa was hopeful about the prospects for change and “renaissance” within the Church, he also expressed fears that the movement was caught in a political game between Palestinian and Jordanian authorities on one side and the Greek state on the other.

“The biggest problem is the collusion of Palestinian and Jordanian authorities on this issue. They consider any attack on the Patriarch unwelcome because they don’t want problems with Greece, which generally has a supportive position toward the Palestinian state. They don’t want to hurt those ties.”

“The Greek state supports the Patriarch, and the fact that they have control over the Jerusalem Patriarchate … this is a source of power for them.”

“If the (civil authorities) stand with the people they belong to, with the church membership in Jordan and Palestine, we can achieve our demands easily,” he told Ma’an. “But if they stand as police or an army against our movement, we cannot.”

Authorities have not yet signaled any clear position on the movement, which organizers have thus far taken as a sign of their support for the Patriarchate.

The arrests of six activists during the protest on Orthodox Christmas — as well as an incident this reporter witnessed where a man who appeared to belong to the Palestinian secret services threatened a protester and confined him to a nearby building under police guard — suggest that they may be right.

For Salsa, the incidents suggest a worrying future for the campaign.

“If the Patriarch is a patriarch for the mother of all churches in Jerusalem, and he asks for the violent protection of the police and intelligence services and army from his own people — the people of his own church, the people who own the lands that he is selling — what kind of Patriarch is this?”