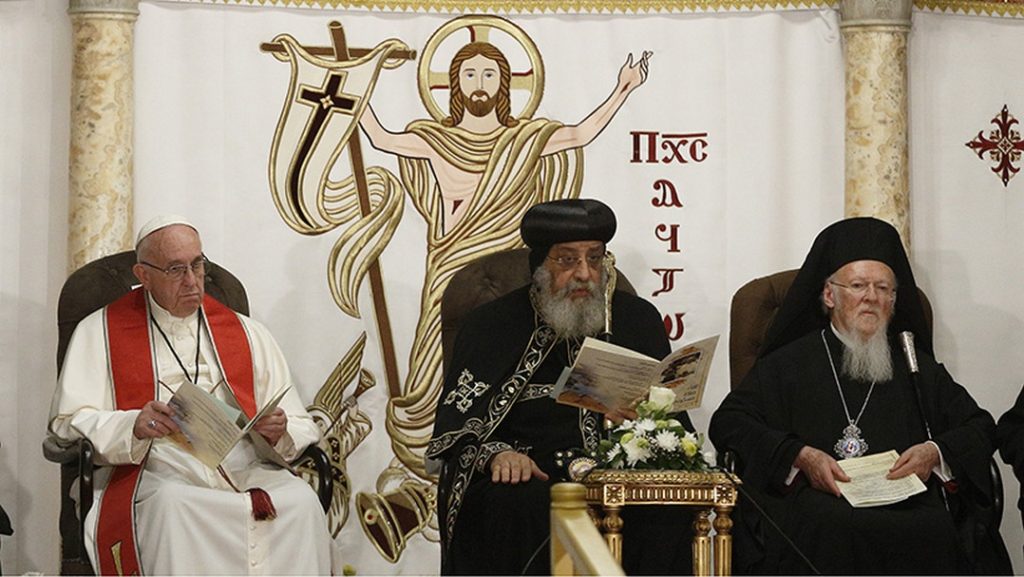 Pope Francis, Coptic Orthodox Pope Tawadros II and Ecumenical Patriarch Bartholomew, spiritual head of the Orthodox churches, attend an ecumenical prayer service at the Church of St. Peter in Cairo April 28, 2017. Ecumenical Patriarch Bartholomew of Constantinople plans to grant independence to Christians in the Ukraine, many of whom have been linked to the Russian Orthodox Church Moscow Patriarchate.(CNS photo/Paul Haring)

When he traveled to the southern Italian city of Bari in Puglia on July 7, to attend the unprecedented ecumenical meeting summoned by Pope Francis, his holiness Pope Tawadros II represented the largest Christian Church for the entire Middle East. Yet, the number of Christians in the Middle East has plummeted.

It was “a very successful meeting,” said the highest-ranking leader of the Coptic Orthodox Church of Egypt, “a great opportunity for Church leaders to meet and to pray together, asking the King of peace to grant us His peace.”

That encounter promoted by Pope Francis in Bari (where the relics of St. Nicholas are venerated both by Catholics and Orthodox) was aimed to gather the leaders of all the Middle East Christian denominations, in order to discuss the “dark clouds” covering the Middle East, as Pope Francis named its tragedies of violence, destruction, fundamentalism and forced migration.

“The Middle East,” Pope Francis stated, “has become a land of people who leave their own lands behind.” And referring to the danger that the Christian faith will disappear, he warned: “a Middle East without Christians would not be the Middle East.”

Tawadros II, 65, has been Pope of Alexandria since 2012. The Coptic Orthodox Church is one of the most ancient Churches in the world, founded in Egypt by St. Mark the Apostle and Evangelist. It has the largest Christian presence in the Middle East, roughly 10-15 million members in Egypt, about 15 percent of the population.

With regard to the delicate issue of the cohabitation with the Islamic majority, Tawadros II recognizes that “the large segment of Egyptians has a positive vision towards the future. After the 2013 revolution we see an improvement in the status of Christian Egyptians, and we hope for more improvements.”

The Coptic Orthodox Church has also experienced rapid growth over the past 30 years in the United Kingdom, Europe, North America and Australia.

In September, Tawadros II presided over the Holy Mass for the inauguration of Queen Helena Church in New York and spoke with Our Sunday Visitor:

Our Sunday Visitor: Your holiness, the encounter in Bari on July 7 with Pope Francis and the leaders of all the Christian Churches of the Middle East was an unprecedented event. What are your impressions? How will that event be remembered?

Pope Tawadros II: It was an enjoyable spiritual meeting, in which the spirit of Christian love prevailed. The meeting was very successful and a great opportunity for Church leaders to meet and pray together asking the King of Peace to grant us his peace.

OSV: Why was the ecumenical encounter useful?

Tawadros II: Meeting our beloved brothers, Church leaders, and our discussions about our Churches in the Middle East and how to best reach social peace was indeed helpful. The exchange of experience and raised suggestions was a great and useful opportunity for our service.

OSV: There are many very complex problems Middle East Christians face: rights of citizenship denied, intolerance, violence, emigration. How do these problems touch Egypt in particular?

Tawadros II: We thank our Lord; national unity in Egypt and between all Egyptians is a strong unity with deep roots in history. Accordingly, any arising problems we try to solve in the spirit of one family.

OSV: In addition to the intolerance, Christian in Egypt have suffered very bloody attacks, in the churches for example. Are unsafety and violence a serious risk too, today, for Egyptian Christian people?

Tawadros II: Violence and terrorism have been prevalent in the world for a long time and we have deeply suffered from it in Egypt. The terrorist attacks we faced were not just against churches but against many other entities, with the aim to destroy our national unity, and this we are aware of. Egypt is fighting terrorism and through the army they are leading a war against places of terror especially in Sinai, and to a great extent they have succeeded.

OSV: The visit of Pope Francis to Egypt and the meeting with the great Imam Al Tayeb at the University of Al Ahzar in Cairo drew very positive impressions. After that meeting what happened in concrete terms in the relations between Christians and Muslims? Has something changed?

Tawadros II: The visit of his holiness Pope Francis to Egypt was a great blessing for all Egyptians, and undoubtedly a good influence on the relations between Christians and Muslims. We meet frequently with the Grand Imam Al Tayeb in social and religious events and until today we recall with joy this visit.

OSV: But the people who crowd your churches, do they still believe in a different future for Egypt? A future of peaceful coexistence between religions?

Tawadros II: The large segment of Egyptians has a positive vision toward the future. After the 2013 revolution, we see an improvement in the status of Christian Egyptians, and we hope for more improvements. For example, it’s for the first time that a Coptic woman was appointed as a governor, this in addition to another Christian governor appointed in one of the Delta governorates.

OSV: With the emigration in recent years, very large communities of Coptic Christians have been formed outside of Egypt. How will it be possible for them not to lose their cultural and religious roots in countries and societies very different from Egypt?

Tawadros II: Our Coptic Orthodox Churches are spread over 60 countries worldwide, through the pastoral care provided in our churches, we can maintain the Coptic traditions and values. Furthermore, there are ongoing connections and visits between the immigrants and the mother church in Egypt. Lately, we have held a large conference “Returning to the roots” with the participation of around 200 youth from the second generation in our churches abroad.

OSV: How do you evaluate the relationship between the Copts and Catholics? Do you foresee upcoming concrete steps on the ecumenical path?