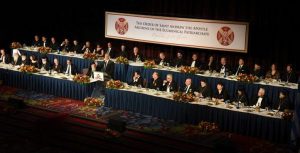 The fact that the Orthodox Church is fragmented and operates without centralized control is well known. The Holy and Great Pan-Orthodox Council held last year in Crete provided ample proof.

The Orthodox Church is a consortium of 14 Autocephalous (self- governing) Churches. Each operates independently of the others, but remains in full communion with them on matters of faith, sacraments, and canonical discipline. Governance in each case is by a Primate, selected by the Church’s Synod of Bishops. There is no “head” as such of the Orthodox Church to whom he and the other Primates of the Autocephalous Churches must report.

Because of the advantages autocephaly offered, it became the preferred form of church administration in the Orthodox East from the earliest of times. Autocephaly allowed persons of similar ethnic background to organize their churches, retain their own language in religious services, and be administered locally, without the requirement for outside oversight or direction.

It all made sense back then, but it no longer does.

Autocephaly is not responsive to many of today’s challenges. For one, there is no provision in its structure for a “head” of the Orthodox East to coordinate and promulgate the policies and activities of all Autocephalous Churches. The Ecumenical Patriarch currently has no such authority; he is merely the “first among equals” of the Primates of the Autocephalous Churches. In the absence of a “head” of the Church, issues of common concern need to be debated and agreed upon by all 14 Primates before they can be implemented — admittedly an extremely demanding task.

The Orthodox Church has also a huge diaspora problem today – a byproduct of autocephaly – as evidenced by the millions of Orthodox now residing and practicing their Orthodox faith outside the borders of their parent Autocephalous Church, but to which they still belong administratively. Enormous waste in Orthodox infrastructure and clergy resources, worldwide, are the result. Adversely affected also by the absence of an Orthodox Church “head” are the ongoing reconciliation dialogues with Rome and other Christian Churches. Despite the best intentions on both sides, in the absence of someone who can speak with authority for the entire East, results have been meager.

Even among critics of autocephaly, there is no desire currently to replace the present system with a different form of church structure. But the time has come, to alleviate certain major problems inherent in autocephaly that constrain Orthodoxy from fulfilling its worldwide mission.

These problems cannot be confronted, however, until the role of the Ecumenical Patriarch has been dramatically enhanced. The Ecumenical Patriarch needs to be elevated to the rank of “head” of the Orthodox East, with authority to act and speak for the entire Church. He cannot continue being merely one of the Primates in the Orthodox East. Every human activity involving large numbers of people, whether a commercial activity, social organization, or political institution, has a “head”- someone in charge who provides overall direction and control.

So, should also the Orthodox Church. The Ecumenical Patriarch needs to become in fact the “first” Primate throughout the entire Orthodox East, rather than a mere ”first among equals,” which is his present role.

To be able to fulfill effectively his duties as the “head” of the Orthodox Church, the Ecumenical Patriarch will need to be freed of all responsibility for serving also as the Primate of the Church of Constantinople. This responsibility, for administering the Church’s holdings in Turkey, Greece, Western Europe, the United States, and Australia, should be assumed by a senior Hierarch of the Patriarchate, perhaps its Grand Chancellor.

Freed of this burden, the Ecumenical Patriarch would then be able to focus on activities designed to reunify Greek Orthodoxy. One such activity would be the convening annually of a conclave of the Primates of all 14 Autocephalous Churches. Such a body does not currently exist, but needs to be formally activated and serve as the senior policymaking assembly of the Orthodox East. Huge benefits should accrue from such regular meetings of the Orthodox Primates conducted in reverence and understanding.

Will the Primates of the Autocephalous Churches concur in the organizational changes proposed herewith? Only time will tell. Convincing them of the wisdom of the proposed changes will require patience and energy, but they must be persuaded of their need, if the Orthodox Church is to move into the 21st century in unity and purpose.

Orthodox faithful, worldwide, should participate in this regard (the Order of Saint Andrew comes to mind for the United States) by approaching doubting Hierarchs, in love and humility, with the rationale for an Orthodox “head” and the need for a conclave of senior Primates to address and resolve major Pan-Orthodox issues.

Enhancing the role of the Ecumenical Patriarch while also engaging the Primates of all Autocephalous Churches to resolve the major issues confronting Orthodoxy today will not come easy. Both actions will probably require a sustained effort of several years for acceptance. But, with the help of the Holy Spirit, both should come to pass to the benefit of Christ’s Church on earth.

Share. Twitter Facebook Pinterest LinkedIn Tumblr Email
Previous ArticleFINDING YOUR VOICE (Part I): THE AKATHIST HYMN FOR LEADERS
Next Article “To Each is Given the Manifestation of the Spirit for the Common Good (1 Cor 12:7) – Dr. Helen Creticos Theodoropoulos