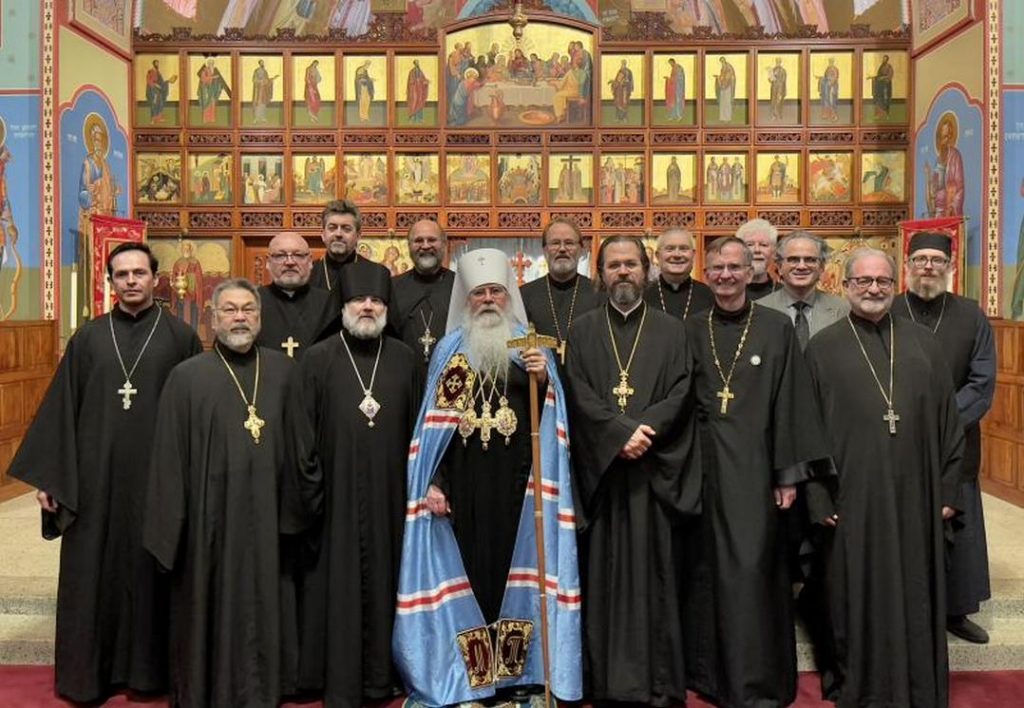 The Holy Synod of Bishops and Metropolitan Council of the Orthodox Church in America convened at the Sheraton Cleveland Airport Hotel in Cleveland, OH for their regular Fall Sessions, respectively on October 21 and October 18-19.

On Wednesday and Thursday, October 20-21, the Holy Synod and the Metropolitan Council also met in an expanded joint meeting which included Diocesan Chancellors, representatives from the three OCA Seminaries, and Monastic Superiors.

Due to the pandemic, the Metropolitan Council met in person for the first time in almost two years. His Beatitude Metropolitan Tikhon opened the meeting with a Moleben on Monday afternoon. During the meeting, reports were received from His Beatitude Metropolitan Tikhon, Archpriest Alexander Rentel, Chancellor, Priest Alessandro Margheritino, Secretary, and Mr. Andrew Smith, Treasurer. A number of other reports were received: the OCA Departments, the All-American Council, the Property Committee, Communications, and Pension Plan, amongst others.

The Metropolitan Council continued its discussion on important issues which included the relocation of the Chancery of the Orthodox Church in America, the sale of Westwood, the relocation of the Archives and the proposals received to the Request for Proposals issued in May 2021, and the work of a special Pension Plan subcommittee of the Metropolitan Council.

The members of the Metropolitan Council were joined by the other participants of the expanded joint meeting on Tuesday night for an evening of fellowship. The 65 attendees rejoiced in the opportunity to gather together after a long hiatus due to the pandemic. Many remarked the critical importance of gathering together in fellowship in a spirit of brotherly Christian love. All look forward to the even greater fellowship which is to take place in Baltimore, MD at the 20th All-American Council on July 18-22, 2022.

On Tuesday night, Archpriest Thomas Soroka, Product Manager for the Departments of the OCA, hosted His Beatitude, Archpriest Alexander, and a few other participants of the joint meeting, at his weekly live show Ancient Faith Today Live to discuss “The Church Working in Council.”

On Wednesday morning, October 20, the Divine Liturgy was served at Saint Mary Romanian Cathedral with the blessing of His Eminence Archbishop Nathaniel. Archpriest Kirill Sokolov, member of the Metropolitan Council and Director of the Diaconal Vocation Program, and Deacon Peter Ilchuk, Council Manager, served the Divine Liturgy with the blessing of Metropolitan Tikhon.

The participants of the joint meeting enjoyed the warm hospitality of the Saint Mary’s parish community and the Cathedral Dean, the Very Reverend Remus Grama. Following the Divine Liturgy, His Beatitude Metropolitan Tikhon delivered an address which was also made available via Facebook Live.

Following Metropolitan Tikhon’s address, the joint meeting began its work in a workshop format. Along with fellowship, this joint meeting was intended to be a platform for the leadership of the Church to discuss and prepare for the upcoming 20th All-American Council. The participants were divided into 8 groups, each with a facilitator. Each group was assigned a topic to discuss over three sessions. The topics and related questions were considered and discussed within the framework of vocation and, particularly, along the theme of the upcoming 20th All-American Council, “Becoming Vessels of Grace.” Several of the topics were inspired by data that is received every year in the Diocesan Reports. The topics were the following: Clerical Vocation, Changing Parish Demographics, Compliance and Implementation, The Place of our Seminaries, Musical Vocation, Youth Ministry, The Diocese of Alaska, and Monastic Vocation.

The groups were tasked with assessing the state of affairs of each vocation but also with finding solutions to the challenges presented by each topic. More specifically, the groups were to discuss what the All-American Council can do to support each vocation.

On Thursday morning, October 21, after three working sessions, each group was asked to present a summary of their discussion to the whole group and address questions that other joint meeting participants may have had. At the end of the session, Priest Alessandro Margheritino, Secretary of the Orthodox Church in America, thanked the entire group on behalf of Metropolitan Tikhon for the hard and diligent work during the workshop.

Inspired by the presentation on the unique reality and challenges of our mother Diocese, the Diocese of Sitka and Alaska, His Beatitude blessed a collection that raised directly from the meeting participants over $7,000 in support of vocations in Alaska.

The expanded joint meeting concluded at noon in a spirit of gratitude and enthusiasm, giving thanks to God for the opportunity to come together and discuss various important aspects of the life of the Orthodox Church in America.

The Holy Synod of Bishops began its 2021 Fall Session on Thursday, October 21 at the conclusion of the joint meeting. Twelve out of the fourteen bishops of the Orthodox Church in America were able to attend in person. The Holy Synod will continue the Fall Session via teleconference over the next few weeks.