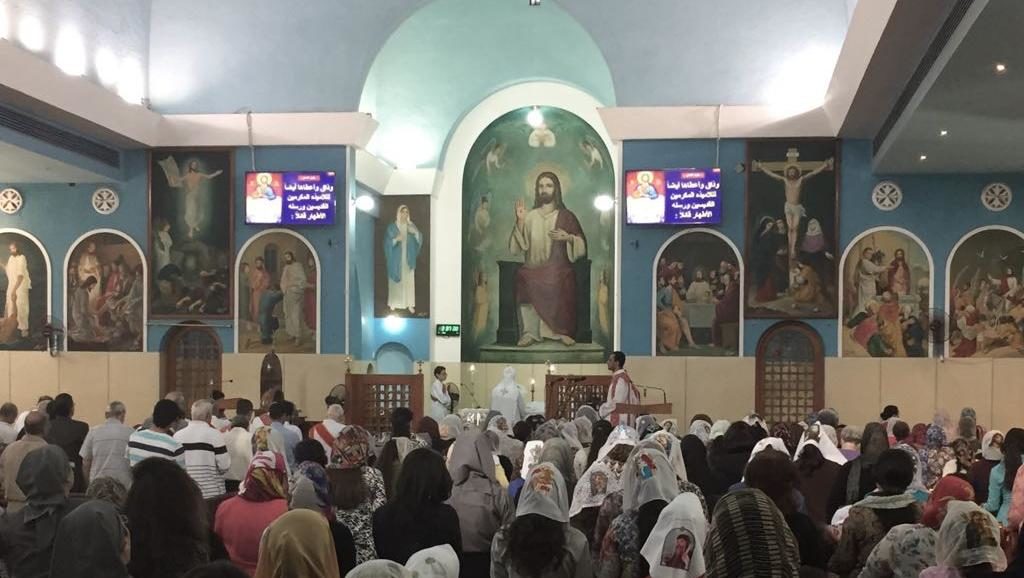 As Egypt’s elections kick off on Monday 26 March for the next three days, Rfi goes to the southern city of Asyut,  which has one of the largest Coptic populations in the country,  to see if efforts by President Abdel Fattah al-Sisi have been effective in ensuring the safety of the Copts after recent terrorist attacks. Photos by Pedro Costas Gomes.

On a hot sunny afternoon, just before the start of the weekend, the three hour mass at the Arch Angel Michael Cathedral in Asyut is packed. The Coptic Orthodox Church plays a central role in keeping the Coptic community connected both religiously and socially. The smell of frankincense mixes with the spring smell in the air as the priest carries burning incense while weaving his way around the men sitting to his right and the women sitting to his left who cover their heads loosely with a shawl.

Asyut is a small city found in the south of Egypt that has one of the highest percentages of Coptic people. In a county with a population of nearly 100 million, the Copts make up 12 percent, and in Asyut they make up about 45 percent. And here in this Cathedral on a Thursday afternoon, the role of the church is as important as ever in maintaining the Coptic community. As the priest gives his sermon, inside the church canteen a few groups of girls are engaged in conversation while young guys check in with their friends. The church isn’t only about mass, but also about ensuring a place for members of the community to interact regularly.

The Copts consider themselves to be the ‘original’ Egyptians given they can trace their history back to the period of the pharaohs. The Coptic language is primarily Pharaonic with some Greek explains Father Boulos Beshay, one of the priests at the Cathedral. Dressed in a black robe with a skull cap, and a typical long beard –a trademark of the Orthodox Church– he is busy shaking hands with all the different ages from his congregation who quickly reach out to give his hand a kiss to receive his blessing.

To enter the cathedral as a non-regular, one must respond to some security questions such as the purpose of the visit and then be screened. It may seem a little excessive, but the Coptic community has been targeted violently since the ousting of former president Mohamed Morsi who was elected as the head of the political party of the Muslim Brotherhood.

During Morsi’s year in power, many within the Coptic community began to feel an increase in religious tensions. But since his ousting and the banning of the Muslim Brotherhood, there has been an escalation in the violent attacks on the community, such as the December 2016 bombing of Saint Mark’s Cathedral in Cairo, followed by the double attack in April of 2017 at St George’s Church in Tanta and St. Mark’s Church in Alexandria, and the recent attack in December 2017 in Helwan of a Coptic owned store and Mar Mina Church. The Islamic State armed group claimed responsibility for the attacks vowing to unleash more against the Coptic community. Many claim that some members of the Brotherhood who escaped arrest regrouped under a more violent branch of the group or joined forces with IS.

When asked if the Copts live in security now since Abdel Fattah al-Sisi became president in 2014, Beshay smiles and looks up: “our god will protect us” he explains. He adds that since July 2013 (when Morsi was ousted from power) they feel more secure than before.

One of the main objectives of Sisi has been securing the support from the Coptic community via its protection. But under Sisi there has been a marked increase in the number of large, organized and deadly attacks. Before, in the southern villages far from the reach of the government, skirmishes have always existed usually being settled by the religious leaders of the area, and not always in a just manner, but never to such deadly or violent proportions.

But Beshay explains that since the Muslim Brotherhood lost power, they have been trying to attack the government via the churches, “to make trouble between the Muslims and Christians” which inevitably creates a problem for the regime.

Even though entering the church now is like going through airport security, the priest explains that similar measures have been in place for twenty years, but admits these days “it is concentrated.”

When asked if the re-election of Sisi may help or deteriorate the security situation for the Copts, Beshay calmly responds, but with an intensity in his eyes: “I can’t know about tomorrow, I know only about today.”

Beshay believes Sisi is someone who has the right approach and considers him to be someone “who can give the people their economic dreams.” But after 30 plus years of mismanagement of the country under former presidents Hosni Mubarak and Anwar Sadat, the soft-spoken priest stresses that Sisi inherited a country of “bad [economic]heritage.” Such an attitude may explain why the Coptic community continues to support Sisi despite the rise in the number of attacks against them and given that there are no other viable options to ensure their security.