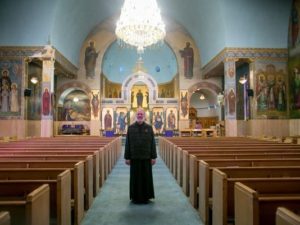 Father Paul Albert says every time they hit a bump, it is challenging to recover. “This is not the first time and may not be the last time.” (Photo: Anthony Lanzilote / Special to The Detroit News)

Detroit — “God willing” is a familiar refrain for those most devoted to Saints Peter & Paul Orthodox Christian Cathedral.

Through shrinking membership and economic downturns, the congregation has weathered many tribulations to become a 21st century vision of the gospel they follow: opening a community center to local groups, clothing and feeding the poor, housing a Head Start program for neighborhood children who can count in two languages.

The resolve sustained them through a single, faithless event that threatened to upend at least some of those goodwill efforts. Last fall, thieves swiped copper parts from air conditioning units atop its school building — leaving costly damage at a site that relies on aid from other parishes to stay afloat.

Supporters have raised about half of their $16,000 goal to replace the devices, but parishioners pray for the rest to overhaul the security system so another break-in won’t push them closer to the edge.

“Every time we hit one of these bumps, it’s made it that much more challenging,” said its rector, the Rev. Paul Albert. “This is not the first time and may not be the last time.”

It hasn’t always been this way at the southwest parish, which diocese officials elevated to cathedral status and considered the oldest Eastern Orthodox house of worship in Michigan.

Founded in 1907 by Eastern European immigrants, the congregation first gathered in a rented facility then moved to its present site acquired the next year, where a wooden church was erected, members recount on its website. An elaborate building with iconography was completed in the late 1940s.

Its story was not unlike other city congregations that emerged in the 20th century through ties between foreign newcomers, said Rev. John Staudenmaier, S.J., an historian and former professor at the University of Detroit Mercy. “Once your people started getting jobs there, you went where your relatives were and hoped to get help. Those churches were very tight bonds that were very durable. Living in the United States if you were not second- or third-generation Protestant was going to be harrowing. And little by little, parishes put together a community of mutual care.” 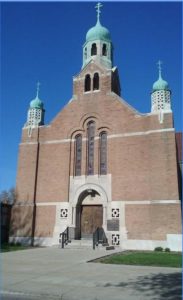 Ten air conditioner units are destroyed onto of the Saints Peter & Paul Orthodox School, like this one.

Yet as holidays and Sunday gatherings passed each year, the close-knit group faced changes beyond the brick walls. Though Ss. Peter & Paul was constructed to accommodate hundreds of parishioners, suburban migration and other trends pushed its current active membership to about 50, Albert said.

The dwindling numbers meant exploring other ways to survive.

More than 20 years ago, the school opened its doors to welcome a Head Start, said Brad Coulter, president and CEO of the nonprofit Matrix Human Services, which oversees the program there catering to low-income children up to age 5.

Today, 66 youngsters are enrolled — many Hispanic and living in the neighborhood, center manager Ishrat Khan said. “We’ve been blessed with great families and wonderful children.”

City resident Mariana Nouel enrolled her daughter as an infant several years ago and was amazed to witness how quickly she learned shapes, colors, and numbers in Spanish as well as English. Nouel now has her son there and revels in how staffers bond with parents.

“It’s something we need around us,” said the retail worker, who was unable to afford day care. “They have really good teachers and they are professional. If I don’t have them, I can’t pay any other place to take care of my kids and I have to quit my job.”

Caretaking marks another aspect drawing many to Ss. Peter and Paul, which has long maintained a community center across the street and started pursuing upgrades around the time of its centennial, said the Rev. Andrew Yavornitzky, former administrator and the dean for the Michigan deanery within the Orthodox Church in America Diocese of Chicago and the Midwest.

An upstairs space was rented out for birthday parties and the like, but “the manpower in the parish can no longer maintain it,” he said.

The center has since granted time to community groups such as Detroit Kitchen Connect and Keep Growing Detroit, Albert said. And in the last five years, Orthodox Detroit Outreach, which includes volunteers from regional parishes, has used the lower level to serve free weekly meals to the public. Members also distribute clothing, hygiene items, diapers and more.

While doling out sandwiches and other goods, volunteers and parishioners connect with visitors — some hailing from hard conditions. 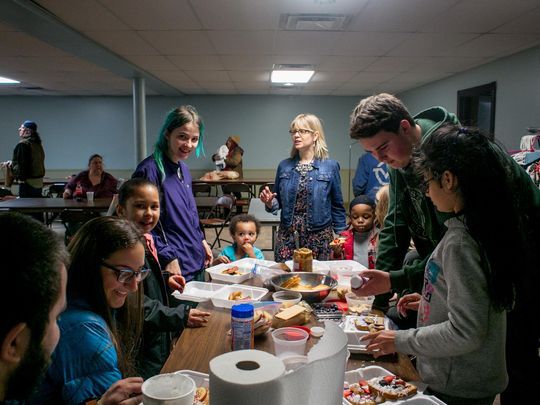 “I’ve had to clean up blood from people’s faces who come in all beat up. I’ve driven them to rehab and picked them up,” said Matthew McCroskery, another Orthodox Detroit Outreach founder and church member since 2016. “We sit down and love them and get to know them… You can serve at a food kitchen anywhere and walk away and never see the people again. Our mission is not just to serve and go away. Our mission is to be there among them. Because we believe very strongly as Orthodox Christians that Christ came in among us.”

That led George Collins, an outreach member who attends another parish, to this year launch a second weekly meal. On Wednesdays, he treks from Troy to prepare the goods and stays to interact with regulars he considers friends.

“We really should be ashamed of ourselves as a society the way we treat people who can’t help themselves,” he said. “If we have the opportunity to give, we should give.”

On a recent Wednesday, before Keep Growing Detroit hosted a vegan soup cooking session, a few diners gathered around tables arrayed with bagged sandwiches, bananas, apples and pitchers of coffee.

They ended the repast with a prayer near images of the Virgin Mary and Jesus Christ. As a violet votive candle flickered, Albert intoned with a small group murmuring lyrics from the “Akathist of Thanksgiving,” which devotees attribute to a martyr: “Glory to you, who send failures and sorrows to us so that we might be sensitive to the sufferings of others.”

Summer Robinson swayed quietly among them, cradling her cooing 5-month-old son. The mother of two, who learned about the church years ago and recently started attending services, is jobless and struggles to provide necessities such as diapers. She loves how the volunteer aids her and others.

“It really does help a lot,” she said while standing near her son. “Everybody is friendly.”

Jeannie Schumacher, who formerly was homeless, saved wrapped sandwiches for later. She credits the center with staving off starvation. “They do a lot for a lot of people,” the 43-year-old said. “I know a lot of people that probably wouldn’t be alive today if wasn’t for them.”

Albert and others wonder who decided to trespass one weekend in late October, disable the security system and reach the school’s rooftop air conditioning units to grab the copper inside. “What’s so exasperating for us is that for a very little amount of money that they would get for the copper, it’s $66,000 worth of damage for us,” he said.

Insurance covered some; the remainder is sought through contributions and the GoFundMe page to bolster protection. “Our fear is: if we don’t do this right, we may be back in the same situation again,” the rector said.

The theft has already affected plans to address other pressing issues on the aging property. Flooding isn’t uncommon, and not far from choir podiums reading “and with your spirit” in Spanish, Albert eyes ocean blue walls crumbling near the echoing nave. “What we’re going to do remains to be seen. It’s a beautiful space and we hope we can save it.”

Ss. Peter and Paul is among a handful of parishes across southern Michigan associated with the Chicago-based Orthodox diocese, Bishop Paul Gassios said. Its focus on urban ministry, he added, is “a wonderful opportunity for future attention. I admire the way they’re hanging in there. It’s a tremendous indication of their perseverance and faith and ability to endure through difficulties.”

Despite those troubles members envision more in the future, including grants from foundations and other resources to remain a beacon, Albert said. “Our primary call is to be here praying, worshiping, serving and trying to have our doors open for people.”

That spurred Laura Kline to join outreach efforts at the community center as well as launch arts and crafts there. The interaction she missed volunteering elsewhere is partly why the Wayne State University professor once considered relocating to the neighborhood from the suburbs.

“It’s very much like a family,” she said. “If it weren’t there, I think it would be a loss for everybody.”