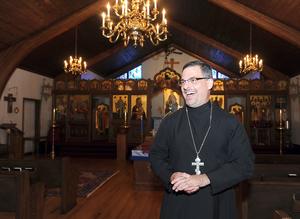 CANTON, OH — Talk to him for a bit, and it becomes apparent that the Very Rev. Stacey Richter is passionate about his faith.

It wasn’t always the case. Once upon a time, the priest of Holy Assumption Orthodox Church at 2027 18th St. NE, was an atheist.

A native of Winnipeg, Manitoba, in Canada, Richter and his twin brother were raised by a lapsed Catholic mother and an atheist stepfather. Their father, who lived nearby, also was an avowed atheist.

“My dad was a militant atheist,” Richter said. “He really did not like Christianity.”

But an absence of faith did not equal happiness for Richter.

“I was miserable atheist,” he said, laughing. “My parents were constantly fighting. There was very little love in my house growing up.”

Richter said that by chance, he heard about a summer camp some friends were attending.

“It happened to be a Bible camp,” he said. “I had never read a Bible, never set foot inside of church.”

What he witnessed would plant a seed.

“I was majorly impressed,” he said. “The people seemed to love one another. That was entirely new for me.”

A second seed would be planted when Richter was 14, and his late grandmother was given a funeral Mass. It prompted his mother to have him and his brother baptized as Catholics at 15.

But Richter said his struggles continued.

“My understanding of faith was in its infancy,” he said. “I didn’t read the Bible. I didn’t have an understanding of the concept of grace. I thought to get into heaven, you had to be perfect. It frustrated me, so I left.”

Richter said he entered the University of Manitoba to study geographical engineering. By then, he was an agnostic.

At the end of his freshman year, Richter said he enlisted in the Royal Canadian Naval Reserve. During a deployment in Victoria, British Columbia, he contemplated suicide.

“I though about suicide all the time,” he said. “The next time we went on the rifle range, I was planning to shoot myself.”

But the training was canceled.

“I was in desperate straits,” he said. “I really wanted to end it.”

During his sophomore year, Richter happened upon a tract from the Campus Crusade for Christ, an international outreach for teens and college-age adults.

“It said, ‘God loves you and has a wonderful plan for your life,’ ” he recalled. “I (dismissed it) but I really wanted to believe that.”

Richter said a debate on campus between a Campus Crusade for Christ leader and a philosophy professor became a turning point.

“I was really impressed with how the Campus Crusade for Christ guy kept his cool,” he recalled. “The philosophy professor turned into a babbling madman. I wasn’t intellectually convinced but I thought, ‘I want what you got,’ ” he said.

“I accepted Christianity. It was a radical change for me. I went from death to life. … For me, it was the unconditional love of God. I wasn’t a cosmic accident or a mistake, though my parents said so. My dad made it clear I wasn’t planned.”

Richter said becoming a Christian set him on a “circuit” of churches: Lutheran, Baptist, Pentecostal, Anglican, non-denominational and back to Catholicism. He hadn’t visited an Orthodox church.

“As I became an active Bible reader, the churches’ doctrines became a problem,” he said. “What brought me to Orthodoxy was early church history, the writings of the early church fathers.”

Richter said the hallmark of Orthodoxy is that it hasn’t changed its doctrine since the Nicene Creed — Christianity’s foundational statement of beliefs — was written in the fourth century. In 1054, the Western church, which was based in Rome, and the Eastern church, which was based in Asia and the Middle East, underwent the “Great Schism,” the result of a dispute over who had papal authority, a disagreement over the insertion of a clause in the Nicene Creed by the Western churches, as well as geographical, linguistic and political differences.

The split resulted in two churches: Catholicism (from which the Protestant Reformation later was spawned) and Orthodoxy.

“It’s not modern in the sense that we’re trying to entertain people,” Richter said of Orthodoxy. “But there’s a lot of prayer and praise and lots of Bible. We have a 2,000-year-old unbroken tradition. It’s neat to feel like you’re part of the same church that you see in the Book of Acts.”

Though Orthodox clergy is all male, it has female deacons. Richter, who has three daughters, surmises that it’s more a matter of culture, history and tradition.

“It’s not that something’s ‘wrong’ with women,” he said.

Celibacy is optional for Orthodox priests, but those who choose to marry must do so before taking their final vows. Richter’s wife, Trudi, grew up in a Mennonite colony in Bolivia. They met at a church camp.

Richter said he felt called into ministry early into his faith journey. A priest for 12 years, he has been at Holy Assumption for four. Prior to that, he was in Minneapolis.

“When I connected with Christianity, my father said, ‘I can’t believe one of my sons could be so stupid!’ ” Richter recalled with a laugh.

Tucked away in a residential neighborhood, Holy Assumption was founded by Russian families. Today, it is part of the Orthodox Church in America and conducts its entire services in English.

“We have a continuous, unbroken history, which is different from any other church,” Richter said of Orthodoxy. “We’re pretty much changeless, but not in the sense of being ‘stuck.’ ” Richter said about half of Holy Assumption’s 70 parishioners are converts.

“Many of them were frustrated with their churches and were looking for something,” he said. “If you’re frustrated, rather than ditching Christianity, give Orthodoxy a try. We’re very different. It’s about the mystery and awe and beauty of God.”

“Father Stacey, a highly trained geological engineer, became a convert to Orthodox Christianity and gave up a lucrative career to seek his passion,” he said. “He attracts people by enthusiasm and great knowledge of the Bible, coupled with a compassion for all people of all backgrounds.”

Asked what he finds rewarding as a priest, Richter replied, “Knowing when I’ve done God’s will and being pleasing to him.

“In God’s unconditional love, I found my purpose: To be God’s child and to do his will.”