Georgia has received plaudits for its response to COVID-19. But as the biggest event in the Christian calendar approaches, the nation finds itself torn between church and state, faith and science. 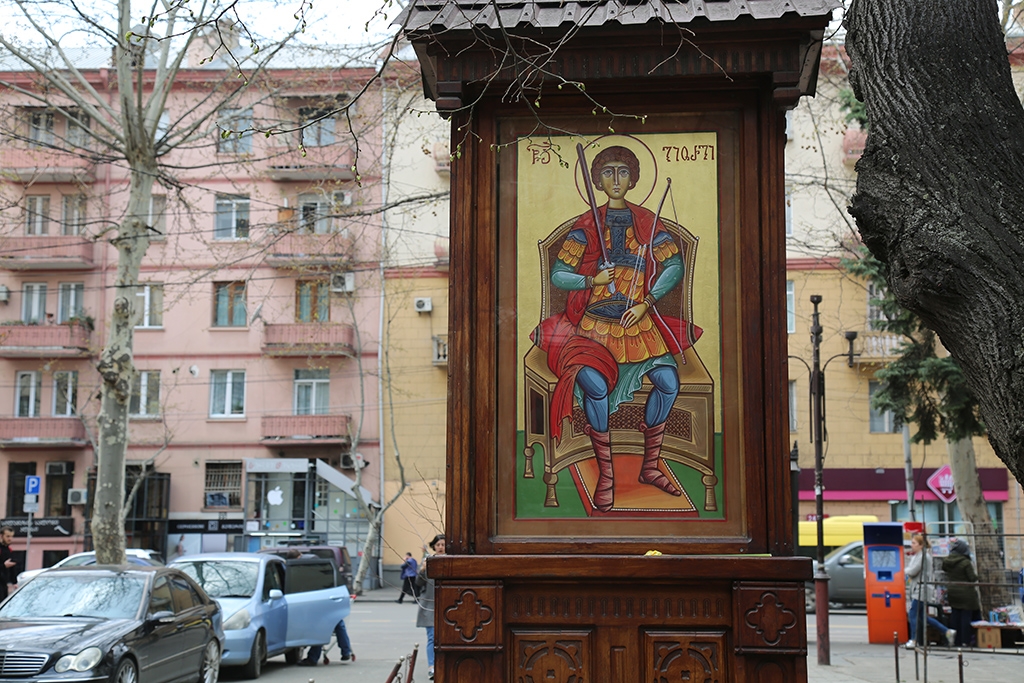 The government is begging Georgians not to make themselves martyrs this year. (Giorgi Lomsadze)

Georgians are counting down to what may be the most troubled Easter in the 1,700 years since the country adopted Christianity.

As cases of the novel coronavirus COVID-19 continue to climb, churches are preparing for an influx on Easter Sunday, which falls on April 19 in the Eastern Orthodox world this year. Despite a state of emergency that is supposed to keep everyone at home, the powerful Georgian Church refuses to cancel services and the government refuses to extend otherwise stringent measures to the Church.

Believers are caught between church and state, faith and science.

The nation’s chief epidemiologist issued a chilling warning on April 15. “We will lose count of the coffins. Is this what we want?” fumed the usually cool-headed Paata Imnadze, deputy head of the National Center for Disease Control, in a televised interview. “I understand this is a great celebration […] but please skip it just this one time for the sake of the country and for the sake of the Church, too.”

But the Church says it owes believers a place for prayer and celebration, and even designed a way to avoid the nationwide curfew. “We’ve decided that parishioners can come to their churches before the curfew hour begins at 9 at night and leave after it is over at 6 in the morning,” said Andria Jimghaidze, a spokesman for the Patriarchate, the holy see of the Georgian Orthodox Church. Easter services normally begin at midnight and last until dawn.

Meeting health officials’ requests halfway, Jimghaidze said that believers at smaller churches will be asked to stay outside in the churchyards, while in larger cathedrals some social-distancing measures will be taken.

“Despite some distancing, the danger is still there, as they [believers]will be in church for nine hours,” Health Minister Ekaterine Tikaradze responded.

If Palm Sunday is any indication, even basic safety measures will be hard to enforce. On April 12, scores of believers kissed crosses, icons, church walls and priests’ hands, and exchanged sweaty banknotes to buy boxwood, the local substitute for palm fronds. Crowds were thin by Georgian standards and some priests tried to herd their flocks outside to prevent crowding.

With many of the services broadcast on television, horrified viewers at home watched open violations of the government’s social-distancing orders. Social media erupted. The secular-minded and moderate believers scolded the Church for its refusal to suspend services and the government for its milquetoast deference.

“Why are not they shutting down the churches during a pandemic?” said defrocked Orthodox priest and respected liberal mind Basil Kobakhidze in a video excoriating Georgia’s lay and ecclesiastic authorities. “The responsibility to protect citizens’ lives lies first and foremost with the state,” he said, adding that officials’ pleas to avoid ritual gatherings are bound to fall on deaf ears in conservative parishes that look to Patriarch Ilia II for earthly guidance.

Indeed, many churchgoers dismiss health officials like Imnadze who implore them to watch televised Easter services at home. To them, church is a safe haven. The sacramental wine they drink – from shared spoons – as a part of the Holy Communion rite is the Savior’s blood, impervious to virus.

“This is a house of the Lord, son, there is no disease here, you journalists should look for scandal elsewhere,” snapped one Palm Sunday worshipper at the Church of the Martyrs St. Cyricus and St. Julitta in Tbilisi, in response to questions from EurasiaNet. “Whatever trials God sends we should accept with gratitude,” her companion added. “This is the time to test your faith.”

Two days later, on April 14, the number of confirmed coronavirus infections jumped by 30, the highest number Georgia has seen in a single day, and continued to climb at the faster rate the following day. Some attributed the swell to Palm Sunday, though the incubation period for COVID-19 is often longer than two days.

A time for dogma, a time for reason

Unlike the Catholic Church and most other Eastern Orthodox Churches, the Georgian Orthodox Church has refused to cancel or meaningfully modify liturgies to avoid overcrowding. If Pope Francis held mass in an empty St. Peter’s on Western Easter, the 87-year-old Ilia II intends to host believers at Tbilisi’s Holy Trinity Cathedral in person.

“You can say we are trying to prove that we are more Catholic than the pope,” commented Kornely Kakachia, director of the Georgian Institute of Politics, a think tank in Tbilisi. Unlike other Christian cultures, “dogmatism has prevailed over pragmatism here.”

Any paschal outbreak could end Georgia’s hard-fought and relatively successful effort to contain the virus. Georgia has only 336 confirmed cases, with 74 recoveries and three deaths, as of April 16. Authorities here acted preemptively and strategically, closing borders and schools, suspending public transportation, and banning weddings and funerals. But the government has not stood up to the Church.

Rounds of shuttle diplomacy between the Cabinet and Patriarchate led nowhere. Faced with an election in October and the choice of antagonizing either the powerful Church by ordering a lockdown or secular-minded voters by condoning services, the government dumped the responsibility on the citizenry. Instead, on April 14 the authorities introduced a 10-day ban on travel between cities in an apparent attempt to mitigate Easter’s pandemic potential.

“I’m convinced that the thoughtful, wise citizen … will not show up in church and heed calls from the government to respect the law,” Prime Minister Giorgi Gakharia said. Yet he insisted churches would remain open on Easter.

Kakachia of the Georgian Institute of Politics says that the state is effectively hostage to religious obscurantism. “The line between the church and the state is blurry. Effectively, we have a state within state,” he said.

Following the collapse of communism, the Church made a forceful comeback under Ilia II. Economic crisis and political unrest during the early days of independence provided fertile ground for new churches to mushroom across the nation.

New rituals of reverence became widespread. People began paying priests to bless their homes, businesses and even vehicles. Lenten menus appeared in confectionaries and bakeries, even in the Georgian franchise of Dunkin’ Donuts. A succession of governments tiptoed around the Church, with political parties’ vying for its blessing.

But now the Church hierarchy is facing the most vocal public criticism in three decades of Georgia’s independence. Even some priests and prelates broke ranks with the Patriarchate. If Easter gatherings turn out to be as calamitous as feared, the Church could learn a lesson not only in public relations, but in Darwinism as well.

Giorgi Lomsadze is a journalist based in Tbilisi, and author of Tamada Tales.

Share. Twitter Facebook Pinterest LinkedIn Tumblr Email
Previous ArticleNearly 20 years after being destroyed on 9/11, a New York City church is being resurrected
Next Article Fletcher Insights: Considerations on COVID-19’s Impact on Religion and the Faithful