[ditty_news_ticker id="27897"] Nearly 20 years after being destroyed on 9/11, a New York City church is being resurrected - Orthodox Christian Laity

St. Nicholas Greek Orthodox Church and the iconography it housed were destroyed in the attack on the World Trade Center. After almost two decades, the church is rising again with new iconography from a monastery on Mt. Athos. 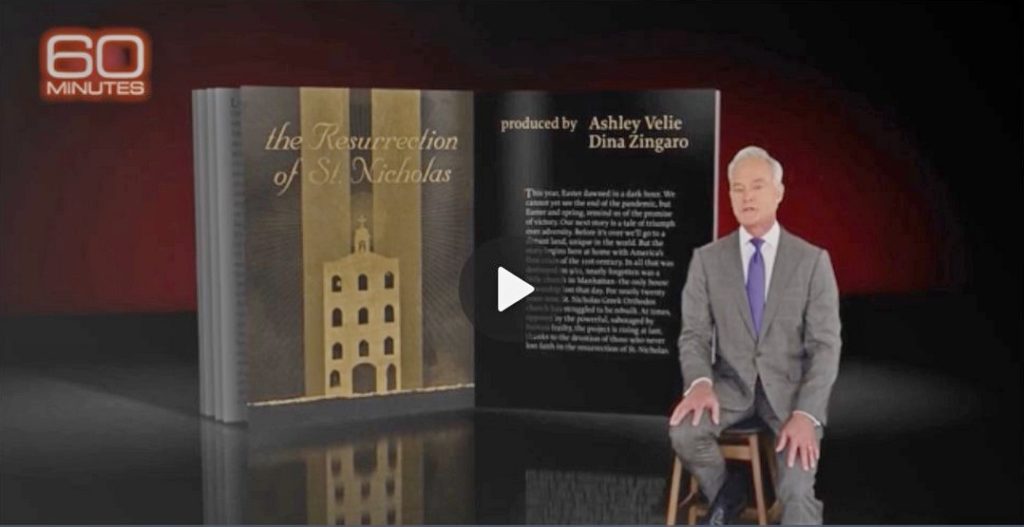 Click on the image above to view the video report.

This year, Easter dawned in a dark hour. We cannot see the end of the pandemic, but Easter and spring remind us of victory. Our next story is a tale of triumph over adversity. It begins with America’s first crisis of the 21st century. In all that was lost on 9/11, nearly forgotten was the only house of worship destroyed that day. For nearly 20 years now, St. Nicholas Greek Orthodox Church has struggled to be rebuilt. At times, opposed by the powerful, sabotaged by human frailty, the project at ground zero is rising at last, thanks to those who never lost faith in the resurrection of St. Nicholas.

In 1922, a tavern found religion. During prohibition, Greek immigrants consecrated a Lower Manhattan bar with a cross. 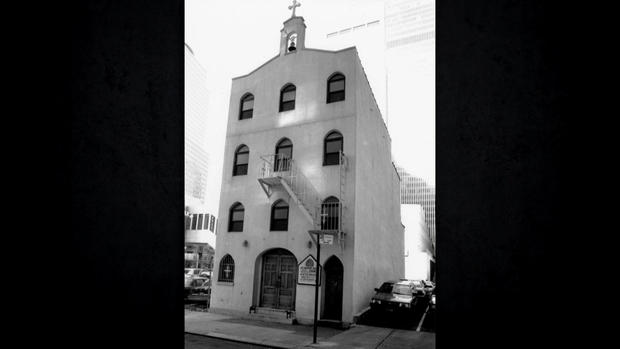 St. Nicholas Greek Orthodox Church before it was destroyed

Bill Tarazonas: The first time I walked in, and alright, I saw that little place in there, beautiful little place, I felt something.

Bill Tarazonas was the last caretaker of St. Nicholas.

Bill Tarazonas: It was my pride and joy.

Bill Tarazonas: That’s the first thing when I walked in, say, “Hi, Uncle Nick. How are you?” That was my thing.

“Uncle Nick” was traditional. The tomb of Jesus was carried through streets on Easter. On the epiphany, the cross was raised from the river, symbolizing the baptism of Jesus. His face was humble but inside there was soul. Rich images of Jesus, Mary and the saints, known as iconography. Developers coveted the land but the lone church stood its ground. 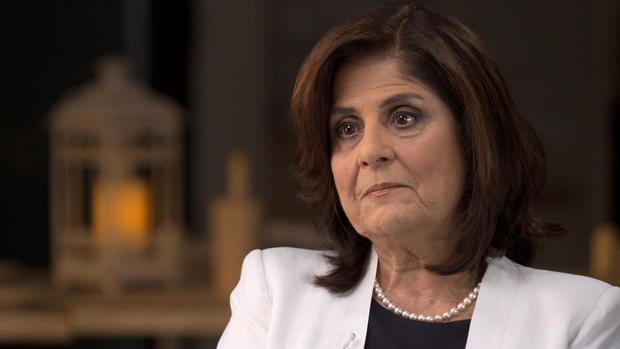 Regina Katopodis: They were set that no one was gonna take their church. My father spoke for all. There was not to be any compromise.

Regina Katopodis’ father, Jimmy Maniatis, was president of the church and frustrated developers for 34 years.

Regina Katopodis: He said, ‘They offered me 15 million dollars and I said no.’ There was absolutely no hesitation about it.

Regina Katopodis: My father was a man of principle. And a church is a body of people. All he had to do was say no.

For eight decades, St. Nicholas remained defiant at 155 Cedar Street, an address that would mark its place in history.

Bill Tarazonas: Before we knew it, hell broke loose.

Bill Tarazonas: The building just went like this. What’s goin’ on here? and then I walk outside. That was the worst thing in my life.

A landing gear wheel bounded into the parking lot. Tarazonas opened his van to find human remains across his seat.

He fled on foot just before tower two collapsed.

Scott Pelley: That’s when you knew that St. Nicholas was gone. 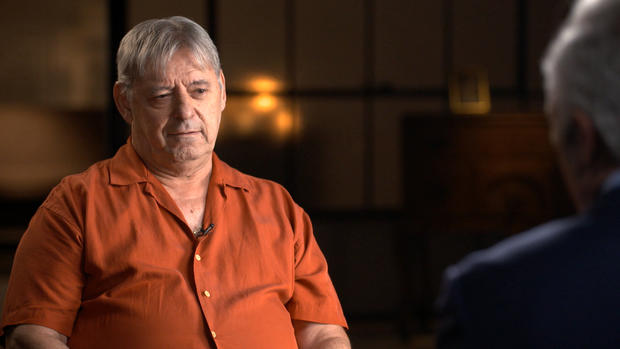 The days that followed yielded only fragments.

Archbishop Demetrios: A group of workers came and they said, “We would like to ask you to pray for us.” I say, “Why?” They said “Here, as we work, we know that we deal also with remnants of human bodies. Please pray for us.”

Among the dead was 31-year-old John Katsimatides, a bond broker in one of the towers, who had discovered St. Nicholas on a lunch hour. His sister, Anthoula Katsimatides, told us his remains were never found.

Anthoula Katsimatides: I don’t have a gravesite to visit. and it’s incredibly difficult, because we never buried anything or, you know, said goodbye.

Scott Pelley: What was it about the church that was so special to your brother?

Anthoula Katsimatides: With all these buildings and concrete, I think that he felt, I know that he probably felt at peace lighting a candle and just saying a prayer for whatever was going on. 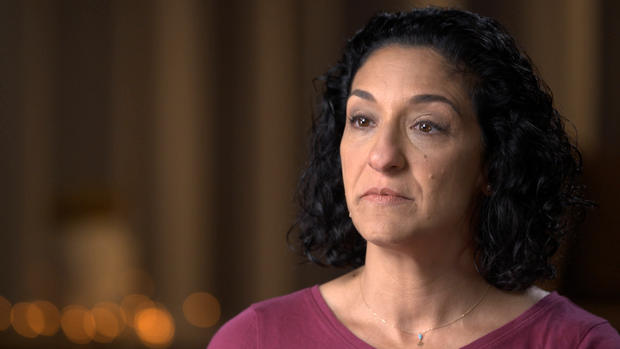 Those buildings and concrete became the 9/11 memorial and plans were drawn for a small domed church, the St. Nicholas National Shrine.

But, as the congregation prayed at the site each year, there were delays and a budget that quadrupled to $85 million. Construction began in 2015. The dome rose a year later. But in 2017, the money, from private donations, ran out. Construction stopped.

Only faith kept St. Nicholas alive, as we discovered 5,000 miles away.

On the Greek coast, Mount Athos is a hermit peninsula of 20 ancient orthodox monasteries. Behind the walls of the Xenophontos Monastery, work on St. Nicholas never wavered.

Father Jeremiah: Xenophontos is one of the oldest monasteries on Mount Athos. The first historical witness we have is from the year 998.

Father Jeremiah hails from a town named for a saint, San Angelo, Texas

Father Jeremiah: This was where God wanted me, and here I am. 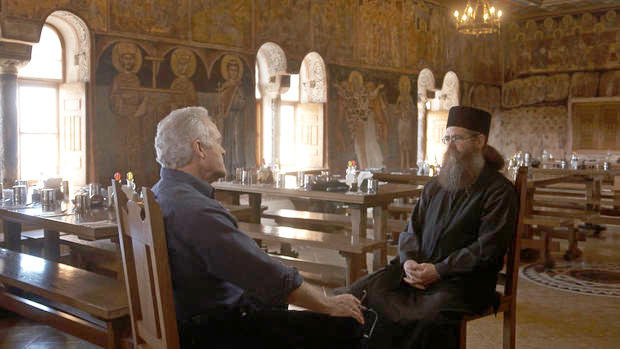 The Xenophontos Monastery is a fortress against time.

Master iconographer Father Lukas is painting the iconography for the new St. Nicholas in the old craft of egg tempera.

Father Lukas: God has called me to do this work. to communicate the spirit of Mount Athos to the people.

Father Lukas shows a piece of icongoraphy that will go to St. Nicholas Greek Orthodox Church in New York City.

Father Lukas granted us an early look at 56 icons for the project. He painted St. Nicholas, by tradition, as the patron of seafarers, lifting a man from a violent sea. But what’s troubling these waters is 9/11.

Father Lukas: I personally want this church, through the iconography to open up a new horizon for people, That they come away with hope. If this happens, the icons will have fulfilled their purpose.

Near Father Lukas’ studio we met the designer of the church at ground zero, Spanish architect, Santiago Calatrava. He’d been to Mount Athos twice before, for inspiration.

Scott Pelley:  You know I wonder, what does an architect see when we walk through this courtyard?

Santiago Calatrava: I believe you see, that you do not need to be an architect, or know a lot about the history of architecture, to, to feel architecture. It’s like music or something like that. You just have to open your heart.

For St. Nicholas, in Manhattan, his inspiration came from the Hagia Sophia, the former orthodox church in Istanbul. Inside, Calatrava sketched an icon of Mary and he thought – since she carried Christ – her body was a church. 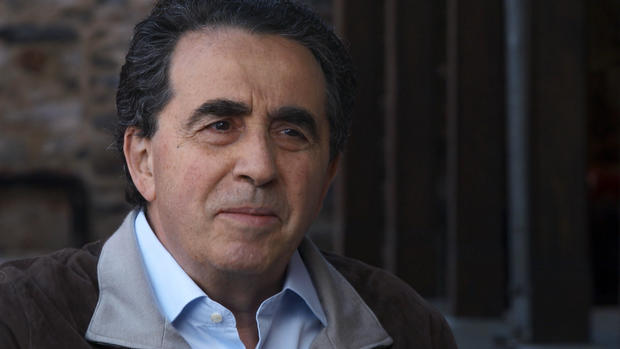 Santiago Calatrava: So there, herself becomes a kind of temple, isn’t it? Containing something that, according to the Orthodox faith, you know, is almost uncontainable, you know? Which is the idea of God.

The vestments of the new St. Nicholas will be white marble, crowned with a translucent dome. At night, it will be a beacon.

Scott Pelley: Why is the light very important?

Santiago Calatrava: You know, light, in my eyes, is to architecture what sound is to music. 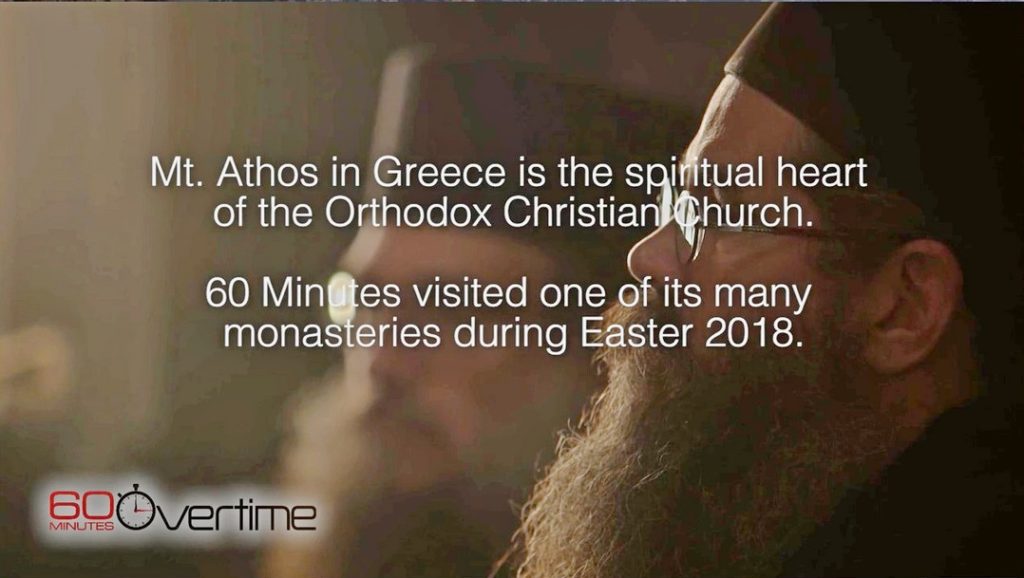 Video of Easter on Mount Athos (Click on the image above)

Light, candlelight, illuminated the Easter celebration on our visit to Mount Athos in 2018. Abbot Alexios led the procession and, at midnight, quoted the angel in the book of Mark, “He is risen, he is not here.”

In the sanctuary, chandeliers were propelled into orbits to symbolize the joint celebration on Earth and in heaven, recalling the psalm, “Praise him sun and moon, praise him all you stars of lights.”

But in Manhattan, there has been little sound or light since construction stopped in 2017. An investigation into finances revealed that millions meant for St. Nicholas were spent on other expenses of the archdiocese.

Scott Pelley: About three-and-a-half million dollars was used elsewhere by the archdiocese. Is that correct?

Archbishop Demetrios: It was a transferring of money from the St. Nicholas to another kind of account. Afterwards we heard about that, I ask, “Why you did that?” I said, “You should not have touched the St. Nicholas money at all for no matter what. It was a mistake, has been corrected.

The money was returned. Last year, Archbishop Demetrios resigned. A new archbishop and New York state named an independent board to raise the last $45 million and manage construction. Fresh hope for Anthoula Katsimatides who lost her brother.

Anthoula Katsimatides: I know that once St. Nicholas opens, my mom and I will visit and say a prayer for John there. a place of love and hope for all family members and for all people from around the world who are gonna come and visit and pay their respects to everyone that died that day.

This past summer, Father Lukas left his refuge on Mount Athos for Manhattan to take the measure of God’s empty gallery. He told us the walls anticipating his paintings represent the most important work of his life. The feeling is familiar to Regina Katopodis whose father had refused to sell the old church.

Regina Katopodis: I’m in it for my dad and for everybody else that has gone and perished and hoping to, with their last breath, that they would be able to see St. Nicholas rebuilt.

Scott Pelley: 100 years from now, what will that little church on the plaza say to the world?

Regina Katopodis: That the good of mankind can conquer evil no matter what.

It was the orthodox church that made the cross the symbol of Christianity. But, during construction, it was discovered the dome of St. Nicholas, alone, had reached the maximum height allowed by a higher power, the Port Authority of New York and New Jersey which controls the site. In another act of salvation, officials decided a few more feet of heaven could be spared. If all goes well, and it rarely has, St. Nicholas will be born again, next year, on the 20th anniversary of 9/11. A monument to death and life and unremitting faith.