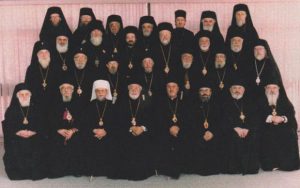 There are still many who believe that the Ligonier gathering in 1994 of most of the Orthodox Bishops in America (represented by SCOBA primates) was an inflection point for Orthodoxy in the New World, subsequently squashed by Mother Churches overseas. Let’s consider for a moment. SCOBA, founded by and presided over by the late Archbishop Iakovos, was never a complete representation of canonical Orthodox presence in America. In fact, it was never a formal component of the the international movement to prepare a Great and Holy Council which could regularize the canonical arrangements of the Diaspora communities. However, SCOBA did work in concert with the international process, guided by the local primates in North America (all of whom were located in the United States).

However, as soon as the Metropolia was transformed into the OCA and there was no universal Orthodox acceptance of this action of the Moscow Patriarchate (MP), things became complicated.Besides Russia, all of the Churches that recognized the ‘autocephaly’ of the OCA were behind the Iron Curtain in 1970: Russia, Georgia, Bulgaria, Poland, and the Czech Lands and Slovakia (only recognized as autocephalous by Moscow until 1998). (The Serbian Orthodox Church does not recognize the autocephaly of the Orthodox Church in America, but does, however, recognize their canonical validity and their status as autonomous.) Additionally, neither the Georgian (as of the present day), Bulgarian, Serbian, or Russian Churches gave up their jurisdictional presence in North America. The MP did give up its seat on SCOBA by an internal arrangement with the OCA. However, when the MP formally asked to rejoin SCOBA officially in 2004, it was not until 2008 that this request was honored, because it was blocked by some of the members.

ROCOR did not join SCOBA at its commencement because the MP was a founding member. When it was reunited with the MP in May of 2007, at a SCOBA meeting it was announced that ‘ROCOR was now canonical.’ My first utterance ever at a SCOBA meeting was to remind all present that ROCOR had always been canonical, even if it had not been not in communion with most Orthodox Churches represented by SCOBA. The MP was represented on SCOBA by a Vicar Bishop of the Patriarch of Moscow who also represented ROCOR, even though the Carpatho-Russian, Ukrainian, and Albanian (two parishes!) jurisdictions of the Ecumenical Patriarchate were afforded their own seats. Nor did the OCA’s Bulgarian, Albanian, or Romanian Dioceses find a seat on SCOBA. The presence of the Jerusalem Patriarchate in the Western Hemisphere and its Palestinian communities throughout the decades was simply ignored. Moreover, the Antiochian Archdiocese claimed all Arabic-speaking Orthodox in the New World as its own, a position reified in the meetings of the SCOBA Study and Planning Commission, the very body that designed Ligonier.

Ligonier had 29 Bishops whose determinations were not revolutionary. In fact, they were in line with the Pre-Conciliar work being accomplished worldwide in preparation for the Great and Holy Council that finally occurred in Crete in 2016. The transformation from SCOBA (with only heads of select jurisdictions) to the Assembly of Bishops (with all active Bishops in the region and which further formed into distinct regions) was logical and in line with the worldwide movement to establish such Assemblies where no single autocephalous Church had sole territorial jurisdiction.

The current Assembly of Bishops has yet to develop a comprehensive plan for Orthodox jurisdictional unity in the United States, as was its mandate when it was created in 2009 (see hereand here). Its leadership has failed to corral individualistic agendas. For example, at one point, the Antiochians refused to participate due to an overseas jurisdictional dispute with Patriarchate of Jerusalem over Qatar. But what has Qatar to do with Chicago?

The popular canard for years has been that it was the Greeks who opposed unity on the basis of their own ethnic fidelity. In truth, and I witnessed it myself, it was the Slavic patriarchal jurisdictions who voiced the greatest objections, whether from concern over newly emigrated populations, or over what is seen as the “liberal ecumenical” positions of the Ecumenical Patriarchate. Thanks be to God that the Assembly of Bishops does not include retired Bishops, for that would expose even worse difficulties! There are a host of canonically suspect actions, sanctioned by local synods of bishops, that are the very kind of thing the Assembly is meant to curb, by examining norms of governance and encouraging adherence to canonical discipline.

The work of Orthodox Unity is not easy work, and it is made more difficult by false nostalgia and false narratives. Having a serious discussion on what it means to be the Orthodox Church in a pluralistic society like the United States means that the Hierarchs of the Church must put the pastoral needs of the flocks entrusted to them first, and find methods and means to work together for the common good of all in accordance with the tradition of the Church.

Mark Arey was a priest of the GOA for over 30 years. His most recent book is “The Gospel of Love: A Meta-Translation” (more at www.markarey.com).

*Public Orthodoxy seeks to promote conversation by providing a forum for diverse perspectives on contemporary issues related to Orthodox Christianity. The positions expressed in this essay are solely the author’s and do not necessarily represent the views of the editors or the Orthodox Christian Studies Center.