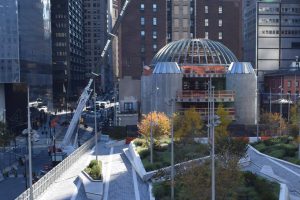 Construction at the site of the St. Nicholas Greek Orthodox National Shrine at Ground Zero in New York City has been halted by the main construction company because the Greek Orthodox Archdiocese of America has defaulted on payments, according to a letter sent by the company to its subcontractors working at the site.

St. Nicholas was the only house of worship destroyed on 9/11 when terrorists struck the World Trade Center. A massive fundraising campaign was undertaken to re-build the church, which was originally founded by Greek immigrants in the early 1900s when the Lower East Side of Manhattan was a thriving ethnic neighborhood.

The Greek Orthodox Archdiocese of America has been rocked by a string of financial scandals over the past several months when it was revealed that monies from various restricted funds were “raided” to pay for day to day operations.

The complete text of the letter:

“Effective December 5, 2017, Skanska USA Building, Inc. (‘Skanska’) has terminated its contract with The Greek Orthodox Archdiocese of America (‘GOA’), on account of GOA’s defaults in making payment under the Owner Contract. Skanska is demobilizing from the Project site.

Effective immediately, you are directed to stop all Work under the Subcontract, both on and off the Project site. Take measures to protect and secure your Work, demobilize from the Project site, and coordinate your efforts with Skanska’s project team.

If you elect not to remove materials or equipment promptly from the Project site, be advised that you may not be able to recover them later. Contact the Skanska project team concerning the transfer or cancellation of any permits you may have procured for the Project.

Skanska is continuing its pursuit of payment from GOA under the Owner Contract, together with any other remedies it may have on account of GOA’s breaches. We will advise you when there is progress toward a resolution with GOA.