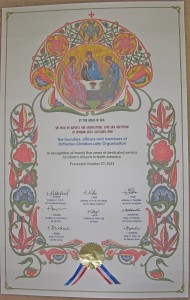 Gramota presented to Orthodox Christian Laity by the Holy Synod of Bishops of the Orthodox Church in America for 25 years of dedicated service to Christ’s Church in North America – October 27, 2012

Click on the image to the left to view the Gramota given by the Holy Synod of Bishops of the Orthodox Church in America to Orthodox Christian Laity in recognition of OCL’s 25th Anniversary.

The text of the Gramota reads:  By the Grace of God, We wish to express our Archpastoral Love and Gratitude by invoking God’s blessings upon the founders, officers and members of Orthodox Christian Laity Organization in recognition of twenty five years of dedicated service to Christ’s Church in North America. Presented October 27, 2012.  Signed: +NATHANIEL, Archbishop of Detroit and the Romanian Episcopate; +NIKON, Archbishop of Boston, New England, and the Albanian Archdiocese; +TIKHON, Archbishop of Philadelphia and Eastern Pennsylvania; +BENJAMIN, Archbishop of San Francisco and the West; +ALEJO, Archbishop of Mexico City and Mexico; +MELCHISEDEK, Bishop of Pittsburgh and Western Pennsylvania; +MICHAEL, Bishop of New York and New Jersey; +ALEXANDER, Bishop of Toledo and the Bulgarian Diocese.