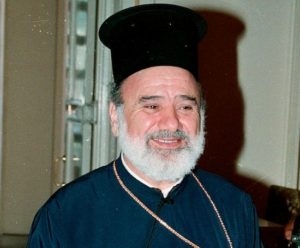 His Eminence Archbishop Stylianos of Australia (Patriarchate of Constantinople) passed away yesterday on the Great Feast of the Annunciation, following a long battle with cancer. He was 83 years old, reports the National Herald.

He labored as the ruling hierarch of Australia for the Greek Church there for more than 40 years, having been unanimously elected and arriving in Sydney in April, 1975.

Having learned of his passing during the Divine Liturgy yesterday, Patriarch Bartholomew of Constantinople offered a memorial Trisagion for the repose of the soul of Abp. Stylianos following the service.

He was known as a hierarch who worked tirelessly to build and develop the presence of the Orthodox Church in Australia and as a sensitive pastor who loved to help the suffering. He was also a staunch advocate against same-sex marriage and abortion.

When the Australian government wanted to introduce gay marriage, the Archbishop organized a protest and gathering of signatures and commissioned a special icon of the Mother of God, Protector of Marriage and an akathist to be prayed before it. He also arranged talks on the Mystery of Marriage.

“As Orthodox Christians, therefore, we are obliged, once again, to express in the strongest possible terms, our objection to the enactment of such legislation, as this will assail the sacredness of the Sacrament of Marriage and the Family, as has been taught to us through the ages by our holy faith and by the Fathers of the Church”he wrote in 2015.

Abp. Stylianos was born in Rethymnon, Crete in 1935. He studied at the now closed Theological School of Halki and was ordained to the diaconate in 1957 and to the priesthood in 1958. He received his Doctor of Divinity degree from the Theological Faculty of the University of Athens in 1965 for his thesis, “The Infallibility of the Church in Orthodox Theology.”

In 1966, he was appointed abbot of the Patriarchal Monastery of Vlatades in Thessaloniki, where he helped to establish the Patriarchal Institute of Patristic Studies and soon became its president. He then completed a post-doctoral dissertation on “The Dogmatic Constitution De Ecclesia of the Second Vatican Council” and became an associate professor at the University of Thessaloniki in 1969.

He was elected as the Titular Metropolitan of Militoupolis and Exarch of the Ecumenical Patriarchate for Mount Athos in 1970, and as the Archbishop of Australia in 1975.

He was widely published in systematic theology and ecclesiology and represented Constantinople to the World Council of Churches and in bilateral dialogues. From 1975, he also taught Orthodox theology and spirituality at the University of Sydney. In 1980, he was elected as the Orthodox chairman in the official theological dialogues with the Catholic church, though he resigned in 2003, publishing the report “The Misfortune of the Official Theological Dialogue between the Orthodox and the Roman Catholics.”

He was also a recognized essayist and poet and received international cultural awards and several honorary doctorates. He was also the dean and founder of St. Andrew’s Greek Orthodox Theological College in Sydney, where he lectured I systematic theology.