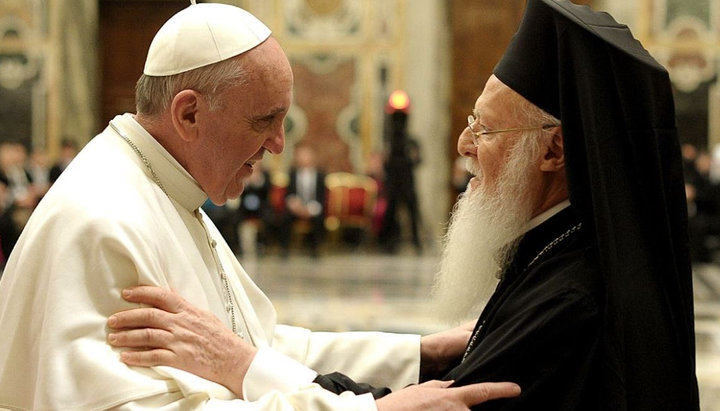 According to the Greek professor Kyriakos Kyriazopoulos, an experiment is underway to papalize Ukraine through the “autocephalous church” led by Epiphany.

Kyriakos Kyriazopoulos, a professor of church law at the Law Faculty of Aristotelian University of Thessaloniki, believes that the Patriarchate of Constantinople has created the OCU with the aim of ecumenically uniting Catholicism with the Orthodox Autocephalous Churches. It is reported by Pravoslavie.ru with reference to the Greek site Oukraniko.

According to Kyriakos Kyriazopoulos, the goal of creating the OCU led by Epiphany is “to weaken the Moscow Patriarchate to enable the unification of Ukrainian Uniates with the so-called ‘autocephalous church of Ukraine’, headed by Epiphany.”

He said that by 2025 a joint meeting of Catholics and Orthodox is planned with a view to unification, while “in June 2019, on the occasion of the patronal feast of the Pope of Rome – the Holy Apostles Peter and Paul – Bartholomew sent a letter to the Pope with an appeal ‘to accomplish by November 2020 a dialogue regarding the primacy of the pope in the 1st millennium’.”

Kyriazopoulos emphasized that the Vatican, through the “Papal Council for the Promotion of Christian Unity”, agreed on the meeting of the Archbishop of the Uniates of Ukraine (Sviatoslav Shevchuk – Ed.) with Bartholomew. It was there that it was decided to further the ecumenical relations between Epiphany and the Uniates in Ukraine.”

He said that “at present the mixed theological commission of the Roman Catholic Church and the Orthodox Church of Ukraine (OCU – Ed.) is discussing the role of the primacy of the pope in the first millennium” and by the end of November 2020 they will “agree on a single text and present it at the ‘council’ of papists and Orthodox to be held in 2025 with the aim of unification.”

The professor believes that the Orthodox will reunite with the Catholics “on the basis of the primacy of the honor of the pope in the first millennium,” which was then recognized as Orthodox.

According to Kyriazopoulos, the Patriarchate of Constantinople and Patriarch Bartholomew in particular seeks to reserve the primacy of power among the Autocephalous Orthodox Churches “through the codex of canons typical for papism.”

However, the professor believes this is a mistake, because “even if he (the pope – Ed.) gives Bartholomew what he wants to have power over what are still the Autocephalous Orthodox Churches, in the future the Pope will cancel it, because it is an ‘ecclesiastical law’, not a ‘Divine law’.”

In the Roman Catholic Church, “unchangeable institutions are referred to as ‘Divine Law’. Patriarchs and archbishops constitute the ‘ecclesiastical law’, i.e. they are interim and can change. Therefore, what he is trying to achieve will be like building a sand-castle which will collapse,” assures Kyriazopoulos.

He emphasized that “the Patriarchate of Constantinople is pursuing the wrong policy and will lose what it has. He will lose the primacy of honor and then the primacy of power, which he seeks to receive through the pope.”

In his opinion, the unification of the Orthodox and Catholics will take place “under the auspices of the Vatican and the Patriarchate of Constantinople” with the use of Catholic ecclesiology, since the “Orthodox one is powerless institutionally and politically.”

“The Vatican wishes and seeks to apply its own ecclesiology, because if it unites with Orthodoxy on Orthodox conditions, it will collapse as a papacy,” said Professor Kyriakos Kiriazopoulos.

Earlier, the UOJ wrote that according to the head of the UGCC, Sviatoslav Shevchuk, the unity of the Uniates with the Orthodox is possible on the basis of recognition of the primacy of the pope, as it is “the truth of faith, which, in the end, is recognized by all who recognize the ancient tradition of Christianity of the first millennium.”