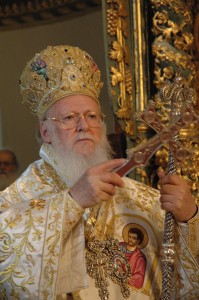 On May 12, 2012, His All-Holiness Ecumenical Patriarch Bartholomew, primus inter pares of the entire Orthodox Church, received the prestigious ‘Freedom Award’. The Four Freedoms Medals are presented to men and women whose achievements have demonstrated a commitment to those principles which President Roosevelt proclaimed in his historic speech to Congress on January 6, 1941, as essential to democracy: freedom of speech and expression, freedom of worship, freedom from want, freedom from fear.

In order to keep the legacy of President Franklin Roosevelt alive, the Roosevelt Institute honors outstanding citizens who have demonstrated a lifelong commitment to these ideals every year. The impressive ceremonies that mark the awarding of the Four Freedoms medals are held alternately in Hyde Park, New York and Middelburg, the Netherlands, where the Roosevelt Stichting, a private foundation, is responsible for organising the ceremony in the even-numbered years.

Roosevelt’s great-grandfather, James Roosevelt, was of Dutch ancestry, from the area of Middelburg, near the Belgian border.

Her Majesty Queen Beatrix and Prime-minister Mark Rutte intend were present at the Four Freedoms Awards ceremony on May 12, 2012, in the Nieuwe Kerk in Middelburg.

The following are brief descriptions of the accomplishments of each laureate; complete biographies for each are attached.

Freedom of Worship Medal
His All-Holiness Ecumenical Patriarch Bartholomew I is nominated for his extraordinary efforts on behalf of religious freedom and his dedication to a dialogue of reconciliation among Christians, Muslims and Jews, which he started together with His All Holiness Pope John Paul II. Bartholomew’s lifetime commitment to secure basic religious freedom, not only for the people in his native Turkey, but also for the peoples of central and Eastern Europe, has identified him as one of the outstanding figures on the international scene who is truly dedicated to the meaning and accomplishment of the Four Freedoms. Patriarch Bartholomew I, also known as the “green Patriarch” gained worldwide respect for his efforts for the environment. See: www.patriarchate.org

International Four Freedoms Award
Luiz Inácio Lula da Silva, Union representative and President of Brazil from 2003-2010, is honored for his extraordinary work on behalf of the people of Brazil. Lula has demonstrated a lifelong commitment to social and economic justice and worked to help foster a climate of peace and reconciliation among the nations of the world. Lula’s rise from abject poverty to the Presidency of Brazil, and his determination to rid Brazil of the extreme poverty and social injustice that for too long has plagued the less fortunate of his countrymen, has been an inspiration to the world community.

Freedom of Speech and Expression Medal
Al Jazeera receives the award for its steadfast commitment to freedom of the press and its longstanding efforts to provide independent, impartial news for an international audience and to offer a voice to a diversity of perspectives from under-reported regions. Al Jazeera’s dedication to this most fundamental human right–the right to the free expression and reportage of issues and ideas–exemplifies the meaning and accomplishment of the Four Freedoms.

Freedom from Want Medal
Ela Ramesh Bhatt is nominated for her extraordinary efforts on behalf of some of the poorest and most oppressed women in India. Bhatt’s sheer determination and lifetime commitment to secure that most basic of human rights –freedom from want– which led her, the “gentle revolutionary,” to found the Self Employed Women’s Association (SEWA) and the Cooperative Bank of SEWA. SEWA has placed Bhatt at the forefront of those working to help women in India lift themselves out of poverty by creating chances for women to be self-employed, work under justifiable circumstances and therefore enjoy financial independance and self-respect.

Freedom from Fear Medal
This year’s Freedom from Fear medal is awarded to Hussain al-Shahristani, Deputy Prime Minister of Energy in the Iraqi government, for his lifelong commitment to democratic values, and his extraordinary efforts to help transform his beloved nation of Iraq into a free, prosperous and stable democracy. After 11 years imprisonment in Abu Ghraib, for his refusal to cooperate in building nuclear weapons and his involvement in “religious activities”, al-Shahristani escaped via Iran to Canada. Al-Shahristani’s commitment to secure basic political and religious freedoms for all Iraqis under the rule of law, has not only endeared him to his fellow countrymen, but has also earned him the respect of the international community.

Thanks to his steadfast adherence to these fundamental values he gained widespread recognition.

His All-Holiness BARTHOLOMEW, Archbishop of Constantinople, the New Rome and Ecumenical Patriarch is the 270th successor of the 2,000 year-old Christian Church founded by St. Andrew the Apostle, which he serves since 1991, and the spiritual leader of over 250 million faithful worldwide. As a citizen of Turkey, Patriarch Bartholomew’s personal experience provides him a unique perspective on the continuing dialogue among the Christian, Islamic and Jewish worlds. He has worked to advance reconciliation among Catholic, Muslim and Orthodox communities in former Yugoslavia and has been supportive of peace-building measures to diffuse global conflict in the Balkans and the Middle East.

His All-Holiness has worked to advance reconciliation with the Roman Catholic Church, the Anglican Communion and other confessions through theological dialogue, while also serving on the Executive and Central Committees and Faith and Order Commission of the World Council of Churches. He also presided over the historic restoration of the Autocephalous Church of Albania and the Autonomous Church of Estonia, while providing spiritual support to many traditional Orthodox countries emerging from decades of wide-scale religious persecution behind the Iron Curtain. He has co-sponsored international peace conferences, as well as meetings on racism and fundamentalism, bringing together Christians, Muslims and Jews for the purpose of generating greater cooperation and mutual understanding.

As the Ecumenical Patriarch Bartholomew occupies the First Throne of the Orthodox Christian Church, presiding in a fraternal spirit among Orthodox Primates. The Ecumenical Patriarch has the historical and theological responsibility of initiating and coordinating activities among the Churches of Alexandria, Antioch, Jerusalem, Russia, Serbia, Romania, Bulgaria, Georgia, Cyprus, Greece, Poland, Albania, the Czech Land and Slovakia, Finland, Estonia, and numerous archdioceses in the old and new worlds.

This includes the convening of councils or meetings, facilitating inter-church and inter-faith dialogues and serving as the primary facilitator and spokesman of Orthodox Church unity. As Ecumenical Patriarch he transcends every national and ethnic group on a global level and has on five occasions convened the leaders of all self-governing Orthodox Churches around the globe, challenging them vigorously to pursue solutions to the challenges of the new millennium, for example, by categorically condemning nationalism and fanaticism.

His efforts to promote religious freedom and human rights, his initiatives to advance religious tolerance among the world’s religions, together with his work toward international peace and environmental protection have justly placed him at the forefront of global visionaries as an apostle of love, peace and reconciliation. In 1997, he was awarded the Gold Medal of the United States Congress. His English-language publications include:

[Originally published by the Press Office of the Orthodox Archdiocese of Belgium, November 19, 2012]

The speeches of the recipients are available here.